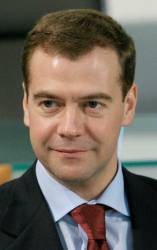 Russian President Dmitry Medvedev has fired two space officials and reprimanded the head of Roscosmos, the Russian space agency, in connection with the loss of three GLONASS satellites earlier this month.

Russian President Dmitry Medvedev has fired two space officials and reprimanded the head of Roscosmos, the Russian space agency, in connection with the loss of three GLONASS satellites earlier this month.

A press statement from the Kremlin today (December 29) said, "Following the report presented to the President by Deputy Prime Minister Sergei Ivanov, a decision was made to remove from the office Vice-President and First Deputy General Designer of the S.P. Korolev Rocket and Space Corporation Energia Vyacheslav Filin and Deputy Head of the Federal Space Agency (Roscosmos) Viktor Remishevsky for the errors made in the calculations for refuelling the vehicle’s Block DM-3 upper stage. Head of the Russian Federal Space Agency Anatoly Perminov was reprimanded."

RKK Energia manufactures spacecraft and space station components and is prime developer and contractor of the Russian manned spaceflight program.

The Proton-M rocket launched from the Baikonur facility in Kazakhstan on December 5 reportedly had been equipped with larger fuel tanks that were then filled to capacity. The heavier load of liquid oxygen — reportedly 1.5 to 2 tons more than normal — apparently caused the launcher to deviate from its planned trajectory and fall into the Pacific Ocean more than 900 miles northwest of Hawaii.

The loss of the three GLONASS-M satellites on board thwarted Russia’s plans to complete its GNSS constellation.

An inter-ministerial commission charged with investigating the launch failure cited an error in the formula, contained in the operating instructions of the fuelling control system, for calculating the necessary amount of liquid oxygen.”

In announcing the commission’s results, Perminov said it would be “necessary to revise the entire existing program for launches in 2011,” in order for the 24-satellite constellation to reach full operational capability.

In response to the failure, two older, spare satellites in the constellation have been activated and moved to new orbital locations. According to Roscosmos’s Central Research Institute of Machine Building (TsNIImash) Information-Analytical Center website, GLONASS had 22 operational satellites as of December 29 — a full complement of eight in each of orbital planes 2 and 3, but only six in Plane 1. Four other spacecraft were reported in “maintenance” status.

Meanwhile, on December 21 the Russian Ministry of Defense announced postponement of the inaugural test flight for the next-generation GLONASS-K satellite until 2011, according to an RIA Novosti news report.

The demonstration satellite, which will broadcast the first GLONASS CDMA signals in addition to the system’s usual FDMA transmissions, had been scheduled to go up from the Plesetsk Space Center on December 28.

“Preparations have not been completed for the ground complex to navigate the GLONASS-K spacecraft,” the ministry’s statement said.