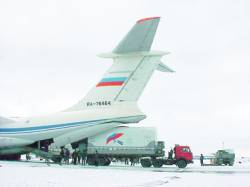 November 2006: One of three GLONASS-M satellites is loaded onto the airplane that delivered it to the Baikonur launch site.

In 2006, the 10-year Russian Federal program to replenish and modernize the navigation system GLONASS was updated with the aim to quickly complete the satellite constellation and make it available to domestic and foreign users.

On December 25, 2006, from the Baikonour launch site, three modernized satellites, GLONASS-M, were placed into orbit by a single launch vehicle.

In 2006, the 10-year Russian Federal program to replenish and modernize the navigation system GLONASS was updated with the aim to quickly complete the satellite constellation and make it available to domestic and foreign users.

On December 25, 2006, from the Baikonour launch site, three modernized satellites, GLONASS-M, were placed into orbit by a single launch vehicle.

The different dates of the satellites’ manufacture and delivery were caused by a “stepwise” production and electrical testing approach adopted at the Reshetnev NPO PM (Academician M.F. Reshetnev Nauchno-proizvodstvennoe obiedinenie Prikladnoi Mekhaniki). This approach arranged the pre-launch campaign at the launch site so that to avoid any “bump” situations.

The block of three GLONASS-M satellites was launched into the intended Earth orbit, at the altitude of about 19,140 kilometers and inclination of 64.83 degrees.

As is known, the nominal orbital GLONASS constellation consists of 24 satellites evenly placed in three orbital planes with eight satellites in each, with the planes shifted by 120˚ versus each other. Today, the first and third planes are almost completed; therefore the block of three satellites was launch to be placed in the second plane.

After the three satellites were simultaneously separated from the booster, radio contact with each of the satellites determined their status and orbital parameters (the separation took place within the GCS radio visibility area). The Ground Control Segment (GCS) comprises several ground control stations located both in European part, and in Siberian and Far Eastern part of the Russian Federation (see Figure 1). (To view the figures and tables for this story, please download the PDF version using the link at the top of this article.)

The GCS control stations are equipped with large-scaled, full-step antenna systems featuring spot patterns, thus ensuring a reliable transmission of control commands and reception of telemetry downloaded by a satellite in all operational modes, including any non-oriented mode and large angular velocity that occurs after separation.

Being separated simultaneously, the satellites are very close to each other in orbit, thus preventing GCS facilities to reach three satellites at a time due to the mutual radio interferences. Therefore, a mode of alternate radio contact takes place. Such a satellite control technology stipulates a step-by-step implementation of the satellites into the system.

The damping mode and the sun-acquisition mode are conducted autonomously, using the on-board computer. The Earth Acquisition Mode is conducted with direct GCS involvement. However, the station-keeping and a satellite drift to the intended orbital slot are conducted with the direct GCS involvement, as these operations are required to ensure permanent control to accurately put a satellite into its operational slot within the orbital plane.

The satellites launched on December 25, are now at their orbital slots (see Figure 2).

Considering that the current constellation also comprises satellites with shorter lifetime (GLONASS satellites), the Russian Government has adopted directives aimed at accelerating the replenishment and commissioning of the GLONASS constellation to the benefits of domestic and foreign users.

Based on those directives, the Russian Federal Task Program addressing the replenishment and modernization of the navigation GLONASS system has been updated. These directives have set 2009 as the full deployment date of the 24-satellite constellation in 2009 and ensured the financial support to meet that date. The updated program requires the speeding up of the satellite production and launch rates by as much as twice. Figure 3 summarizes the predicted deployment of the GLONASS orbital constellation.

This year NPO PM will manufacture six GLONASS-M satellites to be launched in 2007.