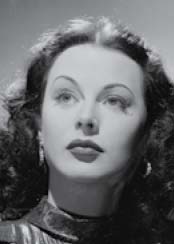 And that, indeed, the two artists invented the "frequency hopping" method of radio signal transmission, later to be known as "spread spectrum."
As they explained in their patent application:

And that, indeed, the two artists invented the "frequency hopping" method of radio signal transmission, later to be known as "spread spectrum."
As they explained in their patent application:

“This invention relates broadly to secret communication systems involving the lie of carrier waves of different frequencies and is especially useful in the remote control of dirigible craft, such as torpedoes. . . Briefly, our system as adapted for radio control of a remote craft employs a pair of synchronous records, one at the transmitting station and one at the receiving station, which change the tuning of the transmitting and receiving apparatus from time to time . . . we contemplate employing records of the type used for many years in player pianos, and which consist of long rolls of paper having perforations variously positioned in a plurality of longitudinal rows along the records. In a conventional Player Piano record there may be 88 rows of perforations. And in our system such a record would permit the use of 88 different carrier frequencies, from one to another of which both the transmitting and receiving station would be changed at intervals. . ."

How did it happen?

Hedy Lamarr, born Hedwig Kiesler in 1913 or 1914 to a Vienna banking family, did not study electrical engineering. She studied at Max Reinhardt’s famous Berlin acting school and was the first actress to appear (tastefully) nude in a major motion picture, Ekstase, in 1933.

The year of his marriage, Mandl was embroiled in a notorious illegal arms transport scandal, the “Hirtenberger Waffenaffaire,” in which his company smuggled German and Austrian weapons out of the country under Swiss labels.

The company made shells and grenades as well as aircraft from the mid- 1930s on and supplied arms for Mussolini’s 1935 invasion of Africa. Mandl was also interested in control systems. He frequently entertained key buyers and sellers of arms — as well as Hitler and Mussolini themselves — during the runup to World War II.

The bright Madame Mandl’s role as hostess provided her link to discussions of weapons technology and, most likely, radio-controlled torpedoes and the need for an anti-jamming device.

Within four years of her unhappy marriage, Madame Mandl had escaped her domineering husband and sailed to the United States, where she eventually became a citizen in 1953.

She continued her acting career for film factory Metro Goldwyn Mayer, whose legendary boss, Louis B. Mayer, renamed her “Lamarr.” His publicity department marketed her as “the most beautiful girl in the world.”

Meanwhile, George Antheil had been composing movie scores in Hollywood since his return from Europe in 1933.

Antheil was born in Trenton, New Jersey in 1900. In the 1920s, he joined the Lost Generation in Paris, where he lived above Sylvia Beach’s famous Left Bank bookstore, Shakespeare & Company. He made a name for himself as a daring composer and concert pianist in Paris and Berlin.

He said of his most famous piece, “Ballet Mechanique is the first piece of music that has been composed OUT OF and FOR machines, ON EARTH.”

The Paris Tribune announced the first performance in 1924, saying, “Paris will hear the strident screech and crash of giant machines evocative of modern industrial America very shortly . . . Ballet Mechanique. . . will be played on four player pianos simultaneously, with electricity as the motive power and a further volume of sound supplied by four electric bells, and two electric motors driving a steel propeller and a wooden rattle. . .

In 1940, the renamed Hedy Lamarr met Antheil at a Hollywood party. The two made a perfect pair — technologically if not romantically.

Lamarr had an idea for an anti-jamming device for radio controlled torpedoes. Antheil’s artistic use of machines foreshadowed the electronic age. A 1990 Forbes magazine article on the pair said, “Antheil understood instantly that synchronizing a series of split-second hops between radio frequencies would be no more difficult — than synchronizing player pianos.”

Lamarr talked about quitting MGM and working for the National Inventor’s Council (NIC), a government agency formed during WWII as a technology transfer link between citizen inventors and the military. She submitted her concept, and the NIC encouraged Lamarr and Antheil to develop it into a patentable idea.

Hedy Lamar filed the patent as Hedwig Kiesler Markey, her name in private life during her marriage to screenwriter Gene Markey. For years, no one made the connection between the patent holder and the movie star.

The War Office immediately classified the new invention, and the patent lapsed 17 years later. Lamarr and Antheil apparently considered it their contribution to the war effort and neither made money from their brilliant idea until 1998, when wireless technology developer Wi-LAN, Inc. acquired a 49 percent claim to the patent from Lamarr for an undisclosed amount of stock.

Lamarr made many films, most notably Samson and Delilah (1949). In 1997, three years before her death, she was honored by the Electronic Frontier Foundation for her contributions to wireless technology. The EFF is a civil liberties advocacy organization that investigates, among other things, patent abuses.

Today, No. 2,292,387 is considered the foundational patent for spread spectrum technologies.

And the story behind it is every bit as good as “Casablanca.”

This article appeared in the September 2006 issue of Inside GNSS as a sidebar to the Working Papers column on spread spectrum: The Galileo Code and Others