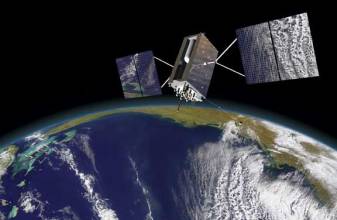 The Air Force has sharply recast the contest to build up to 22 additional satellites to fill out the GPS III constellation, slashing the maximum funding for the first phase of a “recompete” from $200 million per award to a scant $6 million.

The Air Force has sharply recast the contest to build up to 22 additional satellites to fill out the GPS III constellation, slashing the maximum funding for the first phase of a “recompete” from $200 million per award to a scant $6 million.

The department is also changing the rules of engagement, opening up the full competition to GPS III prime contractor Lockheed Martin and its navigation payload supplier Exelis. Additionally, the agency is expanding the first phase — which is designed to demonstrate that would-be competitors have the necessary capabilities — to include as many as three companies instead of just two. The deadline for submitting statements of capability is just a few days away.

The new approach is a dramatic departure from the plan laid out last year when the Air Force planned to award recompete Phase 1 contracts selected from among field of entrants from which Lockheed Martin and Exelis were specifically excluded. The contest itself was widely viewed as a message to the two companies, which had earned the Pentagon’s ire when problems with the payload caused delays that helped blow the program’s schedule.

In the original 2014 version of the recompete, the first phase would have been worth as much as $200 million if all the options were exercised. The winner or winners of round one were then to spar with Lockheed Martin and Exelis for the final award.

But the “time, available funding, schedule, requirements and deliverables have changed,’ officials said. They are asking interested industry sources to “help the Government refine its market research” in light of the revisions to the acquisition strategy.

The Air Force now will award a maximum of $6 million per company for Phase 1 but the tasks are markedly different. The initial plan was to have the selected firms go as far as completing critical design review. Under the new approach the entrants must demonstrate that they have, or can attain, a long of capabilities, including the ability to produce an average of two satellites a year (down from an average of two to three per year).

It appears that the hopeful contractors must be able to prove their ability, in Phase 1 instead of Phase 2, to build satellites that include “the current GPS III SV01-08 baseline with the addition of redesigned Nuclear Detonation Detection System (NDS), Search and Rescue/GPS (SAR/GPS), and Laser Retroreflector Array (LRA) payloads, Unified S-Band (USB) compliance, Regional Military Protection capability and no changes to the GPS Next Generation Operational Control System (OCX) or Military GPS User Equipment (MGUE) interfaces.”

The announcement comes on the heels of a report by the Government Accountability Office (GAO) saying that the GPS III program was over budget and behind schedule, primarily because of the late delivery of the mission data unit (MDU),  the heart of the GPS III navigation payload. The overall price of the program, in 2015 dollars, had climbed from $522 million in May 2008 to $581 million by the end of 2013, the GAO wrote.

In response to questions from Inside GNSS, a Global Positioning Systems Directorate spokesperson said the flight MDU was delivered to the GPS III factory in Denver on March 8. The spokesperson forecast that formal qualification of the MDU hardware would be completed by the end of May, with software qualification finished in July. The spacecraft thermal vacuum environmental test with all the integrated flight hardware, including the MDU, is scheduled to occur between June and September 2015.

No new projections are available yet, however, for the constellation’s final cost. The GPS III program staff was expected to complete its Over Target Baseline (OTB) analysis at the end of March, the spokesman said. At that point the Air Force Cost Analysis Agency will estimate the revised program costs.

The program’s budget and schedule challenges were part of the discussion during a “deep dive” program review requested with Frank Kendall, the under secretary of defense for acquisition technology and logistics, spokesperson said. That review, which one expert who follows the program suggested set the program on its current path, was completed on March 11.

The deadline for submitting statements of capability in response to this request for information is April 20.

The request for proposals (RFP) for the recompete Phase 1 contracts is expected to be released before the end of September and up to three fixed-price, Phase 1 contracts may be awarded by the end of March 2016. The winning companies will have up to 38 months to complete their work.

The request for proposals for the production phase is planned for the second quarter of fiscal year 2017 (Q2 FY17) with a final award in FY18. Though the final details are to be determined, the first satellite is to be delivered in FY23.

The new “sources sought” solicitation (solicitation number is FA8807-15-R-0003) was posted April 10 by Air Force Space Command. An industry day where interested companies can ask questions about the program will be held April 27.  More information is available to registered potential contractors through a link on the solicitation announcement.