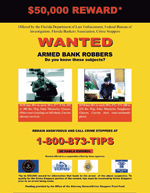 Bank robbery in the United States is nearly as old as the country itself. According to Ron Avery, writing for ushistory.org, the first such robbery occurred in 1798 with the loss of the then-enormous sum of $162,821.

The concentration of generally unidentifiable and readily convertible cash forms an irresistible temptation to both the novice and hardened criminal. As legendary robber Willie Sutton explained when asked why he robbed banks, “That’s where the money is.”

Bank robbery in the United States is nearly as old as the country itself. According to Ron Avery, writing for ushistory.org, the first such robbery occurred in 1798 with the loss of the then-enormous sum of $162,821.

The concentration of generally unidentifiable and readily convertible cash forms an irresistible temptation to both the novice and hardened criminal. As legendary robber Willie Sutton explained when asked why he robbed banks, “That’s where the money is.”

Coupled with the banking industry’s policy directing employees to cooperate with a robber’s instructions (to help protect both the teller and customers from harm), that simple and sublime logic establishes bank robbery as one of the most profitable theft scenarios. According to a 2002 special report by the U.S. Federal Bureau of Investigation (FBI), a total of $469,815,218.10 was reported stolen in U.S. bank robberies between 1996 and 2000.

According to a recent FBI report, bank robberies made up only 2.4 percent of total crime incidents in 2004, but that percentage still represented more than 9,600 bank robberies. Furthermore, the average loss per bank robbery was $4,221, which was more than three times the average for all robberies that year.

However, cooperation does not imply that banks are simply abandoning their responsibility for protecting their customers’ capital. Quite the opposite; the banking industry has employed numerous techniques over its history, employing technology, psychology, and common sense to minimize opportunities of robbers and maximize their chance at recovering stolen cash.

This article describes a system using GPS- and radiobeacon-based positioning, which our company has developed for tracking stolen currency and aiding in its recovery. Since its first field installation in 2003, this system has been deployed in more than 30 robberies with a recovery rate of better than 73 percent — a figure substantially better than the 57.7 percent cited by the FBI as the average “clearance rate” of bank robberies resulting in arrest. This application requires a high-sensitivity device capable of operating inside vehicles under car seats or in a glove box, inside homes or building, and other urban environments.

We will discuss the technology incorporated into the tracking device as well as its design and development and use by law enforcement agencies. The article will also provide a summary of the success of our law-enforcement partners in using this system to apprehend suspects and describe some of the more interesting recovery episodes.
…
GPS Tracking
GeoTrax was formed in late 2002 with the goal, among others, of developing a cash tracker that would overcome the technical and operational limitations of the covert systems used at the time. Consequently, our solution would have to provide a success rate that met or exceeded current systems but without the drawbacks, such as dangerous chemicals or limited coverage.

A couple of significant FBI statistics provided additional guidance to our design of the tracking system. The first is the distinction between “amateur” and “professional” bank robbers. A landmark study by Dr. Yoshio Akiyama written in 1983 discovered that, over a 10-year period, an overwhelming percentage of bank robberies was conducted by individuals without a prior criminal record. It was as if the individual was acting on an impulse as compared to a well-thought-out plan. Obviously, relative inexperience is a factor that can be accounted for in the design of a bank cash protection system.

Another relevant data point from the FBI is the distribution robberies by population. One would expect that cities, with their dense population of both people and financial institutions would be prime areas for bank robberies. However, statistics show little variation by population density in a region for bank robberies. This means that even suburban and rural areas need protection the same as large banks in urban centers.

The system would also require near-real-time position reporting to enable pursuit by law enforcement officers. Latencies of a minute or more could introduce enough target uncertainty in a chase to confuse the pursuers. Tests conducted in trials indicated that the system needed an update rate of 15 seconds or less.

This provided an extremely short interval in which to send location information to some central location then disseminate it to the police in the field. Communication channels would have to be chosen to ensure that a controllable (or at least reliable) latency could be maintained.

In developing the system we had to assume that, given enough time, even an “amateur” thief would detect the smallest device embedded in currency. So, the overall design of the device would have to help prevent its obvious detection within the first 5 to 10 minutes after a robbery, especially in the case of a single perpetrator who may not have time to inspect the stolen cash. This 5-10 minute period is the crucial response time for the police to isolate the location of the criminal. Therefore, precise location as soon as a minute or two after activation is necessary to support effective response by the law enforcement community.

Keep in mind that placing a tracking device employing GPS in a potentially challenging environment — an unknown enclosure, possibly next to the human body, in an unknown orientation — was virtually impossible with off-the-shelf GPS technology in 2002. This would prove to be a critical hurdle in bringing this solution to market. . .

Another aspect of system design would have to deal with location uncertainty. Even the most sensitive autonomous GPS receiver operating at optimal accuracy could produce enough positioning ambiguity to hinder recovery of the tracking pack. To illustrate, consider a scenario in which the police determine that a GPS tracking device is operating in the southeast corner of a parking lot. The pack is somewhere within a 20-meter radius of a given point. Within that radius there are 10 cars; which one do they search? They do not necessarily have “probable cause” to search them all and in some jurisdictions may prefer to get a warrant for a specific car before proceeding.

As a result of such considerations, early in the design process GeoTrax decided to add an RF direction-finding beacon to the tracking device to help law enforcement with the isolation of the pack in such situations.

Based on these observations, plus feedback from marketing partners and potential customers, high-level performance requirements were developed to meet the needs of the banks and law-enforcement agencies. . .

For the full article, including tables, graphs, and charts, please download the PDF (above).