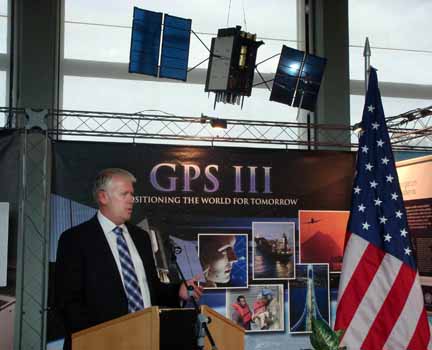 Lockheed Martin has opened a GPS exhibit as a part of the Permanent Space Exhibit of the United Nations Office at Vienna, Austria, to emphasize the importance of satellite navigation technology serving millions of citizens around the globe.

Lockheed Martin has opened a GPS exhibit as a part of the Permanent Space Exhibit of the United Nations Office at Vienna, Austria, to emphasize the importance of satellite navigation technology serving millions of citizens around the globe.

Lockheed Martin sponsored the exhibit in conjunction with the International Committee on GNSS (ICG). The joint government-industry partnership was formed to address issues of compatibility and interoperability of all the world’s GNSS systems, including GPS, and to encourage and promote the use of these GNSS systems in the developing world.

The exhibit will showcase the benefits of GNSS and GPS infrastructure to an audience of more than 50,000 visitors annually to the UN Vienna International Center.

“Lockheed Martin is delighted to celebrate the opening of this GPS exhibit and the on-going work that the United Nations is doing with the ICG to support the use of this system worldwide,” said Rick Ambrose, Lockheed Martin vice-president and general manager of its surveillance and navigation systems business line. “This exhibit represents our enduring dedication to GPS technology that continues to improve not only our world today, but also the world of tomorrow.”

In remarks at the opening of the GPS exhibit on June 14, Dumitru-Dorin Prunariu, chair of the UN Committee on the Peaceful Uses of Outer Space (COPUOS), noted that “GPS III is the first GPS satellite designed to be interoperable with other GNSS system,” adding, “It is therefore fitting that it flies above our heads — a true testament to international cooperation in the peaceful uses of outer space.”

Elected as COPUOS chair for a June 2010–June 2012 term, Prunariu is currently the president of the Scientific Council of the Romanian Space Agency. The opening of the exhibit took place during the 53rd session of COPUOS heldJune  9-18 at the UN Office in Vienna, Austria.

Robert Wood, the U.S. State Department’s deputy chief of mission at the U.S. Mission to the United Nations in Vienna, said, “Lockheed Martin’s exhibit demonstrates how space technology can become meaningful in our daily lives and have significant uses beyond the realm of outer space. This amazing technology clearly merits a place in the permanent space exhibit at the UN.”

Lockheed Martin Space Systems, Newtown, Pennsylvania, designed and built 21 GPS IIR satellites and later modernized eight of those spacecraft (IIR-Ms) to provide enhanced capabilities and performance. In 2008, the team was awarded a $3 billion development and production contract to produce up to 12 GPS IIIA satellites, with first launch projected for 2014.