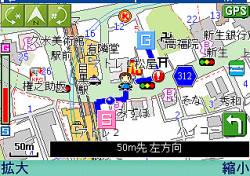 A GPS app on a Japanese smartphone. The GPS Council there told the FCC that any signal degradation could jeopardize the Global Positioning System’s standing as a global standard.

LightSquared has dropped, for now, efforts to expand its wireless broadband plans to markets in other countries, Inside GNSS has learned.

The Virginia firm was working this summer on proposals to the International Telecommunication Union, including one aimed at addressing compatibility issues between ground stations or “complementary ground components” of mobile satellite services and other frequency-using services.

LightSquared has dropped, for now, efforts to expand its wireless broadband plans to markets in other countries, Inside GNSS has learned.

The Virginia firm was working this summer on proposals to the International Telecommunication Union, including one aimed at addressing compatibility issues between ground stations or “complementary ground components” of mobile satellite services and other frequency-using services.

The company is currently fighting to win approval from the Federal Communications Commission (FCC) for a wireless 4G broadband network in the United States that would comprise as many as 40,000 powerful ground stations.

The proposal has been controversial because it repurposes frequencies very close to those used for the much weaker GPS signals. Tests have shown that the network, as originally proposed, would cause debilitating inference to nearly all types of GPS receivers

The proposals to the ITU, however, have been dropped said Jeff Carlisle, LightSquared’s executive vice president for regulatory affairs and public policy.

“My understanding it that [the requests for coordination] are not going forward as U.S positions, and we are not pursuing them,” Carlisle told Inside GNSS.

Carlisle said there was already too much on the agenda for the upcoming World Radiocommunication Conference.

“By standards of typical WRCs this one is incredibly busy. And we also have a lot going on in other areas,” Carlisle said. “I think at the end of the day the decision was ‘Look it is highly unlikely that the U.S. delegation is going to be able to get enough momentum from other countries to be able to move forward with anything other than what is currently on the agenda.’”

Proposal Causing International Concerns, Nonetheless
Though LightSquared’s international ambitions have been put on hold, the increasingly nasty fight over the system’s future in the United States is shaking the confidence of America’s allies and trading partners.

“It was clear from . . . our international partners how absolutely aghast they are that we are even having to discuss this,” said Ruth Neilan of the Jet Propulsion Laboratory. Neilan is a member of the National Space-Based PNT Advisory Board which debated the LightSquared proposal during the its meeting in Washington in November.

The GPS Council in Japan, one of the United States’ closest partners on navigation issues, also has a member on the board. The Japanese underscored in an August 1 letter to the Federal Communications Commission that any policy allowing the degradation of the GPS signal would “raise question[s] as to the integrity of the stated U.S. commitment to maintain GPS as a stable and reliable global standard for positing, navigation and timing.”

Letters expressing grave concerns about the LightSquared network, which has the FCC’s conditional approval, were also sent to the FCC by the International Air Transport Association and the European Commission. The Commission said its own testing confirmed the interference in the radionavigation band used by GPS – the same set of frequencies the Europeans plan to use for their satellite navigation system.

While international agreements allow each country to decide on how to use spectrum in its own country, the European Commission wrote, those nations are “expected not to cause harmful interference to systems of another country.”

“There is a strong feeling . . . in the international community — almost a sense of disbelief – that United States has even allowed this to go this far,” said James Geringer, temporary co-chairman of the advisory board and director of Policy and Public Sector Strategies at the Environmental Systems Research Institute (ESRI). “The US needs to demonstrate stability and respectability.”

The Japanese GPS Industry Council underscored the potential impact of LightSquared’s system on the private sector. Pointing out that Japan and the U.S. are “global leaders in commercial markets of GPS products." Interference from LightSquared transmitters, the Japanese said, could result in “lost markets” and “require billions of dollars of reengineering,”

LightSquared: Separate GPS Receiver Designs Needed
Most of the discussion among GPS receiver manufacturers has focused of retrofitting current U.S. receivers and adapting new devices to allow for LightSquared. Should the project get a go-ahead, however, it has the potential to bifurcate segments of the global receiver market in the same way that the world’s market for cell phones is split.

Martin Harriman, LightSquared’s executive vice president of ecosystem development and satellite business, recently told the advisory board that changes to U.S. GPS receivers to make them compatible with LightSquared could make it necessary for high-precision receiver manufacturers to make one type of device for the United States and another for use internationally to be able to tap essential augmentation services.

“If you want to use a single receiver worldwide and that receiver is filtered so you can’t see part of the band in the U.S. — and yet that (augmentation) service is being provided in that part of the spectrum in, for example, Europe — that would be an issue,” he said. “So you would need to have two types of receivers. You’d have a U.S. certified receiver and a European certified receiver.”

Such changes would almost certainly — but for now, unpredictably — affect those manufacturers planning single receivers that combine GPS signals with those from systems like Galileo, Russia’s GLONASS and China’s new COMPASS constellation.

Aviation users have been particularly worried about the LightSquared proposal and are expected to bring their concerns to Congress in a hearing early next year.

Among those likely to testify is the International Civil Aviation Organization. ICAO pointed out in a June 13 letter to the FCC that the U.S. commitment to provide GPS service for aviation users worldwide forms the foundation of current and future navigation applications. Noting that the international fleet flying into the United States would be “directly affected,” ICAO urged the FCC “to ensure that this vital commitment is not unintentionally jeopardized.”

Though the LightSquared network is now a U.S.-only system, ICAO also suggested “similar developments could arise elsewhere and propagate the disruption.”

Whether LightSquared ever expands to other nations depends on how things ultimately work out in the United States, said Carlisle. “Whenever there is a new service that comes out, there is a lot of international skepticism about it until it works for a number of years, and you see consumers using it, and you see it doesn’t cause a problem. Then it gradually gains acceptance.”