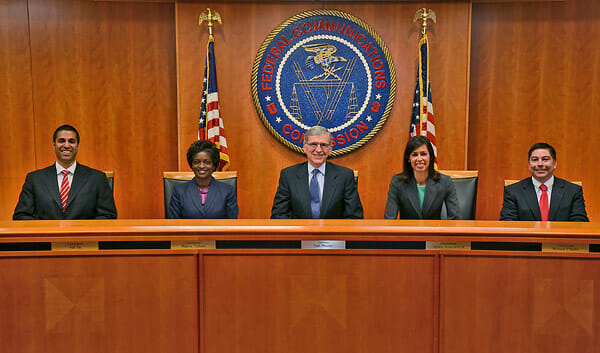 Federal Communications Commission (FCC) officials took a new tack last Friday (June 20, 2014) in their search for frequencies for mobile broadband, kicking off what they said they hoped would become an industry partnership that can find ways to get more out of the radio spectrum while protecting GPS.

Federal Communications Commission (FCC) officials took a new tack last Friday (June 20, 2014) in their search for frequencies for mobile broadband, kicking off what they said they hoped would become an industry partnership that can find ways to get more out of the radio spectrum while protecting GPS.

The meeting was “to bring the parties together and have a dialog on the issues to try to find ways that we can collaborate to help protect GPS and to move in the direction of trying to use the spectrum as efficiently as possible,” said an FCC official, who spoke with Inside GNSS on condition of anonymity.

Although some attendees said they saw the meeting as a first step to better communication, the Workshop on GPS Protection and Receiver Performance alarmed the GPS community when the FCC first announced it — giving a scant three weeks notice.

“I am aware that a number of manufacturers are quite panicked over this because of the possibility of some superposition of, in essence, how you design a receiver for GPS,” Brad Parkinson, acting chair of the National Space-Based Positioning, Navigation, and Timing (PNT) Advisory Board, told the group during its June 4 meeting. This is “something that could vastly affect the whole substance of what we are if carried to the point that someone dictates how you design a receiver,” he said. “I think that’s kind of dangerous.”

But FCC Chairman Tom Wheeler told attendees at the Friday workshop, quite specifically, that that was not the goal.

“Today is about federal and nonfederal leaders coming together to discuss successful industry-driven collaborations and GPS receiver performance. These are not abstract issues,” Wheeler told the audience. “But let me also be specific about what today is not. It is not about FCC-mandated receiver standards. Rather it is about the best way to protect GPS operations in the context of evolving technology and adjacent spectrum activities.”

The daylong discussion looked at the various markets for GNSS devices — some of which were described as “small in nature but large in stature” based on estimates made by the European GNSS Agency (GSA) in 2012 and the dependency of critical infrastructures on the availability of reliable GNSS positioning and timing.

Critical GPS Applications
The wide-ranging meeting then addressed the need for GPS to provide accurate location of E911 calls, setting tighter limits on out-of-band emissions affecting GNSS frequencies, and the use of GPS for the timing of the power grid, the financial markets, and telecommunication network.

“Nobody wants to miss recording the last two minutes [of a TV program],” Marx quipped. “So, to make sure you have very accurate timing, we use GPS.”

Of all of AT&T’s infrastructure, he said, the base stations are the most sensitive to losing GPS and would likely fail within 24 hours without it. “

We require very exact timing for the frequency sharing when you’re talking about LTE bands and the capability for handoff,” Marx said.

Losing the GPS signal would have an even more dramatic impact on public safety systems, said Terry Hall, the immediate past president of the Association of Public-Safety Communications Officials (APCO) International and the communications manager for the York County, Virginia Regional Emergency Communication Center.

A failure would quickly cripple his emergency response system, he said, although it would not knock it off the air entirely.

“From the public safety perspective what happens is, we have some redundancy built into our simulcast systems,” Hall said, adding, “I would compare it to you’re driving a car at 60 miles an hour and you jump out and continue to walk the rest of the way.”

While some systems that use GPS timing could last for days or maybe even weeks, Hall said his emergency system would have to switch to a backup in a matter of seconds.

When asked if the GPS community should consider setting receiver standards, Chris Hegarty, the director for CNS Engineering & Spectrum at the MITRE Corporation, underscored the long lead times needed to implement standards.

“For some communities like aircraft and surveying, the trouble we have is that we’re not going to have a new standard on paper until 2018 — call it 2022, Hegarty explained. “Until 2022 every new Boeing and Airbus is going to fly off with $250,000 worth of navigation equipment, that has three $50,000 GPS receivers and antennas and everything else, and they are going to want to use that for 20 to 25 years. So, you have a timing issue. Even if we all decided today that we wanted to do that, some communities simply aren’t going to be able to get it into place until we’re all dead.”

White House Weighs In for Adjacent Spectrum Users
While acknowledging “the huge value of GPS” and that some applications might have receivers might keep receivers in use for years, even decades, Tom Power, the White House’s deputy chief technology officer for telecommunications, underscored the need for efficient use of spectrum. Is it efficient, he asked, if you have a receiver that is operating in the main GPS band but listening in on another band or affecting the frequencies of nearby users that want to make a change?

Power’s comments reflected the augments that erupted after Virginia-based LightSquared proposed to repurpose spectrum adjacent to the GPS band for a broadband network. That network, tests eventually showed, would have crippled GPS receivers across the country if it had been built as proposed. Even so, said the FCC official, the meeting Friday was not aimed at rehashing the LightSquared debate.

“Whatever ends up being in the ‘adjacent’ spectrum, and I am not fully sure what adjacent is, we have to understand what uses can be made of the spectrum and still protect GPS,” the official said, “So, that is what we tried to focus on today.”

The dialog between the FCC and the GPS and telecommunications industries is going to take some time, acknowledged Julius Knapp, chief of the FCC Office of Engineering and Technology.

“It never was our hope today to solve all the problems in one day,” said Knapp, “but really to start improving the dialogue and identifying issues and how we can all work together collaboratively to the address them.”

The FCC seems to have made at least some headway with some members of the GPS community who said they saw the event as the beginning of a less tension-filled conversation.

“I think this is a great event. It was a great event for both the GNSS/PNT community and the FCC to be talking together,” said Jim Kirkland, president of the GPS Innovation Alliance and Trimble Navigation’s general counsel. “We can only use more of that.”