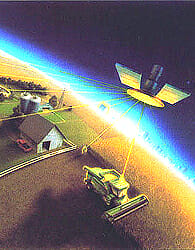 The report concerns economic effects on high precision commercial uses of GPS, such as precision agriculture. (U Calif. photo)

A study prepared by a Washington, D.C.–based economic consulting firm, NDP Consulting Group, “The Economic Benefits of Commercial GPS Use in the United States and the Costs of Potential Disruption,” presented results that assumed two levels of interference: a 50 percent and a total disruption of GPS positioning.

“The direct economic costs of full GPS disruption to commercial GPS users and GPS manufacturers are estimated to be $96 billion per year in the United States, the equivalent of 0.7 percent of the U.S. economy,” the report stated. “This annual total cost is the sum of $87.2 billion and $8.8 billion imposed on commercial GPS users and commercial GPS manufacturers, respectively. GPS user costs consist of $67.6 billion per year in foregone GPS benefits — increased productivity and input cost savings — and another $19.6 billion book value of investment losses in GPS equipment.”

GPS manufacturer costs include $8.3 billion per year in foregone commercial GPS equipment sales and an additional $550 million per year in R&D spending and associated costs to attempt to mitigate the “LightSquared Problem.”

“The stakes are very high,” the study’s lead author, Nam D. Pham, said during a June 22 press conference organized by the Coalition to Save Our GPS, which supported the research effort. “Policymakers must include the costs of GPS disruption in their considerations.”

The study only addressed commercial GPS users and manufacturers — and, consequently, the economic costs of GPS signal degradation to this group, which represents about a quarter of the GPS equipment revenues — not the much larger proportion of the market represented by consumers and military and aviation sectors. For its estimates of the North American GPS market, NDP Consulting relied in part on 2009 market study by ABI Research, “Global Navigation Satellite Positioning Solutions.”

Interference would also imperil more than 3.3 million jobs that rely on GPS technology, including approximately 130,000 jobs in GPS manufacturing industries and 3.2 million in the downstream commercial GPS-intensive industries, although the study does not attempt to assess the costs quantitatively.

The study acknowledges that its evaluation of the harmful economic effects due to interference is conservative and captures only part of adverse consequences.

“Our figures underestimate the full economic benefits for several reasons,” the report states. “First, we have not analyzed the direct and indirect economic impact of GPS manufacturers on job creation and wage generation. Second, GPS equipment produces other social benefits, including emissions reduction (environmental benefit) and reduction in injuries and fatalities (health and safety benefit). Lastly, our estimates do not incorporate commercial benefits such as certain time-value benefits that flow from faster job completion rates, reduced food and other commodity prices, and a higher tax base from which to fund government expenditures.”

The study breaks out the costs of interference on users for precision agriculture, engineering construction, transportation, and other commercial users. (See accompanying table for details.) These sectors often use wideband GPS receivers that recent tests have shown are more susceptible to interference.

"LightSquared would degrade most of our receivers in precision agriculture as far away as 22 miles. Our farmers need clear GPS services in order to remain competitive,"Ken Golden, director of global public reputation strategy for John Deere, said during yesterdays news conference.

GPS benefits typical derive from reduced costs of labor and materials and increased efficiency and productivity. “We estimate that the value to the U.S. economy of the productivity gains and input cost reductions alone amounts to between $68 billion and $122 billion per year, or 0.5 to 0.9 percent of annual U.S. gross domestic product,” the report states.

To illustrate its assumptions, NPD Consulting referred to industry studies, surveys, and testimonials from farmers about a variety of crops grown in different regions under different conditions that found that the use of GPS equipment is associated with yield gains ranging from 3 percent to 50 percent. On the operation side, GPS technology provides crop farming with cost-savings on labor, capital (machine and equipment), and raw materials (seed, fertilizers, pesticides, other chemicals, fuels and oils, electricity).

"[For farmers] GPS is quickly becoming an expectation," said Golden. "Basically, it’s about feeding the world—GPS is a critical part of this."

“During the past twenty years, GPS technology has transformed American businesses and lifestyles with myriad commercial applications across industries and spheres of life,” the report notes. And returning to pre-GPS ways of doing things, would not be easy or even feasible.

For instance, the report cites a recent Trimble survey sent out to 149 users in agricultural, construction, and surveying/mapping industries asking about their operational dependency on GPS technology.