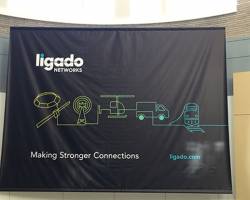 Ligado, which has been in a standoff with the GPS community over interference issues for more than six years, is developing a new high-precision location (HPL) augmentation system for GPS.

Ligado, which has been in a standoff with the GPS community over interference issues for more than six years, is developing a new high-precision location (HPL) augmentation system for GPS.

"Fundamentally it’s a system of terrestrial, high-precision receivers connected to central servers," Casey said, "which run a series of very sophisticated algorithms — collecting GPS-augmented data through an RTK process to deliver higher corrections, therefore taking meters of accuracy down to centimeters of accuracy. "

The company has long provided satellite capacity for GPS augmentation services through its powerful SkyTerra 1 spacecraft and plans to use the spacecraft for this new service. The augmentation information also can be incorporated into, but need not rely on, the terrestrial wireless network at the center of the fight with the GPS community.

That broadband network proposal first came to light in 2010 when the Virginia firm, then named LightSquared, asked the Federal Communications Commission (FCC) to allow it to use its satellite frequencies to support a web of some 30,000 high-powered ground terminals. Those frequencies neighbor the band relied upon by GPS and tests in 2011 showed the LightSquared network would overload the vast majority of GPS receivers.

The FCC put the project on hold early in 2012 and the company filed bankruptcy not long thereafter. It reorganized, emerging from Chapter 11 late in 2015 and eventually changed its name to Ligado. Since then Ligado has been pressing the FCC for approval to build its network. Last year it poured more than $1.5 million into lobbying, according to filings with the Lobbying Disclosure Act database, and it funded studies of its own aimed at convincing the FCC to pull the broadband plan off the backburner.

The HPL effort, however, does not appear to have come up during debate over the network. Of the GPS receiver manufacturers and issue experts who responded to a query by Inside GNSS by press time, the only one to have heard about the HPL service noted that it did not yet appear to be actually on offer to the market.

HPL is still in the testing phase, Casey told the Satellite 2017 audience.

Opportunity
Ligado sees a growing demand for the service aligned with, among other things, the industrial side of the emerging Internet of Things, said a source familiar with the project who requested anonymity to discuss the matter.

While the firm "has supported and currently supports augmentation connectivity offered by current precision GPS providers," said the source, the new service differs in the evolved elements of the HPL network/service and in "the way in which they are structured and integrated in order to address larger-scale opportunities."

The firm is seeking "to create a full HPL service throughout North America that provides pervasive availability and consistent performance anytime and anywhere," the source said.

"Our primary focus at this point," said Casey, "is to deliver those (services) over the satellite network. We have very powerful multi-cast capabilities, so we can isolate the delivery of the corrections to the specific geographic areas where the (precision GPS) rovers are. We believe that gives us a greater level of update interval that can be delivered and support much more scalable deployments."

And the Ground Network?
The proposed services are not intended as a substitute for the earlier plan to rezone the Ligado frequencies.

"It’s really a separate initiative," Casey said in response to a question from Inside GNSS.

Ligado also has been presenting a new satellite-based communication capability that is being developed for drones and other unmanned systems. Expanding satellite-based services, however, will not preclude Ligado from pursuing the terrestrial network, said Tim Farrar, a technology consultant specializing in the satellite industry who has followed Ligado closely. For starters, he said, the company does not have to dip into the frequencies it hopes to use for broadband to support HPL or drone communications.

"In the original conception," said Farrar, "there was going to be 46 megahertz of spectrum in the L band available to Ligado and 40 megahertz of that was going to be used for the terrestrial network. The extra six megahertz would effectively be guard bands around the terrestrial links and they would be able to offer satellite services within those parts of the band. Now if you were close to an adjacent transmitter then clearly you might have issues in terms of limitations — extra noise and therefore limitations on the signal-to-noise ratio or perhaps even not being able to get the satellite service at all if you are right next to a transmitter. But the new revised (broadband) plan uses somewhat less of the spectrum, so there potentially could be some additional spectrum that’s not directly adjacent to Ligado terrestrial operations."

Debt Frames Choices
The new business lines are appearing just as Ligado is reportedly looking for money. Reuters reported March 13 that the company "is working with financial advisers to explore strategic alternatives." According to the report, Ligado has hired investment banks Goldman Sachs Group Inc. and PJT Partners Inc. to help it evaluate options including a potential sale or securing new investment.

Farrar pointed out that, even though substantial growth is expected in the drone market, a drone communications service wouldn’t be sufficient to cover the firm’s obligations and enable it to drop the network plan.

Ligado’s satellite business is generating about $20 million a year in revenue, Farrar said, so a new service supporting unmanned systems "could certainly be material in that context." Even so, he said, it won’t be enough. "It’s not going to be material in the context of $5 billion or $6 billion worth of debt."

There also may be substantial new expenses on the horizon. The company has been working to persuade the federal government to permit it to share the five megahertz of spectrum from 1675-1680 MHz now being used by the National Oceanic and Atmospheric Administration (NOAA). It appears unlikely, however, that such a deal would be a no-cost swap for a particularly problematic set of GPS-adjacent frequencies Ligado said it would forego using.

Inside GNSS has learned that Ligado has gotten at least one piece of good news recently. It completed a required multilateral coordination of L-band spectrum with Telecommunicaciones de Mexico.

Given the convergence of difficulty and opportunity, it seems 2017 could be a pivotal year for both Ligado and the GPS community.

"It’s definitely interesting that this stuff has come up at this point in time in terms of potential transactions," said Farrar. "We’ll have to see how that ties in into the FCC decisions — these new ABC (Assessment) results that are coming out (on March 30) — all of that stuff. It seems like things are coming to a head a little bit."

For more on Ligado, read "Ligado Funds Federal Labs to Boost GPS Receiver Test Stance" on the Inside GNSS website.