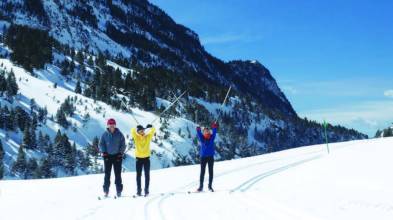 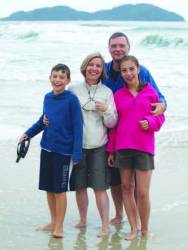 Ismael Colomina, wife Carmina, and children Jan and Eulalia on vacation in Brazil

“Two GNSS-related experiences really impressed me as a young professional and that I’ve never forgotten. The first involved adjusting a GPS-supported (GPS aerial control) aerial triangulation. By getting rid of most ground control points we managed to produce new results.

“Two GNSS-related experiences really impressed me as a young professional and that I’ve never forgotten. The first involved adjusting a GPS-supported (GPS aerial control) aerial triangulation. By getting rid of most ground control points we managed to produce new results.

“The second experience was when I had to compute an INS/GNSS trajectory with ring laser gyros. I was processing data for a hyperspectral aerial survey, trying to estimate a time-position-attitude trajectory to orientate the hyperspectral sensor’s geometric arrays, and all of this under a stiff deadline. We were able to see an aerial hyperspectral image corrected for the platform’s heading, pitch, and roll oscillations.

“Both of these experiences were amazing to me and influenced my professional life significantly, as I eventually became known for applying GPS and INS/GPS to airborne remote sensing.”

What GNSS Product, Application, or Engineering Innovation Would You Most Like to See?

“As a consumer, I dream of a GNS instead of a GNSS, where GNS stands for Global Navigation System. In other words, I would like to see a seamless indoor-and-outdoor positioning and timing capability.

“As a technologist, and after having worked with simulated signals, I would like to see the actual performance of multi-constellation receivers with actual satellite signals.

“As a scientist, I would like to see where miniaturization and modeling of inertial sensors bring us when integrated with multi-constellation receivers.

“And as a citizen of the world, I would like to see . . . some sort of multilateral agreement on the use, coordinated deployment, and funding of the various GNSSs for civilian applications.”

What Popular Notions About GNSS Most Annoy You?

“Many people still do not know the difference between positioning and cartography. ‘My GPS gave me the wrong directions’ is often heard, when the real problem is a bad map.”

“I have always been captivated by apparently simple mathematical constructs — equations, numbers, theorems, or whatever — that can describe complex phenomena in an elegant and powerful way. Physics and engineering would not exist without these simple concepts.”

An example is the topological invariant known as the Euler-Poincaré characteristic χ in algebraic topology.
Roughly speaking,

where F, V, and E are the faces, vertices and edges of a polyhedron respectively. Thus for all spheres χ = 2 and for all toruses χ = 0.

In addition to his scientific mentor Professor Carles Simó at the University of Barcelona, Colomina remembers an extraordinary teacher of mathematics from his school days.

“Ms. Esther Casellas, a physicist, taught me mathematics in a different, modern way. She made me change my mind – I had wanted to become a mechanical engineer, but I decided instead to go for applied mathematics at University.”