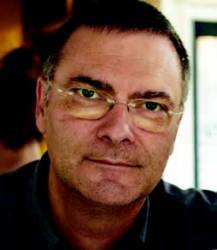 Ismael Colomina began his career in 1982. “So, in a way,” he says, “I grew up as a professional at the same time GPS was growing up and maturing. GNSS has always been present in my working life; so, I never experienced the ‘GNSS, aha!’ moment. Rather, I never stopped thinking ‘GNSS, of course!’"

Ismael Colomina began his career in 1982. “So, in a way,” he says, “I grew up as a professional at the same time GPS was growing up and maturing. GNSS has always been present in my working life; so, I never experienced the ‘GNSS, aha!’ moment. Rather, I never stopped thinking ‘GNSS, of course!’"

For the distinguished director of Catalonia’s Institute of Geomatics (IG), GNSS may well have been an obvious quantity from the very start, but when did he realize that the rest of us had caught on?

“I was on my way to the airport,” he recalls. “Well, actually I was waiting for a taxi to take me to the airport and the taxi was late. I thought I was going to miss my flight. When the taxi finally arrived, the driver blamed his ‘GPS system’ for the delay. He then proceeded to explain to me the principles and properties of GPS.”

Colomina adds, “I thought to myself, ‘A taxi driver is explaining to me the principles and properties of GPS.’ That was when I realized GPS for the masses was here to stay.”

Who Is He?
Since 1998, Colomina has been director of the Institute of Geomatics (IG), a public research center of Barcelona’s Polytechnic University of Catalonia (UPC) and of the Catalan autonomous government.

A mathematician and a scientific software architect, he leads a research unit — Integrated Geodesy and Navigation — that specializes in sensor integration for navigation and orientation.

At the unit, Colomina and his colleagues integrate hardware prototypes and develop software for navigation and orientation. They also develop general software frameworks for optimal parameter estimation from measurements for both real-time (predictive filters) and post-processed (network solvers) solutions.

Discovering GNSS
Colomina began his long association with GNSS in the mid-1980s, long before the GPS satellite constellation had been completed. He was working as a junior researcher at the Institut Cartogràfic de Catalunya (ICC) in charge of evaluating the use of GPS for geodetic network densification and for aerial triangulation.

Researchers had already demonstrated 3D network densification with precise differential GPS. However, introducing GPS as a kinematic surveying tool, that is as a way to determine trajectory so as to replace ground control with aerial control in aerial surveys, was not a straightforward affair.

“Back in the ‘80s, installing a GPS antenna in an airplane, avoiding unintentional auto-jamming, synchronizing the instruments to the GPS time reference frame, and understanding GPS error properties was not easy.”

But he wasn’t alone. Between 1986 and 1988, various groups had been running simulations of GPS and kinematic survey systems. “We had a vision but no data and few satellites, and there was a limited but not negligible dose of skepticism [about the value of GPS for aerial surveying] to go around.”

The vision, he says, was mainly that of Professor Friedrich Ackermann and his team at the University of Stuttgart’s Institute of Photogrammetry (IfP). They had aligned an international group of people and organizations around them, including the ICC.

“We did not have many resources,” Colomina says, “but we had a shared vision, progressive thinkers, and a will to cooperate at the international level.”

And they were young.

“Yes, ICC was full of enthusiastic young people, from the executive, to research and operations levels,” Colomina recalls. “We were able to put into practice innovative ideas quickly. It was a privilege to participate in that kind of creative environment, and to be a part of the world-class team.”

By the end of the 1980s, the Rijkwaterstaat in the Netherlands and the IfP had generated a data set with a GPS precise trajectory, providing the aerial control required to run an aerial triangulation with almost no ground control points.

“It was the start of a new era in photogrammetry,” says Colomina, “the beginning of modern sensor orientation as we know it today.”

Noteworthy Science
Clearly, Colomina has never forgotten what it felt like to be young and inspired. But one feels sure that he is the one doing the inspiring now. Today, the group he leads at the IG continues to break new ground, with research on topics ranging from kinematic track geometry for high-speed trains to planetary navigation.

“In between, we are working on an INS/Galileo/GPS/GOCE airborne gravity determination project, on small unmanned aircraft systems [UAS]-based remote sensing, and on INS/GNSS navigation for UAS,” he says.

The DECIVEL project is just one example, an applied research and technology-transfer initiative in the rail transport sector, conducted jointly with the Spanish company Al-Top. The partners are developing a hardware and software prototype to demonstrate the feasibility of kinematic track geometry as a higher-productivity alternative to traditional static surveying.

In recent years, a team led by the institute won a European Commission research contract for the CLOSE-SEARCH project to develop an unmanned aerial system (UAS) for search and rescue (SAR) applications. (The project was featured in the July/August 2012 issue of Inside GNSS.)

Another ongoing IG project is PERIGEO, a Spanish project partially funded by the public research and development program INNPRONTA 2011-2014, the main goal of which is to investigate space technologies using UAS.

“In space technology testing, these platforms may bridge the gap between computer-based simulation and expensive and risky space missions,” Colomina explains. PERIGEO covers several different technical research areas — from the feasibility study of resistant materials like graphene for space vehicles to hazard detection and avoidance (HDA) techniques for landing on celestial bodies, from robust navigation using traditional sensors such as inertial units or global navigation systems (GPS, Galileo, and so forth) to remote sensing using optical cameras or LIDAR sensors.

Along the way, IG has managed to obtain a patent for a highly integrated GPS, Galileo and inertial navigation system, which it worked on with the Portuguese company DEIMOS Engenharia.

More to Life
Along this busy, achievement-filled journey, Colomina found the love of his life in architect and artist Carmina Wiegerinck, and together they are raising two remarkable children. The couple met in Barcelona one evening during a slide show of one of his recent trips, and they soon realized that they had a lot in common.

“Carmina’s family and my own have both been deeply influenced by war,” he says. “Carmina’s Dutch grandfather emigrated to Brazil before the Second World War started, while her Catalan family had to leave Spain during the Civil War.”

It gets more complicated.

“The two sides [of Carmina’s family] came together in Paris; so, their ‘lingua franca’ is French, although most of them live in Brazil.”

This explains why in their home, from one moment to the next, family members can be heard chattering away in Catalan, French, Spanish, Portuguese, or English.

“We need four languages just to communicate with our relatives!” Colomina says.

Aside from the linguistic juggling, life has posed other challenges for him, especially balancing professional and fatherly responsibilities.

“Over the past 14 years, since I became director of the Institute of Geomatics, I have been working between 60 to 80 hours per week,” he says. “I can’t say I have no regrets; I did not always manage the best balance between home and professional time, but I have a great family that has supported me in my career. They have been generous, and I feel very fortunate.”

Despite that heavy workload, Colomina maintains a variety of outside interests. “I love classical music, starting with Claudio Monteverdi, and opera. Since I married, I have come to love Brazilian music, particularly the great ‘bossa nova’ generation. And, in the seventies and eighties, I was a lover and follower of Catalan folk music, ‘la cançó’, as were many of my contemporaries.”

Hiking is another enthusiasm (“The Pyrenees is where I would be, if it weren’t for my professional activities.”) as is the travel that his worklife makes possible. “When you travel as a tourist, you see the monuments and museums. When you travel as a professional, even if you rush from here to there, you develop a network of colleagues and friends.”

A Richer View
Colomina attributes at least part of his professional success to Professor Carles Simó, an engineer and mathematician at the University of Barcelona who taught Colomina undergraduate courses on numerical analysis and dynamic systems and later supervised his graduate thesis on chaotic dynamic systems and Ph.D. thesis on graph theory for geodetic and photogrammetric applications.

“He was my scientific mentor,” says Colomina.

Since his university days, Colomina has never stopped learning and taking on new responsibilities. For more than 20 years he has led or co-led working groups of the International Society for Photogrammetry and Remote Sensing (ISPRS) Commission I (Sensors and Platforms for Remote Sensing) and III (Photogrammetric Computer Vision and Image Analysis). He has been a member of the German Geodetic Commission (DGK) and, since 2006, the organizer of the biennial workshop “EuroCOW” (the Calibration and Orientation Workshop) on behalf of European Spatial Data Research Network (EuroSDR) and ISPRS.

Colomina says seeing the world through an engineer’s eyes allows him to enjoy life in a richer, fuller way. “I guess I use, more or less, the same appliances and gadgets as anyone else,” he says. “On the other hand, I know the effort, difficulty, and complexity of the technology behind them. As a result, I enjoy modern technology twice: by using it and by experiencing the pleasure of knowing the progress mankind has made to create it.”

But his feelings on the subject go deeper. “Science and technology can be used well or misused. But, globally, there is no doubt that human progress has been due, to a significant extent, to scientific and technological progress,” he says.

“The scientific method tells us the truth because you cannot cheat the laws of nature. And science has always, in the long term, defeated the arguments of dictators.”

Colomina knows something about defeating dictators. In the 1970s, he interrupted his university studies to join the anti-Franco movement. After the dictator’s death, when democracy had been reestablished in Spain, he went back to science.

“There was a time when I felt I had to do something for others,” he says. “I was lucky. I was one among tens of thousands of people fighting for freedom.”

Today, all these years later, he says, “I still believe modern science will help the right ones more than it helps the mighty ones.”