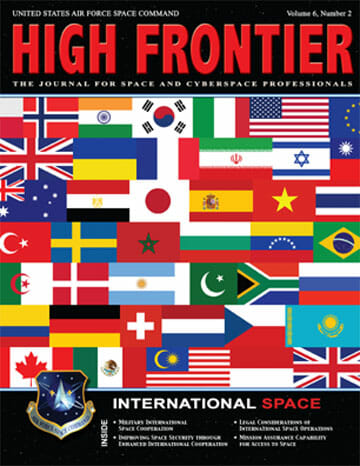 As the United States enters a season of crucial Department of Defense (DoD) policy reviews, GPS may be riding the wave or caught in the ebb tide, depending on how one reads the signs. But a softer line toward cooperative efforts on GNSS may be emerging, if only because of concerns about U.S. dependence on a potentially vulnerable system.

The Quadrennial Defense Review, the Space Posture Review, and program objective memorandums (POMs) that will span fiscal 2012-2016 all are in process. Meanwhile, DoD is pushing for reform of export controls, which have frequently constrained the ability of dual-use technologies such as GPS equipment and expertise to be exported profitably and in a timely manner.

As the United States enters a season of crucial Department of Defense (DoD) policy reviews, GPS may be riding the wave or caught in the ebb tide, depending on how one reads the signs. But a softer line toward cooperative efforts on GNSS may be emerging, if only because of concerns about U.S. dependence on a potentially vulnerable system.

The Quadrennial Defense Review, the Space Posture Review, and program objective memorandums (POMs) that will span fiscal 2012-2016 all are in process. Meanwhile, DoD is pushing for reform of export controls, which have frequently constrained the ability of dual-use technologies such as GPS equipment and expertise to be exported profitably and in a timely manner.

In an April 20 speech to Business Executive for National Security, Secretary of Defense Robert Gates announced strong support for a presidential directive to reform the nation’s convoluted export controls, placing the burden of proof on those who would restrict the export of dual-use products.

Several U.S. aerospace companies have expressed concern that the current system, with multiple agencies monitoring and adjudicating overlapping lists of munitions and dual-use items and technologies, had constrained their ability to compete for business overseas.

A 2009 National Research Council report published in book form, Beyond Fortress America: National Security Controls on Science and Technology in a Globalized World, has gotten a lot of attention in Washington, D.C.
Among its key findings:

·      Designed for the Cold War when the United States had global dominance in most areas of science and technology, the current system of export controls now harms our national and homeland security, as well as our ability to compete economically.

·      U.S. national security and economic prosperity depend on full global engagement in science, technology, and commerce.

Gates said that the administration’s solution would rely on four key reforms: a single export-control list, a single licensing agency, a single enforcement-coordination agency, and a single information-technology system.

“A single licensing entity . . . will streamline the review process and ensure that export decisions are consistent and made on the real capabilities of the technology,” he told the defense contractors. This single entity would also reduce exporters’ current confusion over where and how to submit export-license applications, as well as which technologies and items are likely to be approved, Gates promised.

Earlier, in April 14 remarks at the National Space Symposium, Deputy Secretary of Defense William Lynn repeatedly mentioned GPS in comments about the ongoing DoD Space Posture Review “that is examining each of our space missions and the infrastructure that supports them.”

Earlier this year, the DoD extended the timeline for completing the document, which provides a high-level policy perspective on the entire range of U.S. space assets and capabilities. Reportedly, the agency withdrew a draft version of the review that, according to one press report, suggested “the U.S. scrap building five more GPS satellites and engage European allies on sharing their proposed Galileo global navigation satellite system.”

“The Space Posture Review starts from the premise that space has become congested, competitive, and contested,” Lynn said, later citing GPS as an example of a system in a competitive environment that actually invites cooperation.

“Some satellites work together in systems that many different nations cooperatively run or benefit from,” Lynn said. “GPS is an example of a space technology with widespread benefits.”

(A news report by the DoD’s own American Forces Press Service made Lynn’s comments appear even more welcome to GNSS alliances: “A key to continued progress in space, [Lynn] added, is for countries to cooperate in assets and benefits from space-based systems, citing GPS as a prime example of a technology with widespread benefits.”)

Later, Lynn noted that shared interests open the door to possible cooperation among nations, making a novel observation about the interdependence created by the widespread use of GPS — and perhaps, by extension, other GNSSes.

“Today, the economies of many nations rely on commercial GPS signals for navigation and timing,” he said. “The wide reliance on GPS acts as a deterrent against attack on the constellation of GPS satellites.

“An attack on a U.S. GPS satellite today is in effect an attack on all countries who use it,” Lynn added. “Our strategy must take advantage of the increasingly competitive dynamics of space, and the forms of interdependent relationships they enable. The very presence of interoperable systems might induce international cooperation on a number of levels, including the deterrence of attacks.”

McKinney cited three historical events illustrate the challenges associated with international cooperation in military space, including the unsuccessful effort by European officials in the late 1990s to “reach an agreement for acceptable joint GNSS.”

According to McKinney, the conditions Europe sought to achieve were:
1. A full European Union role in the control of the system
2. A full European participation in its design and operation
3. A fair opportunity for European industry to compete in all aspects of the market

“In the end, such a joint system was not achieved. Some of the conditions just stated were too hard to achieve,” wrote McKinney. “But the concept of cooperation was proposed, and it showed a willingness to cooperate. As we all know now, Europe eventually undertook the development of the Galileo system.”

In a somewhat rueful conclusion, McKinney summarized the missed opportunity this way:

“In the last six years, the US and Europe have cooperated very well in ensuring the GPS and Galileo signals are compatible and do not interfere with each  other. Nonetheless, Galileo is a direct competitor to GPS. It will be a competitor in the civil market, and even though it was proposed to be used for civil systems only, it will surely be a competitor  in the military arena as well.

“One could always speculate  what the situation would be today if the decision on the European proposal was different. However, it does show that with the right protection in place, cooperation may serve a role in increasing our national security.”

The dependence on and vulnerability of GPS seems to be moving up in the consciousness of policy makers. Earlier this year, Gen. Norton Schwartz, Air Force Chief of Staff, told a conference organized by Tuft University’s Institute for Foreign Policy Analysis, that GPS is vulnerable to threats such as jamming and anti-satellite weapons. Schwartz added that he believed the United States should reduce its dependence on the system while developing alternatives for precise positioning, navigation, and timing.