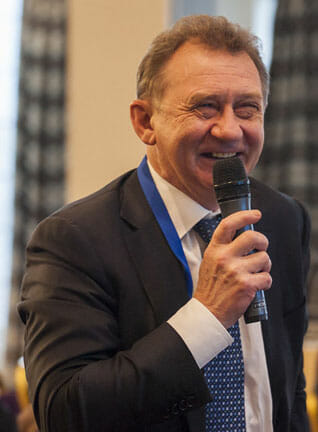 Speakers at the recent International Association of Institutes of Navigation (IAIN) conference in Prague threw into stark relief some of the big GNSS programs and even bigger GNSS questions.

Prof.-Dr. Günter Hein, former head of the European Space Agency (ESA) EGNOS and GNSS Evolution Program Department and Emeritus of Excellence at University FAF Munich, delivered a fact-filled and level-headed presentation on the status of Galileo, the European Union’s civil-owned and non-military GNSS, with slides and information provided by ESA.


Speakers at the recent International Association of Institutes of Navigation (IAIN) conference in Prague threw into stark relief some of the big GNSS programs and even bigger GNSS questions.

Prof.-Dr. Günter Hein, former head of the European Space Agency (ESA) EGNOS and GNSS Evolution Program Department and Emeritus of Excellence at University FAF Munich, delivered a fact-filled and level-headed presentation on the status of Galileo, the European Union’s civil-owned and non-military GNSS, with slides and information provided by ESA.

The civil owner of Galileo, namely the European Commission (EC), working hand-in-hand with ESA, has struggled to keep the program on course and on schedule, but now 10 Galileo satellites are now in orbit, most of which are functioning normally.

Following the latest launch of two Galileo satellites in September, a recent ESA communication states that the next Galileo launch — onboard a Soyuz rocket and the third to take place in 2015 — will go ahead on December 17. It will carry Galileo satellites 11 and 12 now ready and waiting at Europe’s Spaceport in French Guiana.

Hein discussed the status of several Galileo satellites currently on deck, in various stages of preparation, with the next launch to follow the one in December, this time onboard an Ariane-5 rocket, set for October 2016. He also outlined work to finalize the Galileo ground mission segment.

“The program’s top objective,” Hein said, “is to ramp-up, roll out, stabilize and provide committed Galileo services 24/7 to the user community,” all of which goes without saying. But he also laid out the program’s vision beyond full operational capability.

“It may sound a bit crazy,” he said, “talking about a next generation when the first-generation system is not yet operational, but there is a future and we need to plan for it.”

Current work on Galileo’s Next GEN, Hein explained, is concerned first with identifying architecture-evolution drivers linked to mass and professional markets, governmental users, and search and rescue services. Then there is infrastructure evolution, with a clear intent on the part of the program to apply lessons learned.

The program is working to identify performance drivers, assessing key architecture building blocks and developing new architecture options, and, importantly, putting together a clear vision for where the program wants to go and a concrete transition scenario.

The mission to recover the ill-fated Galileo satellites launched into anomalous orbit last year is continuing, he said, with plans to put them to the best possible use, whatever that may be, although they will probably never be able to fulfill their originally intended functions.

Four More Years!
We now know that only days ago Carlo des Dorides was re-elected for a second term as GSA Executive Director by the EU member states.

Given the somewhat rocky history of the GSA and its predecessors — the Galileo Joint Undertaking and Galileo Supervisory Agency (the original GSA) — this is a positive sign for the agency. Whereas faces and personalities tend to pop in and out of the EU space family portrait, des Dorides has become a reassuring fixture, a positive persuader who speaks with a steady and lucid voice for the Galileo program. We know of no one who has an unkind word to say about him, and in old Europe that’s huge.

Speaking of faces popping in and out, Elzbieta Bienkowska is said to be doing “OK,” with a whole lot on her plate as the still-fresh commissioner for Internal Market, Industry, Entrepreneurship and SMEs — EU space affairs being part of her responsibilities. Actually, she doesn’t seem to spend a lot of time talking about space, but that may come.

Also entering the EU space fray is Lowri Evans, new director-general for the corresponding internal market, industry, etc., EC organization known more briefly (and optimistically) as DG-GROW or sometimes DG-Growth. Evans, a British qualified chartered accountant who moved over from heading the Directorate-General for Maritime Affairs and Fisheries, takes over from Daniel Calleja Crespo and is said to be energetic yet efficient, positive, and businesslike.

Lowri’s appointment has been characterized as demonstrating EC President Juncker’s commitment to improving the gender balance among European Commission senior management. Indeed, the Commission has pledged to increase the number of female managers to 40 percent by the end of Juncker’s mandate.

The Truth about Russia-U.S. Relations
Completing the presentations by non-GPS heavy-hitters, Sergey Revnivykh of ISS-Reshetnev’s GLONASS Directorate related Russia’s ongoing program aimed at improving GLONASS performance, including space and ground segments. Another impressive set of accomplishments and intentions were detailed.

Revnivykh insisted on describing GLONASS as part of a wider multi-constellation system, but then he also pointed out that the two biggest parts of that system are not talking to each other, at least officially.

“Our work with the U.S. is currently a bit suspended, but we have agreements that we are implementing,” Revnivykh said. Ray Clore, representing the U.S. National Coordination Office for Space-Based PNT, acknowledged that official U.S. policy, since the Russian incursion in Crimea, still decrees that no bilateral cooperation in many areas, including GNSS affairs, take place between the two countries.

Revnivykh says the truth is the U.S.-imposed suspension has only affected activities on the political level — the signing of joint statements and such. “But at the expert level, which is the only level that really matters, we have never stopped working together,” he assured.

For example, Revnivykh and the U.S. State Department’s David Turner, co-chair the multilateral the International Committee on GNSS (ICG) Working Group A on GNSS compatibility and interoperability “We must work together. Our systems are being used at the same time by the same end-users,” Revnivykh says.

How to end the suspension? “We have to find common interests,” Revnivykh said, making light of recent moves in the United States to require American users of “foreign GNSS signals” to get a license. “This hurts only the U.S. user,” he said. “It makes no sense. It is only a political move. It doesn’t affect Russia.”