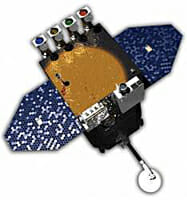 This year’s Space Weather Workshop — held April 27–30 in Boulder, Colorado — reflected a heightened interest in the space environment due to solar effects on GPS and other GNSSes. A solar storm is suspected to have caused the anomaly in Intelsat’s Galaxy 15 communications satellite that carries a transponder for the GPS Wide Area Augmentation System (WAAS),

This year’s Space Weather Workshop — held April 27–30 in Boulder, Colorado — reflected a heightened interest in the space environment due to solar effects on GPS and other GNSSes. A solar storm is suspected to have caused the anomaly in Intelsat’s Galaxy 15 communications satellite that carries a transponder for the GPS Wide Area Augmentation System (WAAS), which has drifted out of its orbital location and threatens to interfere with cable television services on other spacecraft as well decrease WAAS coverage.

Sponsored by NOAA’s Space Weather Prediction Center, the workshop took place as the Earth slowly transitions out of solar cycle 23 and the emergence of cycle 24 is generating much scientific and commercial interest. The event attracted about 370 attendees — customers, users, researchers, and service providers from 15 countries.

Areas of applied research currently focus on developing an understanding of how the Earth’s ionosphere, magnetosphere, and thermosphere interact with solar wind, flares, and magnetism. In coordination with the collection of space-based observations, ground-based monitoring networks are dispersed globally to ensure that collection of atmospheric and ground effects coincide with space-based observations of solar, magnetic field behavior, and auroral oval activity.

Radiation effects on avionics and air crews, as well as interference with communication systems, are a matter of global concern, prompting proposals to include space weather information in operational forecasts for civil aviation. As the Federal Aviation Administration (FAA) develops performance requirements for the United States’ Next Generation Air Transportation System (NextGen), and plans for the Single European Sky ATM Research (SESAR) evolve, the delivery of space weather information is also being included in those designs, with the participation of NOAA and the National Weather Service.

At the workshop, applied research sessions included topics affecting GNSS continuity, availability, and accuracy, as well as GNSS augmentation systems that are crucial for industrial users in agriculture, satellite communications, navigation, spacecraft operations, and electric power. A poster presentation by SWPC researcher Jennifer Meehan analyzed the ways in which more than 600 subscribers to SWPC navigation products apply the information and the need for robust and efficient mitigation strategies to prevent the ripple effect GPS degradation can create.

As complex GNSS applications and commercial dependency on GNSS grows globally, researchers noted that these GNSS systems themselves can be used as tools to help understand the environment that affects their use. Better understanding leads to better forecast models, which in turn can be used to protect those same GNSSes and users.

Meanwhile, there have never been so many missions to the sun as are currently underway.  The workshop included a wealth of new data from NASA’s Solar Dynamics Observatory (SDO) and Solar TErrestrial RElations Observatory (STEREO) missions. SDO is the first mission to be launched for NASA’s Living With a Star (LWS) Program, designed to understand the causes of solar variability and its impacts on Earth. Beginning this year, SDO will fly three scientific experiments to study how solar activity is created and how space weather comes from that activity.

STEREO, launched in 2006, consists of two golf cart–sized spacecraft in heliocentric orbits currently separated by138 degrees of heliolongitude. Instruments on the spacecraft monitor solar wind plasma and magnetic field parameters, energetic particles, radio flux, and provide EUV and visible-light imaging of the corona, as well as novel, visible-light images of the ecliptic heliosphere. The mission recently filmed, in ultraviolet light, the largest solar “prominence” in 15 years, according to the space agency, an April 12–13 eruption of ionized helium. (See accompanying image.)

A roundtable session on “The Growth of the Space Weather Enterprise” encouraged independent commercial ventures to make use of the government and academic space weather communities. The session opened with  a keynote address from former NOAA administrator, Vice Admiral ConradLautenbacher, U.S. Navy (Ret).

Throughout the workshop, space weather modeling and operational forecasting were discussed in terms of meeting user needs, with the last days also focusing discussion on the development of theoretical models themselves.