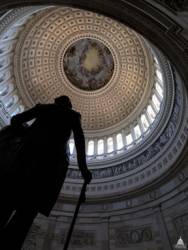 [Updated July 2] Appropriators in both the U.S. House and Senate have slashed next year’s funding for support of the civil portion of the GPS program. Lawmakers halved the portion of the Federal Aviation Administration budget dedicated to supporting the civil signals as well as the ground network monitoring of those signals.

[Updated July 2] Appropriators in both the U.S. House and Senate have slashed next year’s funding for support of the civil portion of the GPS program. Lawmakers halved the portion of the Federal Aviation Administration budget dedicated to supporting the civil signals as well as the ground network monitoring of those signals.

The money is the contribution the civil community pays to the Department of Defense to help offset the cost of civilian-focused GPS capabilities, such as the L1C civil signal, explained one source familiar with the programs. Though DoD originally paid all the bills for the GPS system, civil community funding was integrated into the program in 2004.

“It was meant to give both the civil community and the [Department of Defense] some skin in the game,” said one source familiar with the policy.

The White House, which has underscored its support for the GPS program asked for $40.0 million for fiscal year 2013 — a request that was already $15 million less than the what was planned for in the funding profile still in place just a year and a half ago. The House slashed the FY13 allocation to $15 million and the Senate approved just $19 million. A final number will be negotiated by budget conferees later this summer.

The reason given by the House for their cut was that “there is a significant unobligated balance at the Department of Defense.”

“The [civil and DoD money is all mixed together in order to execute the program,” explained Tony Russo, director of the National Coordination Office Space-Based Positioning, Navigation and Timing.

A query to the Air Force on what the unobligated funds are for, and why they not yet been spent, was not answered by press time. Some slippage has occurred, however, in both the launch date of the first GPS III satellite, which has the new L1C civil signal, and in completion of the Advanced Control Segment which will monitor and control the modernized constellation. The civil GPS contribution supports, but does not completely pay for, these segments of the GPS program.

The cuts this year could be particularly damaging, however, because this is the second year in a row that Congress has underfunded the civil GPS contribution. The request for $50.3 million for fiscal year 2012, which will end September 30, was reduced to just $19 million.

The Senate offered no explanation but the House said last year as well that they were withholding monies due to “a significant unobligated balance in this program” at the Department of Defense. “Until such time as additional funds are needed, the Committee recommends a sharp reduction to this account.”

The House also made an observation in FY12 that seems to urge an adjustment in how the civil community is represented at the GPS table: “The Committee also notes that, while the FAA is the sole contributor to the GPS program from the Department of Transportation, they are not the lead representative for the Department in GPS related issues. If the Department wishes to take the lead and make this a multi-modal approach, funding should be provided by the Office of the Secretary and other modes.”

Neither the House nor the Senate appropriations committees responded to request for comment by press time.

The civil-money shortfall could affect how the government deals with British defense department claims to have a patent on the structure of the new L1C signal — the signal crafted jointly by the U.S. and the European Union to make GPS interoperable with the EU’s Galileo system. One last-ditch option to enable GPS users avoid paying royalties, several sources have told Inside GNSS, is to modify the GPS III satellite plans to avoid using the signal as it is currently designed.

L1C is already incorporated into the GPS III program, said Russo, it is not like you can just strike it out. “There would be a cost impact if you were to change the design at this point.”

Such changes would cost money however, which the civil community would likely be asked to cover.

More critical, however, could be the impact of the shortfall on the overall program.

“The original agreement was for $235 million but so far only $168 million is the [actual money allotted]”, noted a source familiar with the budget. The FAA may step up in future years to make up some of the difference the source noted.

That could be important to keeping the program on track.

“The prior cuts have not caused us a great problem because of the way the program schedule has been,” said Russo. “Things have moved to the right a little bit and so we were able to absorb those basically — [there was] not a significant impact prior to this cut.”

That could change, however, if the shortages are not made up.

“The impact statement for the last cut was that it would be okay if the lost money was restored in FY13,” explained Russo. As things stand the program the program in not only not getting what was lost past year, it is going to be even further behind – and it is unclear what the will mean.

“The Air Force is still assessing the impact from the proposed cuts," said Russo.