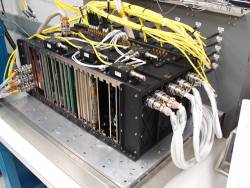 The MDU performs the primary mission of the GPS satellite, which is generation of the navigation signals and data that provide precise time information to users on a continuous basis. Photo: Harris Corp.

“We are now in full production and on target to deliver the fourth GPS III navigation payload to Lockheed Martin this fall,” said Bill Gattle, president, Harris Space and Intelligence Systems. “Our payloads help U.S. and allied soldiers complete their missions, enable billions of dollars in commerce and benefit the everyday lives of millions of people around the world.”

Harris has a long legacy of expertise in creating and sending GPS signals, extending back to the mid-’70s – providing navigation technology for every U.S. GPS satellite ever launched. The company is also developing a fully digital MDU for the U.S. Air Force’s GPS III Space Vehicles 11+ acquisition. This new MDU will be demonstrated in fall 2017 and is designed to provide even greater flexibility, affordability and accuracy versus existing GPS satellites.