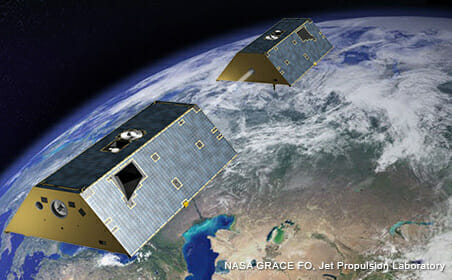 In an article published last week in Science Advances, Surendra Adhikari and Erik Ivins, geophysicists at NASA Jet Propulsion Laboratory (JPL), suggested that melting of the Greenland and Antarctic ice sheets and other climate change–driven phenomena is causing linear drifts and “wobbles” in the Earth’s spin axis, as reflected in the Earth Orientation Parameters (EOP) reported by the International Earth Rotation and Reference Systems Service (IERS), due to shifts in the Earth’s mass.

As ice turns into water and contributes to rising sea levels, the distribution of Earth’s mass moves from continents to the oceans, altering the planet’s gravity field and dynamics of polar motion, the NASA scientists say. The gravity field data was drawn from monthly GRACE data products provided by the Center for Space Research at the University of Texas.

The NASA researchers’ conclusions augmented earlier work by Jianli Chen, a geophysicist at The University of Texas at Austin, who in 2013 attributed the marked change in polar motion to accelerated melting of the Greenland Ice Sheet — a conclusion also based in part on GRACE GPS data.

NASA launched the two identical GRACE satellites on March 17, 2002, which follow one another in orbit at a distance of about 220 kilometers (137 miles). As they circule the Earth, areas of greater concentration of mass produce slightly stronger gravity effects that changes the first satellite’s distance from the following GRACE spacecraft. Onboard Black-Jack GPS receivers developed by NASA provide centimeter-level accuracy of the satellites’ positions while a microwave ranging system measures the changes in intersatellite distances. Acceleromaters located at the mass center of the satellites are used to remove the non-gravitational accelerations from the calculations.

The GRACE data provide a monthly update of the Earth geoid based on these measurements of the gravity field changes, which are several orders of magnitude more precise than those produced by previous gravimetric methods.