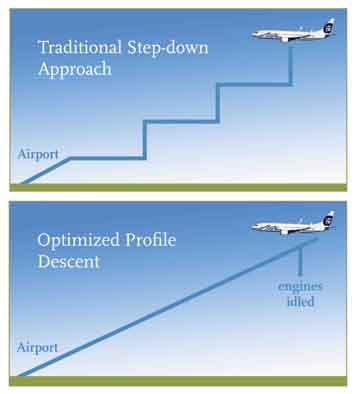 The airline, in cooperation with the Port of Seattle, Boeing and other airlines serving Sea-Tac, is seeking Federal Aviation Administration (FAA) approval for the procedures, which could ultimately be used by all properly equipped carriers at Sea-Tac. Testing for the project began last summer and, since then, Alaska Airlines has flown two other demonstration flights and submitted more than half of the proposed procedures for FAA review.

Representatives from Alaska, Boeing, the FAA and the Port of Seattle participated in the most recent demonstration to observe the level of flight path precision and fuel consumption on eight landing approaches in a Boeing 737-700. With a landing weight similar to that of a typical passenger flight, the shorter and more efficient approaches reduced carbon emissions and saved 400 pounds of fuel per approach, according to Alaska Air.

Alaska Airlines estimates that the new procedures at Sea-Tac will cut fuel consumption by 2.1 million gallons annually and reduce carbon emissions by 22,000 metric tons — the equivalent of taking 4,100 cars off the road every year. RNP will also reduce overflight noise for an estimated 750,000 people living below the affected flight corridor.

“Sea-Tac is the ideal location to pursue this cutting-edge project,” said Ben Minicucci, Alaska’s chief operating officer. “Seattle has the highest percentage of advanced RNP-equipped planes in the nation. . . . Ultimately this project could serve as a blueprint for next-generation aviation technology throughout the country.”

Alaska Airlines says it is the only major U.S. air carrier with a completely RNP-equipped fleet and fully trained crews and is also the first airline approved by the FAA to conduct its own RNP flight validation. Horizon Air’s fleet will be fully RNP-equipped by the end of 2011.

RNP and OPDs are part of the Next Generation Air Transportation System, the FAA’s plan to modernize the National Airspace System through 2025. This initiative will increase airspace capacity and efficiency while improving safety and reducing environmental impacts through the replacement of legacy ground-based equipment with new satellite-based technology and aircraft navigation capabilities.

The FAA accelerated its move toward a Next Generation Air Transportation System (NextGen) earlier this year with contracts awarded to Boeing, General Dynamics, and ITT to demonstrate NextGen procedures in real time on a large scale within the current air traffic system.

Planning and testing of the procedures will continue through the remainder of the year and will be integrated into Alaska Airlines and sister carrier Horizon Air’s commercial operations at Sea-Tac pending FAA approval.