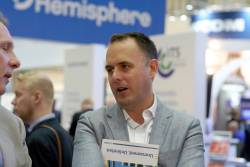 This year’s InterGEO in Hamburg, Germany, featured the latest in geospatial wizardry including new navigation and positioning components and boards not only driving progress in the surveying and mapping industries, but also feeding into the wider GNSS user community.

This year’s InterGEO in Hamburg, Germany, featured the latest in geospatial wizardry including new navigation and positioning components and boards not only driving progress in the surveying and mapping industries, but also feeding into the wider GNSS user community.

"Our market segment is autonomous systems. We are future-hardware capable, we’ve got a dual core onboard to allow deep integration by the customer user, because that’s what our customers want, and it has an IMU and magnetometer on board, and the headline is that this module will cost you just $600," said Rob Hranac, Swift Navigation vice president of business development. "The same way our original Piksi module introduced a new era of precision GPS affordability, the new Piksi Multi represents a revolution in advanced precision GNSS capabilities for the mass market, and we do expect this to be as big a revolution as our first product. Honestly I think this may be most important product at the show. We’re calling it multi for the masses."

Hranac said Swift wants the new Piksi Multi to be a true development platform. "You can run your own filter code, it’s wide open. You can run Linux OS on its second core, you can quickly prototype and adopt your own applications," he said.

Swift decided to unveil the new receiver at InterGEO, but Hranac says the potential applications go beyond the event’s traditional core audience. "Our biggest user segments are autonomous vehicles, UAVs, precision agriculture, robotics, survey and control, as in precision UAV landing, and [research and development] that requires precise navigation and/or positioning," he said.

Everyone’s Going Multi
A few feet away from the Swift booth, the guys from NVS Technologies, with offices in Switzerland and Moscow, were busy pushing their own newly unveiled L1 and L2, multi-frequency and multi-constellation satellite navigation receiver. Compatible with GPS, GLONASS and future global navigation satellite systems Galileo and BeiDou, the NV08C-RTK-M is fully integrated, with embedded RTK functionality.

This new entry is the latest in the NV08C-RTK family, specifically designed for use in high-accuracy applications, featuring low cost, low power consumption and small form factor.

Zoia Baumgartner of NVS in Switzerland said the new board is adaptable to a range of applications, including:

NovAtel RTK ASSIST
Another announcement of note at InterGEO came from NovAtel Inc., with the unveiling of its new RTK ASSIST service, a subscription-based service that provides users with satellite-delivered correction data during RTK correction outages caused by communication disruptions. With the new service, users are able to seamlessly maintain centimeter-level RTK performance for as much as 20 minutes.

"RTK is a well-established method of achieving centimeter-level accuracy with GNSS, but when the RTK correction data link is interrupted, receiver performance does degrade quickly. NovAtel RTK ASSIST subscribers can now maintain the accuracy level of their positioning solution when this kind of interruption occurs, avoiding costly down time," said Neil Gerein, NovAtel portfolio manager.

The new announcement follows hot on the heels of NovAtel’s OEM7 launch at ION GNSS+ in Portland last month. The company’s new positioning engine is open to system integrators, making it easier to match customer application requirements to the best positioning solution.

OEM7 is really a family of GNSS receiver cards, which includes the new OEM7600, the company’s smallest, lightest dual-frequency receiver card. All of the OEM7s have 555 available channels, are multi-constellation and multi-frequency and provide new advanced interference awareness and mitigation capabilities. They all receive satellite-based TerraStar correction signals, making centimeter-level positioning available to everyone.

If it ain’t broke…
The halls of the Hamburg Messe Congress Center are wide and deep, and the InterGEO conference really packs them to the hilt. With so many brands and groups and gadgets and new faces, after a while the event can start to feel a little daunting. A chance to just sit down, relax and talk over old times can suddenly feel like a thing of beauty.

And that’s what happened when we caught up with our old friend, Sensonor’s Hans-Richard Petersen, whose flagship product, the STIM300 Inertial Measurement Unit, made in Norway, has got to be one of the all-time MEMS-based navigation success stories.

"Before 2009, there was no such product in the market," Petersen said. "To do what the STIM300 does, you needed a fiber-optic gyro, which is very expensive. Or, on the other side, you had the low-end products that just didn’t do the job. So we filled in that gap. People come up to us now and say this is a good part, but it was challenging to get to where we are, because at the beginning we were a kind of no-name in this industry and we kind of had to build this market. Most people, when they start using a part, they do not trust in the specifications, but with us they came back later and said, ‘well this is really, really doing the job, you are the only MEMS IMU that delivers what you say you are going to deliver.’"

Today, NovAtel uses the STIM300, and NASA uses it, and the biggest mapping and Self Driving Car (SDC) players in the world, and various missile projects use it. Petersen is particularly proud of the way his STIM300 has been embraced by the space sector. "It was the American Aerospace Corporation that first started using the STIM300 in trials," he said. "Then NASA got involved and they wrote some pretty positive recommendations, then more and more satellite companies followed. We are providing many parts to major international satellite builders like Surrey Satellite Systems in the UK using them for their satellites and there are some other very interesting space-related projects now using this part."

It tickles Petersen to say: "All of these groups are using the identical part taken from our production line, the same part that we sell to everyone else, and they pay the same price as everyone else too."

When the European Space Agency (ESA) came to Sensonor and asked them to ‘space-qualify’ the STIM300, Petersen said he thought it might be a good idea. "It was lots of paperwork," he said. "So many verifications, listing parts, batches, sources and such, it was really a lot of trouble, but we did it, and ESA was happy. Then NASA came to us and asked if we could do the same thing for them and we said no, we would not do it. But we said they could still buy the part anyway, so they came back to us and they bought it anyway."

Petersen said Sensonor has the STIM300 installed and working on satellites that have been in space for years, and it has never failed. "If you look around, our only real competitors are Honeywell, Northrup Grumman, Sachem…those guys," Petersen said. "What we have in common with them is that we all have our own manufacturing facilities. Silicon fabrication, which no one else can do, it is cost prohibitive, a barrier to entry. And, very important, we are outside the ITAR restrictions and we have taken special care not to have any American-made contents in our product."

Petersen said Sensonor’s key message in Hamburg was that it still offers the highest-performing IMU in the smallest weight/size/cost package, and the company will continue to do what it does.

Sensonor has started working on a next-generation product. Largely based on feedback and customer requests, the changes will be mostly incremental.

"There will be some new electronics," Petersen said. "We will have the same sensing principle, and we think we can get close to doubling some of the performance parameters, moving even closer to the kind of performance you see in the fiber-optic segment.

No changes necessary
SBG Systems, based in Rueil-Malmaison, near Paris, was at InterGEO this year to brag about its Ellipse series of miniature high-performance inertial sensors, even though their most recent model, the Ellipse-D, has been out for more than a year.

SBG Marketing and Communications Manager Helene Leplomb said, "The Ellipse-D is still news this year because so far, in terms of specs, no one has produced anything that compares to it."

It is slightly bigger than the other models in the Ellipse series because it incorporates a survey-grade L1/L2 GNSS receiver with dual antennas for heading, altitude, and location accuracy.