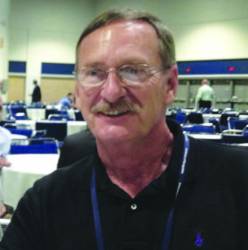 About the same time, governmental agencies were reporting widespread cases of land subsidence in California’s central San Joaquin Valley caused by overpumping of water from wells there.

About the same time, governmental agencies were reporting widespread cases of land subsidence in California’s central San Joaquin Valley caused by overpumping of water from wells there.

According to the Scripps researchers, the largest uplift of the tectonic plate — that piece of the Earth’s crust on which the western states rest — amounted to only 15 millimeters (about half an inch) in California’s mountains and an average of four millimeters (0.15 of an inch) across the West.

How did they do it? How did they detect so precisely such a small movement over thousands of square miles of terrain?

From analysis of massive sets of data accumulated over the past 11 years from high-precision GNSS monitoring stations scattered across the region. Indeed, GNSS technology has created a figurative common ground where space science meets Earth science, which in its larger scope encompasses the field of geodesy: the measuring and monitoring of the size and shape of our planet.

Finding out how that has come about led us to Gerald Mader, chief of the Geosciences Research Division of the National Geodetic Survey (NGS), an office of the U.S. National Oceanic and Atmospheric Administration (NOAA). Mader joined the NGS in 1983 and has seen GNSS grow from an obscure military program into, among other things, a crucial tool for modern geodesy.

Mader is a coauthor of the original RINEX format, a cofounder of the International GNSS Service, and the developer of NGS’ antenna calibration program. He has also written and supervised NGS’s GPS software for precise static and kinematic positioning.

NGS is the oldest scientific agency in the nation, descended from the Survey of the Coast, founded in 1807 by President Jefferson. Through both research and development, NGS focuses on defining and delivering to the public the National Spatial Reference System (NSRS). A good example of its activities is OPUS, NGS’s Online Positioning User Service, now referred to as OPUS-S. Mader promoted development of this web-based service that provides users submitting GPS static positioning data with NSRS coordinates accurate to a few centimeters with which to improve their positions.

A few years ago, he launched the Kinematic GPS Challenge, an effort to attract volunteers to help NGS facilitate development of its GPS processing method for GRAV-D (Gravity for the Redefinition of the American Vertical Datum). Interested researchers and companies from around the world were invited to compute and submit position solutions from samples of actual GRAV-D data.

High-precision GNSS accuracy has made possible, or greatly enhanced, a variety of remote sensing applications, including photogrammetry, LIDAR mapping, synthetic aperture radar, and airborne gravity. Road grading, precision agriculture, and monitoring the stability of buildings, bridges, and dams are part of a very long list of applications facilitated by GNSS.

“Just about any type of platform that moves, whether on the surface of the earth, in air or in orbit, has had GNSS attached to it to precisely measure its motion,” says Mader.

IGM: What do you believe has been the single most significant effect that GNSS has had on the field of geodesy?

MADER: The overwhelming benefit of GNSS to geodesy is the accuracy and the time required to achieve that accuracy. The older optical techniques required line-of-sight and traversing, sometimes over long distances, over mountains, across rivers, etc., to position a new mark with respect to a known mark. Now, geodetic control is transferred from a global network of marks (the International GNSS Service network) through the GNSS satellites to any other mark on the Earth that needs to be positioned.

IGM: How has GNSS technology affected, if not transformed, the work of geodetic survey agencies?

MADER: The impact of GNSS on surveying is revolutionary and comparable only to the impact of the computer itself. Labor-intensive surveys requiring days or weeks can now be done in hours. State-wide, real-time networks provide centimeter-level accuracies in seconds to minutes. While GNSS is not appropriate for every survey, just about every survey will use GNSS to connect to local geodetic control. Survey agencies are defining and maintaining the infrastructure needed to support this GNSS surveying and provide some continuity to the legacy surveys they have archived.

IGM: How has GNSS contributed to the definition of the International Terrestrial Reference Frame (ITRF)?

MADER: Given the number of GNSS tracking stations compared to Very Long Baseline Interferometry (VLBI), Satellite Laser Ranging (SLR) and Doppler Orbitography and Radiopositioning Integrated by Satellite (DORIS), GNSS has certainly become the dominant contributor to the ITRF. While the techniques contributing to the ITRF offer comparable accuracies, there are small biases which are still being studied.

Perhaps ironically, the traditional optical techniques are needed and being used to precisely find the vectors connecting these techniques where combinations of these techniques are co-located at the same site. There are multiple IGS GNSS tracking stations on every continent and just about any remote island that may provide additional coverage. These precisely determined reference stations provide the means to conveniently and accurately connect local and national datums to this global reference frame.

IGM: How much have GNSS techniques improved the accuracy of horizontal and vertical datums? Have they produced a truly unified three-dimensional capability?

MADER: The improvement to the accuracy of datums has been enormous as you might imagine given the high accuracy and efficiency of GNSS techniques. The continuously operating reference stations (CORS) may typically show horizontal repeatability of 3-5 millimeters and vertical repeatability of 6-9 millimeters. Of course, this vertical is, strictly speaking, distance from the geocenter (since GNSS uses Cartesian coordinates) and is usually expressed as a height with respect to an ellipsoid that approximates the oblate shape of the Earth in order to get more reasonable numbers.

This ellipsoid height, however, is not the height required for mapping and engineering. That is the orthometric height which follows an equipotential surface and is often colloquially, but incorrectly, referred to as mean sea level.

The two height systems are related by the geoid, which can be determined from measurements of gravity. NGS is currently working on a project (GRAV-D) using terrestrial, airborne, and satellite gravity data to improve the geoid so that more accurate orthometric heights can be derived from GNSS determined ellipsoid heights.

IGM: Has GNSS enabled modern geodesy to expand from the realm of scientific endeavor to a more service-oriented discipline, such as can be found, for example, in the NGS’s Online Positioning User Service (OPUS)?

MADER: GNSS data processing software is now capable of sub-centimeter accuracies between stations thousands of kilometers apart and estimating satellite positions to within a few centimeters. Yet these highly complex programs can be made accessible to the public through a simple web-based interface as NGS has done with OPUS.

This allows long term tracking of stability and motion by users to be based on uniform and consistent physical models and parameterization. For example, subsidence from ground fluid extraction can be monitored with the best possible accuracy by periodically submitting RINEX files to OPUS. There are now thousands of geodetic quality GNSS receivers in use every day in the United States. Providing the capability to easily and accurately process a portion of these data and share results is an important and increasingly popular service.