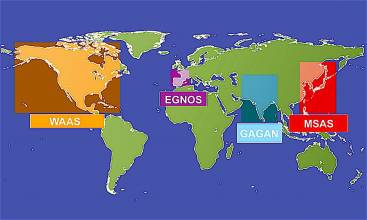 Earlier this week, Geoscience Australia, an agency of the Commonwealth of Australia, and Lockheed Martin announced they had entered into a collaborative research project to show how augmenting signals from multiple GNSS constellations can enhance positioning, navigation, and timing for a range of applications. GNSS signals are critical tools for industries requiring exact precision and high confidence, and this new testbed will demonstrate enhanced navigation performance for nine critical industrial sectors in Australia.

Then on Friday came news that The Australian Government will be collaborating with New Zealand on the project to improve positioning capability in the Australasia region.

The two countries will work together to test instant, accurate and reliable positioning technology that could provide future safety, productivity, efficiency and environmental benefits across many industries in the region, including transport, agriculture, construction, and resource management.

Federal Minister for Infrastructure and Transport Darren Chester said he welcomed New Zealand contributing an additional $2 million to the $12 million in project funding announced by the Australian Government in January 2017.

“The two-year project will test SBAS technology that has the potential to improve positioning accuracy in the region to less than five centimeters. Currently, positioning in Australasia is usually accurate to five to 10 meters,” Chester said. “Not only do we use positioning technology every day through apps like Google Maps, but it is essential to all four transport sectors — aviation, maritime, rail, and road.

“Improving positioning technology has the potential to open up a whole range of new opportunities for transport sectors, including building on technological developments in maritime navigation and automated train management systems to a future that includes driverless and connected cars.”

Minister for Resources and Northern Australia Matt Canavan said research had shown that the wide-spread adoption of improved positioning technology has the potential to generate upwards of $73 billion of value to Australia by 2030.

“This technology has potential uses in a range of sectors, including agriculture and mining, which have always played an important role in our economy, and will also be at the heart of future growth in Northern Australia,” Senator Canavan said.

Earlier this month, technology companies GMV, Inmarsat, and Lockheed Martin joined the project. The companies have been involved in implementing SBAS technology around the world, and will be involved in the technical components of the testbed.

This innovative research project aims to demonstrate how a second-generation SBAS testbed can – for the first time – use signals from both the GPS and the Galileo constellations, and dual frequencies, to achieve even greater GNSS integrity and accuracy. Over two years, the testbed will validate applications in nine industry sectors: agriculture, aviation, construction, maritime, mining, rail, road, spatial, and utilities.

Ultimately, the second-generation SBAS testbed will broaden understanding of how this technology can benefit safety, productivity, efficiency and innovation in Australia’s industrial and research sectors.

"We are excited to have an opportunity to work with Geoscience Australia and Australian industry to demonstrate the best possible GNSS performance and are proud that Australia will be leading the way to enhance space-based navigation and industry safety," Di Pietro added.

Basic GNSS signals are accurate enough for many civil positioning, navigation and timing users. However, these signals require augmentation to meet higher safety-of-life navigation requirements. The second-generation SBAS will mitigate that issue.

Once the SBAS testbed is operational, basic GNSS signals will be monitored by widely-distributed reference stations operated by Geoscience Australia. An SBAS testbed master station, installed by teammate GMV-Spain, will collect that reference station data, compute corrections and integrity bounds for each GNSS satellite signal, and generate augmentation messages.

By augmenting signals from multiple GNSS constellations – both Galileo and GPS – second-generation SBAS is not dependent on just one GNSS. It will also use signals on two frequencies – the L1 and L5 GPS signals, and their companion E1 and E5a Galileo signals – to provide integrity data and enhanced accuracy for industries that need it the most.

“The testbed that we are implementing along with our partners is in our view the first step in evaluating the feasibility of moving toward a globally integrated SBAS that fully leverages the capabilities of L1, L5, E1 E5a, and in addition leverages the introduction of a second GNSS constellation, Galileo,” Jackson said.

“We’re leveraging dual frequencies and multiple constellations and we want to be able to offer that capability along a wide geographic range as well as an expanded set of end users. It’s not just aviation, although aviation is a significant component of it. We’re also looking very closely at applications for positive train control, maritime, intelligent transportation, mining and more. We see that capability ultimately being something that can be offered globally.”

Lockheed Martin will provide systems integration expertise in addition to the Uralla radio frequency uplink. GMV-Spain will provide their “magicGNSS” processors. Inmarsat will provide the navigation payload hosted on the 4F1 geostationary satellite. The Australia and New Zealand Cooperative Research Centre for Spatial Information will coordinate the demonstrator projects that test the SBAS infrastructure.

Jackson says second-generation SBAS technology will provide higher performance with high confidence, especially in the equatorial region that suffers from a very dynamic ionosphere. On top of that, using dual frequencies will require fewer reference stations.

“The introduction of L5 does two things. One it improves performance substantially for the more demanding applications in the equatorially region, and two, it significantly simplifies the SBAS architecture,” Jackson said. “We’re pleased that we found a partner in Australia that also is interested in the full range of capabilities that the technology offers. Plus, the introduction of Galileo is a very positive thing for the entire GNSS industry.”