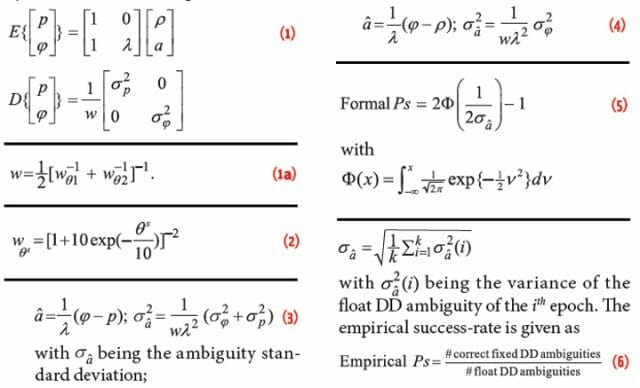 In February 2011, Russia launched the first satellite of the GLONASS-K1 series, i.e., SVN (space vehicle number) 801 (R26), which in addition to the legacy frequency division multiple access (FDMA) signals, for the first time was enabled to transmit code division multiple access (CDMA) signals on the GLONASS L3 frequency (1202.025 MHz). Later in 2014, the GLONASS program added SVNs 802 (R17) of series K1 and 755 (R21) of series M, and in 2016, SVN 751 of series M, with the capability of transmitting CDMA L3 signals to the constellation.

In February 2011, Russia launched the first satellite of the GLONASS-K1 series, i.e., SVN (space vehicle number) 801 (R26), which in addition to the legacy frequency division multiple access (FDMA) signals, for the first time was enabled to transmit code division multiple access (CDMA) signals on the GLONASS L3 frequency (1202.025 MHz). Later in 2014, the GLONASS program added SVNs 802 (R17) of series K1 and 755 (R21) of series M, and in 2016, SVN 751 of series M, with the capability of transmitting CDMA L3 signals to the constellation.

The GLONASS FDMA double-differenced (DD) ambiguity resolution is known to be hampered by the inherent inter-frequency biases. Several calibration procedures have been proposed to deal with this impediment. With GLONASS-CDMA however, the standard methods of integer ambiguity resolution can be applied to resolve the integer DD ambiguities. The goal of this article is to provide a first assessment of this L3 ambiguity resolution performance.

Measurement Setup
Our analysis is based on the GLONASS L3 data of the satellite pair R21-R26, collected by two multi-frequency GPS/GLONASS receivers on an eight-meter baseline at Curtin University, Perth, Australia (Figure 1). We also compare these results with their GPS L5 counterparts for the satellite pair G10-G26. The rationale behind making this comparison is that both these modern signals have close frequencies (see Table 1) and the same BPSK(10) modulation.

Figure 2 shows their observed carrier-to-noise densities (C/N0).As their C/N0 graphs show a similar signature, their signals are expected to have similar noise characteristics. Figure 1 also shows the skyplot of the mentioned satellite pairs at Perth. For both the GLONASS and the GPS satellites, we used the broadcast ephemeris data. Table 2 provides further information on the data-set that we used.

Model of Observations
Because our analysis is based on satellite pairs, we first formulate the two-satellite observational model. With the expectation E{.} and dispersion D{.}, the corresponding double-differenced (DD) system of observation equations reads

in which p and φ are the DD code and phase observable, respectively, ρ the DD receiver-satellite range and a the DD integer ambiguity in cycles. The ambiguity a is linked to the DD phase observable through the signal wavelength λ. With the elevation-dependent weighting function wθs (s = 1, 2) for the sth satellite with elevation angle θs, respectively, the final weight becomes

Here wθs is taken as

where θs is in degrees. The zenith-referenced standard deviations of the undifferenced code and phase observables are denoted as σp and σφ. In our analysis we considered two different models. These are arranged in ascending order of strength as:

1. Geometry-free model (GFr): This is the model as formulated in (1). As it is parametrized in ρ, it is free from the receiver-satellite geometry. The single-epoch DD ambiguity is then estimated as

2. Geometry-fixed model (GFi): In this model, the information on receiver position, from e.g. surveying, and satellite position, from navigation file, is available and thus ρ is assumed known. The single-epoch DD ambiguity is then estimated as

Note that although the observations of only two satellites are used, both the geometry-free and geometry-fixed models are instantaneously solvable, i.e., based on data of only a single epoch. See the article by P. J. G. Teunissen (1997) listed in the Additional Resources section near the end of this article for a more detailed discussion of these models.

Ambiguity Resolution
The data used for our L3 and L5 ambiguity resolution performance analysis were one hertz sampled on DOY 21 of 2016 over the time period UTC [07:16:59-09:13:38]. As the observations of a satellite pair and a receiver pair result in only one unknown DD ambiguity, simple integer rounding can be used for integer ambiguity resolution. We denote the float ambiguity by â, the fixed (integer rounded) ambiguity by ă, and the reference ambiguity by a. The reference DD ambiguity a is computed based on the multi-epoch solution of the geometry-fixed model.

In Figure 3, the time series of â − a and ă − a are shown for the receiver pair CUT3-CUCC, for both the GLONASS satellite pair R21-R26 (left column) and the GPS satellite pair G10-G26 (right column).

For the computation of the formal success-rate, the ambiguity standard deviation was taken as the square-root of an average of the formal variances, i.e., as

To further confirm the consistency between the data and models, we compare, for both the geometry-free and the geometry-fixed model, the formal PDF with the histogram of the estimated DD ambiguity. Normalizing the estimated DD ambiguity by means of the elevation weighting function results in a new quantity, i.e., √ w (â – a) which, assuming the data to be normally distributed, has a central normal distribution with the standard deviation of √ w σâ. Depending on whether the underlying model is geometry-free or geometry-fixed, the value of √ w σâ can be obtained from (3) or (4), respectively.

Figure 4 displays the histograms of the normalized DD ambiguity √ w (â – a), for geometry-free and geometry-fixed model. The corresponding formal distribution is also shown by the red curve. It demonstrates the consistency between the empirical and formal distributions.

For our analyses, we made use of the GLONASS L3 signal transmitted by the satellite pair R21-R26 and of the GPS L5 signal from the satellite pair G10-G26. The carrier-to-noise densities of both signals were shown to have similar signatures.

Our empirical results (in the form of success-rates and normalized ambiguity PDF) showed a good agreement with their formal counterparts, thereby showing the consistency between data and models. The ambiguity resolution of GPS L5 was better than that of the GLONASS L3, which was attributed to the higher elevation of the GPS satellites w.r.t the GLONASS satellites during the considered period.