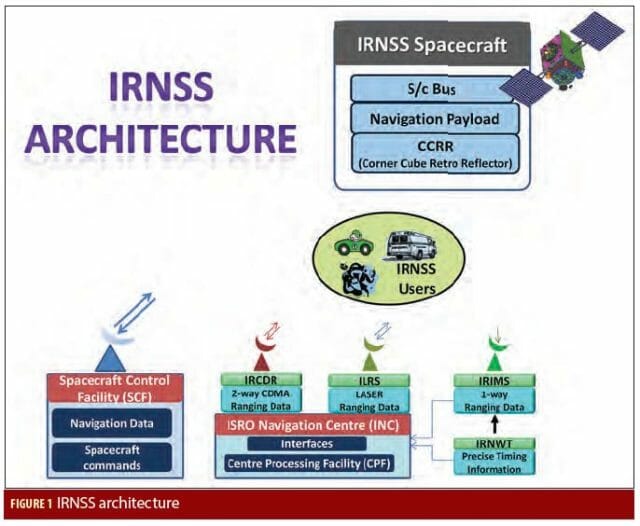 The primary objective of IRNSS is to achieve position accuracy of 20 meters (2σ) for dual-frequency users over India and the primary service area (a region extending to about 1,500 kilometers or 930 miles).

The primary objective of IRNSS is to achieve position accuracy of 20 meters (2σ) for dual-frequency users over India and the primary service area (a region extending to about 1,500 kilometers or 930 miles).

The first IRNSS satellite was launched on July 1, 2013, the second on April 4, 2014, and the third on October 16, 2014. Following these launches, the fourth IRNSS satellite, IRNSS-1D, was successfully placed in orbit on March 28 of this year.

After the completion of in-orbit tests and initial experiments, the satellite was declared operational on May 18, 2015, and began transmitting signals along with the other three satellites (IRNSS-1A, -1B, and -1C). Out of these four satellites, IRNSS-1C is a GEO; the other three are GSOs.

The satellites are basically configured around ISRO’s I-1K spacecraft bus and carry navigation payloads that transmit on L5 (1164.45–1188.45 MHz) and S (2483.5–2500 MHz) bands. In addition to a highly accurate rubidium atomic clock and other bus systems, the payload includes a CDMA transponder for two-way ranging to facilitate accurate orbit determination as well as a corner cube retroreflector that enables laser ranging.

The IRNSS Signal-in-Space Interface Control Document (ICD) for the SPS is already hosted online in the public domain and provides the technical details about the SPS signal, data structure, and user algorithms.

Navigation Service through IRNSS
IRNSS PVT is provided through the satellites’ broadcast of primary and secondary navigation parameters in four sub-frames. The CPF residing at the INC is responsible for monitoring, generating, and uploading navigation data to the IRNSS satellites.

IRNSS has adopted a new, unique hybrid data structure with four subframes in its navigation messages. This data structure blends fixed format (Subframes 1 and 2 with the primary parameters — clock terms, time, and ephemeris required for a position fix) and flexible format messages (Subframes 3 and 4 with the secondary parameters: ionospheric grid parameters, text messages, differential corrections, and so forth).

The satellite position is transmitted in terms of quasi-Keplerian elements and clock data in terms of polynomial coefficients. An alert flag, broadcast in bit number 26 of Subframes 1 and 2, indicates whether the satellite can be used for position computation. The IRNSS network time facility provides precise time information for orbit determination and clock offset computation and accurate timing service to user. The IRNWT is maintained within 50 nanoseconds with regard to Coordinated Universal Time (UTC). IRNWT-UTC offsets are provided in Subframes 3 and 4 within an uncertainty of 20 nanoseconds (2σ).

IRNSS Central Processing Facility
The primary objective of the CPF is to compute the primary and secondary navigation parameters, initialization of onboard time (clock), and monitoring of the onboard clock performance. The CPF also monitors the broadcast parameters in the range domain (in terms of user equivalent range error or UERE) and position domain (through user position computation at the reference stations).

Interfaces and Architecture. The time reference for the orbit and clock estimation process (OCEP) is provided by the precise timing facility (IRNWT). It also provides the IRNSS time offsets in relation to UTC and other GNSS system times. These offsets are generated as a part of secondary navigation parameters by the CPF. Figure 2 shows the major interfaces and architecture of the IRNSS Central Processing Facility.

Orbit and Clock Estimation. The orbits and clocks of the IRNSS satellites are precisely estimated though the high-quality measurements available from the IRIMS network of one-way ranging stations. These measurements are processed for detection of outliers, cycle slips, ambiguity fixing, and removal of atmospheric error prior to orbit and clock estimation.

The OCEP employs a “Master Clock” concept, wherein one of the IRIMS is driven by the IRNWT, which serves as the reference time for the orbit and clock determination. To strengthen the stability of the orbital arc, three-day measurements are processed through a batch filter to estimate the orbit and clock parameters.

The ionospheric corrections are broadcasted every five minutes at predefined points that form a virtual five-by-five–degree grid over the Indian region at 350 kilometers above the Earth surface. Moreover, as defined in the IRNSS SIS-ICD, an ionosphere error correction for single-frequency L5 users in the whole IRNSS service area is broadcasted through a set of eight coefficients (similar to the Klobuchar coefficients of GPS), which are valid over a day.

Figure 4 and Figure 5 shows the total electron count (TEC) for a typical lines-of-sight on L5 over the course of a day. Here, the grid-based and coefficient-based models are compared with TEC derived from dual-frequency measurements.

Demonstration of Position Fix
IRNSS position accuracies derived from broadcast navigation parameters are continuously monitored using the receivers deployed across India. The position accuracy with the current four in-orbit satellites degrades for a short duration (twice a day), due to the satellite geometry with respect to the user (poor dilution of precision or DOP “hole”). Figure 6 shows an instance with good geometry where position accuracy of less than 10 meters was achieved.

Figure 7 provides the position accuracy over the course of a day for receivers located at Bangalore (Figure 7a) and Bhopal (figure (7b) with respect to the known precise station co-coordinates with fours parameter (user receiver position and clock). On the other hand, three-parameter estimation, with receiver clock fixed, shows consistent accuracy throughout the day. The DOP hole will be mitigated after the launch of the fifth IRNSS Satellite and the position accuracy of less than 20 meters with dual-frequency receivers over India for 24 hours will be realized from then on.

With the four satellites currently in orbit, by taking advantage of the grid-based or the coefficient-based ionospheric corrections, single-frequency users (on L5/S) can obtain positioning accuracy similar to that possible with dual-frequency receivers.

Figure 8 and Figure 9 show the RSS position errors for single-frequency L5 and S-band receivers compared with dual-frequency receivers using, respectively, grid-based and coefficient-based ionospheric corrections. Single-frequency accuracies are expected to improve further with additional satellites in the constellation and additional IRIMS stations on the ground.

Conclusion
For the first time ever, the IRNSS proof of concept has been demonstrated as of April 30, 2015. IRNSS receivers across India have achieved position solutions relying only on IRNSS signals from four satellites (1A, 1B, 1C, and 1D). After the initial phase of operations, the alert flag for IRNSS-1D was reset on May 18, 2015, indicating that the satellite can be used for position fix along with the other three in orbit.

This achievement is a historic and significant milestone towards offering initial satellite navigation services from IRNSS demonstrating the position accuracy of better than 15 meters, 18 hours a day over India, as expected.

Acknowledgments
This article is made possible through the support and contributions from the members of the Space Navigation Group, ISRO Satellite Center. We also would like to acknowledge the scientists from the Satellite Navigation Program, Space Application Center, ISRO Telemetry Tracking and Tele-command Network, Space Segment team and Master Control Facility for their contributions in realizing the system.