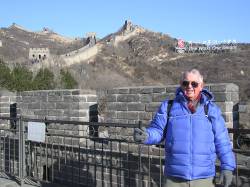 I have always wanted to go to certain places in China that weren’t on any standard tour. These included such sites as the Ancient Observatory in Beijing, Qianling Park in Guiyang, the Maritime Museum in Shanghai, and the walkway around Victoria Peak in Hong Kong.

Recently, on my first trip to and through China —21,889 miles in all, I used a GPS receiver to find my way through Beijing, Guiyang, Shanghai, and Hong Kong. As a navigator for the past 50 years, I always try to have an alternative means of knowing where I am and where I want to go.

I have always wanted to go to certain places in China that weren’t on any standard tour. These included such sites as the Ancient Observatory in Beijing, Qianling Park in Guiyang, the Maritime Museum in Shanghai, and the walkway around Victoria Peak in Hong Kong.

Recently, on my first trip to and through China —21,889 miles in all, I used a GPS receiver to find my way through Beijing, Guiyang, Shanghai, and Hong Kong. As a navigator for the past 50 years, I always try to have an alternative means of knowing where I am and where I want to go.

Using Google Earth, I undertook some pre-trip planning, viewing pictures that are available on the Internet to do a virtual tour before ever leaving the good old U.S. of A. With Google maps, I located the latitude and longitude of all of the tour sites my wife and I planned to visit and the position of each of the four hotels and airports that we would be using. I inserted most of the position data into my Garmin etrek Vista receiver before I left home.
I also own a Garmin NUVI 660 that I use in my automobiles and RV, but I took the etrek Vista with me because it looks like a cell phone and is less intrusive in crowds.

As a backup to the information in my GPS receiver, I printed a picture of the Google Earth map area around each of locale of interest and downloaded other maps off the Internet, especially public transportation maps.

Off the Map
In recent years, I have used a GPS receiver to navigate in England, Wales, Italy, Spain, Portugal, the Danube River area, and Greece where street-level map data is available. Unfortunately, I could find no detailed map databases of China that are compatible with my receiver. The China map on my Garmin CD, for example, includes only the main roads in the larger cities. I compensated for the lack of street level detail by establishing a grid of sites of interest on the Garmin display for the four cities.

Mobile phones are a familiar sight in the hands of many Chinese. So, my GPS receiver and I faded into the background because, except for my facial features, I looked like any other person with a cell phone.

Initializing my GPS receiver in my first stop of Beijing was no problem. I used the menu for initialization to the world map and vectored to Beijing as a new location from my home in Maryland. In about two minutes, I was ready to navigate. The receiver took about a minute to restart in the other three cities.

On our first afternoon in Beijing, my wife, Carolyn, and I hopped on the blue line of the subway near the Swissotel where we were staying. We traveled four stops south to a transfer station and then went two subway stops west on the red line to the beginning of a walking street that I had noted in tour literature. (Beijing’s subway system is very easy to use despite what tour guides tell you.)

We got off near Wangfujing, a rather upscale walking street with stores and restaurants and many Chinese shoppers. Using GPS, we conducted a circle tour that took us through the Dongchang hutong area of ancient alleys and narrow lanes with one-story homes. As we meandered through the mostly residential area, I used the GPS position of the hotel as a reference.

We were probably the first “tourists” to see this hutong from the ground level. As the Chinese people achieve a better standard of living, hutongs are rapidly being torn down and replaced with skyscrapers. A few years from now, they will only be retained as tourist attractions.

My next destination was to find the Ancient Observatory that was built around 1410 during the Ming Dynasty. The Observatory was in continuous use until 1922. Halley’s Comet was first detected at this venerable observatory.

Leaving the hotel and traveling south again, I exited the subway at a major road intersection. However, I could see no nearby building and no sign of the observatory. I turned on the GPS and in less than two minutes saw my position on the map display and inserted a “go to” command relative to the observatory location I had stored at home before the trip.

The GPS receiver has a built-in compass and, as I aligned the display with north, it indicated that the observatory was only 454 feet to the northeast. Following these directions, I crossed under the major Second Ring Road and saw the observatory building. This is another example of navigation and stress reduction in a strange land.

Shortcuts to Heaven
After visiting the observatory and its informative museum, I noted that TianAnMen (Gate of Heavenly Peace) Square and the Forbidden City were only four subway stops to the east. To conserve time, I used the subway to get there. Upon leaving the subway and turning on the GPS, I again orientated my location relative to the Forbidden City, the National Museum, and the Great Hall of the People.

The square is the largest open area in any city in the world. Once you know where you are, you know how to get where you want to go. No problem!! I returned to the Forbidden City several days later with the organized tour.

The third use of GPS in Beijing occurred during a tour with a local guide at the Temple of Heaven, a few miles south of the Forbidden City. This complex is several miles square and has a north-south axis.

As we entered the area, a number of police and soldiers were shooing visitors away. Our guide told us a VIP was also visiting that day. I had previously saved the location of the major temple in the complex, using Google Earth. I showed the guide where we were on my GPS receiver map display relative to where he wanted to take us, which was about a half mile away.

Could we get around the VIP incursion by going cross-country through the mature woods where the Chinese were exercising? Our guide had never deviated from the normal tour route, but he said, “Let’s try.” Our group of four got to the temple before the official entourage and saw much more of the complex. GPS saved the day for us!

GPS Height at Great Wall
My next use of the GPS on this trip was on our two-hour hike on the Great Wall. On this excursion we used the altimeter function of the GPS to determine how high we climbed up the ridge on the top of the Great Wall.

Starting from the Badaling or Juyongguan Pass at 2,150 feet above sea level, about 490 feet was all we could manage while observing the surrounding grandeur on this blue-sky crisp temperature day. We were only 32 miles from our hotel, as the crow flies, and a thousand years away from the reason for the expenditure of so much human effort.

About 1,077 miles south of Beijing is the city of Guiyang. This was the second city on our tour and the city reminded us of Pittsburgh, nestled in this hilly country. I used my GPS on day excursions with a guided tour to an ancient village located south of Guiyang.

Primarily I employed the GPS receiver for orientation here. However, I showed some of the village children and even the mayor of the village how far they were from Guiyang and Beijing. I found the villagers to be knowledgeable about GPS, but this was the first receiver they had ever seen. Apparently, you do not need GPS to steer a water buffalo!

Sea Exploration before GPS
Shanghai, another stop on our tour, is a magnificent city is on the Huangpu River, which flows into the Yangtze River and is about 60 miles from the Pacific Ocean. It takes about two hours to drive all the way across the city without traffic.

One of my objectives in Shanghai, besides walking down glittering Nanjing Street, the famous shopping boulevard, was to visit the C.Y. Tung Maritime Museum on the campus of Shanghai Jiao Tong University. After my tour guide dropped me off at the entrance to this large campus, I turned on my GPS and entered a “go to” for the location of the museum. I was only about 900 feet away and walked directly to the building without getting lost among all of the students.

The museum has a history gallery with ship models on the first floor. In particular, the gallery contains displays of the seven ocean voyages of the Ming Dynasty admiral, Zheng He. One end of the gallery is dominated by a large model of a 400-foot long ship with six masts and a crew of 1,000 men and women.
An unusual feature of the ship design was the port and starboard masts that augmented the other four-centerline masts. The off center masts were apparently used to augment the rudder for steerage for such a large vessel.

After leaving the Maritime Museum, I backtracked my way out of the campus to Hua Shan Road. I had the previously saved the coordinates for the closest red line subway station (Xujiahui) in the GPS. The “go to” function indicated the direction, and I walked a few blocks and saw the subway signs. Five stops later, I was back at the hotel on Nanjing Road.

The last city to visit on this trip was Hong Kong. Our major use of the GPS was on our one and a half hour circumnavigation of Victoria Peak for which I had previously loaded the position of the top of the peak tram station.

GPS greatly enhanced my first trip to China – made it easier in some cases and possible in others. Because of the wide streets in all of the cities and parks, I encountered little of the “urban canyon” effect that blocks satellite signals and prevents the receiver from establishing a position fix.

In China, I was not navigating in the dark and there were plenty of Chinese to bump into. In addition to trip planning with the Internet and Google Earth, all we needed for a successful tour was common sense and courtesy.