Bring Real-World GNSS Satellite Signals Back to the Lab . . . with More Detail Than Ever - Inside GNSS - Global Navigation Satellite Systems Engineering, Policy, and Design 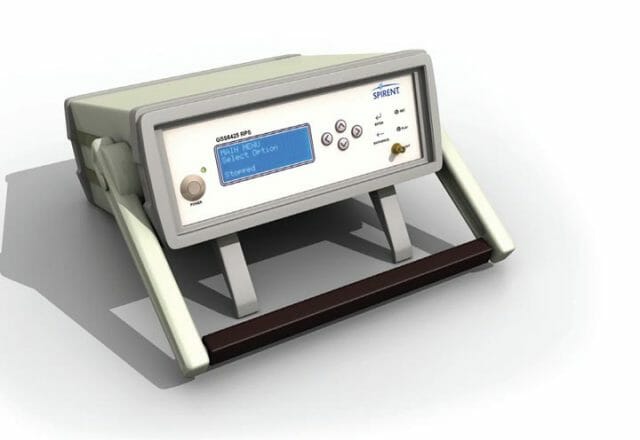 Spirent Communications has unveiled a new system for recording real-world GNSS RF signals and replaying them in the lab.

“Record and Replay” is popular as a more rigorous — and, crucially, repeatable — approach to GPS and GNSS testing than using live signals in real time, where satellite positions and atmospheric conditions are constantly changing.

Spirent Communications has unveiled a new system for recording real-world GNSS RF signals and replaying them in the lab.

“Record and Replay” is popular as a more rigorous — and, crucially, repeatable — approach to GPS and GNSS testing than using live signals in real time, where satellite positions and atmospheric conditions are constantly changing.

Recording the satellite signal environment once, and then replaying it back in the laboratory multiple times, allows algorithms and software to be tested quickly and efficiently while at the same time significantly reducing the total cost of field trials.

Housed in a rugged, field portable case with internal an battery lasting more than 1.5 hours makes GSS6425 the only truly portable multi-frequency GNSS record and replay system around. With built-in Linux based PC and internal OCXO, no cabling is required (apart from the antenna connection) making it easy to walk around with and capture signals anywhere.

Let’s look briefly at some of the potential applications for the record and playback system.

Chipset Testing for BeiDou-2 B1 and GPS, GLONASS, Galileo. Consumer-focused chipset manufacturers that must accommodate BeiDou alongside GPS and GLONASS L1 frequencies are adopting the GSS6425, as it offers all the versatility and performance to develop tomorrow’s devices without investing in a military or survey-grade system.  Field testing time is reduced and the ability to play back the recorded scenarios using scripts allows automated testing to take place 24/7.

Survey-Grade Receiver Verification. The GSS6425 offers the power and flexibility to cover the most demanding, survey-grade applications. One leading survey grade receiver manufacturer is using the master-and-slave capability to synchronously capture GPS L1, L2, and L5 signals on one unit, and GLONASS L1 and L2 on another, along with a proprietary, Inmarsat augmentation signal.

The resulting six channels of concurrent signal data are used to give repeatable, real-world parameters for product verification and validation testing, warranty diagnosis, iterative research and development, and final production line checks. Meanwhile, a library of actual signal environments from locations worldwide is used to perform international design testing without leaving the lab.

Military Device Production Lines. Thanks to its ease of use, the GSS6425 is ideal for replaying sequences of concurrent, multi-frequency signals to give robust, standardised production testing for military devices.

Genuine Equatorial Scintillation – Anywhere. Atmospheric propagation effects such as scintillation are often specific to certain regions around the globe. Highly portable record and playback with GSS6425 allows genuine scintillation to be captured at the equator, and replayed with absolute realism in any location worldwide.

Interference and Jamming. It is well known that the weak GNSS signals can be jammed by local interferers, either intentionally or unintentionally.  Although some systems can detect a jammer, the GSS6425 can be used to analyze the interference and, therefore, help identify the source.

Automotive applications. R&D teams working on automotive positioning systems can use the GSS6425 to capture CAN bus and GNSS data in unison, avoiding the cumulative drift errors easily magnified by a lack of signal synchronisation. Moreover, the GSS6425’s ability to record both low- and high-speed CAN signals provides support for teams fault testing on-vehicle multimedia and control BCM (body control module) units.

GSS6425: The Key Capabilities at a Glance
Let’s take a look at some of the features of Spirent’s new, portable record and playback system:

• More Concurrent Satellite Channels
The GSS6425 can record up to three concurrent satellite frequency channels, at any one time.

• Master/Slave Synchronization — Double Performance
For even greater capacity, two GSS6425 units can be linked in as master and slave, doubling the record and playback capacity to six GNSS RF channels.

• Storage Capacity
The GSS6425 houses 2TB of storage, comprising 1TB of internal storage plus a 1TB removable external hard drive, allowing for simple transfer of data between units. This will accommodate three RF channels recorded at 30MHz for 11.2 hours, but this can be extended to 100 hours by reducing the number of RF channels or bandwidth. The recorded RF data is stored in two bits in-phase (I) and two bits quadrature (Q) format on the hard drives.

• Choice of Bandwidths
Users can choose between 10MHz and 30MHz on selected RF frequencies. The larger bandwidth allows the full power in the signal spectrum to be captured.

• Completely Self-Contained
The GSS6425 includes everything needed to record and replay RF signals, within its easily portable frame. No PC, external hard drive, or other peripherals are required to start testing. Even a lithium-ion battery is included to ensure maximum convenience when recording real signals at real-world locations.

• In-Built OCXO
The internal OCXO is used for both recording and playback, thus reducing the effects of having different clocks for record and replay.

• Synchronous Recording of non-satellite data
As well as satellite channels, the GSS6425 will record up to six other concurrent data sources, such as inertial and DR (dead reckoning) sensor outputs, 1pps (pulse per second) and CAN bus data. This information can be time-stamped with the GNSS data file to ensure perfect synchronization of all channels on playback, or stored asynchronously if preferred.

• Channel Attenuation
During playback, the output can be attenuated, by up to 30 decibels, in 1-decibel steps. Users can also attenuate a single channel relative to the other channels in small 0.5-decibel increments, up to a maximum of 9 decibels — allowing fine control over the signal mix.

• Controlling the GSS6425
The GSS6425 unit boasts an in-built web server. As well as its easy-to-use front panel, each unit can be controlled, monitored, or automated remotely over a network.

A selection of free white papers and webinar recordings on the uses and applications of GNSS record and playback technology can be downloaded from the Spirent website.