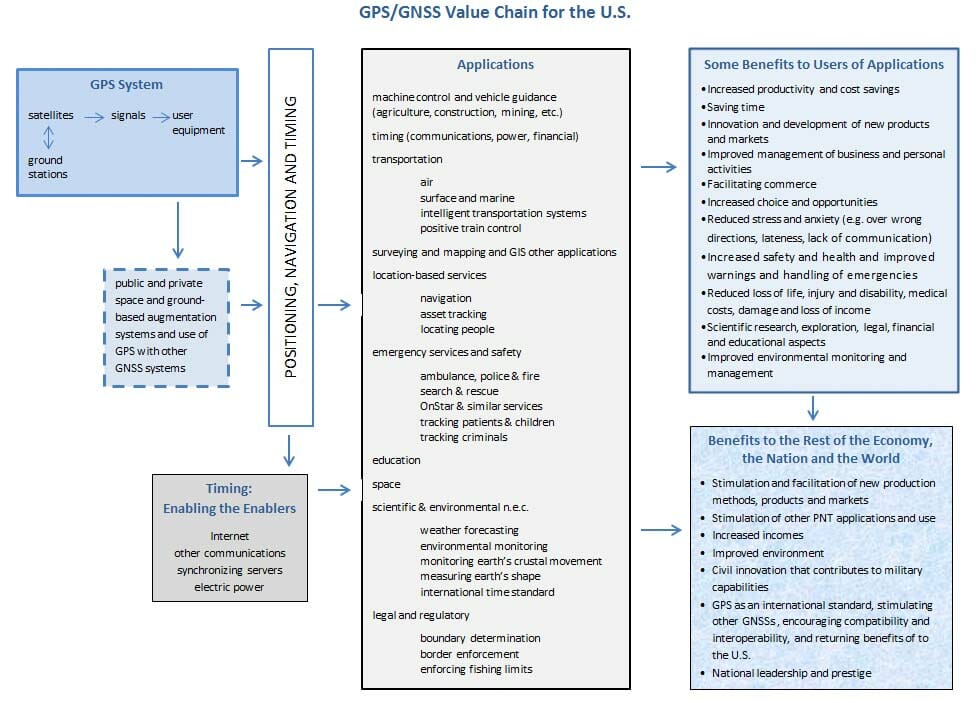 The results were presented to the advisory board, which helped guide the work, at its June 11 meeting.

“This is not just an academic exercise,” said Leveson. The research was undertaken, he said, “to have a basis for policy analysis which can be used for looking at the implications of actions such as allowing interference, spectrum sharing [or] reallocation, developing supplementary backup systems and toughening [receivers].”

The effort was requested by the National Executive Committee for PNT (the ExCom) after the relative benefits of GPS were questioned by advocates for LightSquared, a firm that sought in late 2010 to rezone frequencies near those used by GPS for a terrestrial wireless broadband network. LightSquared asserted during the ensuing political debate that the benefits of their use of the spectrum, which posed interference risks to GPS receivers, outweighed the potential costs to GPS users.

A 2011 Brattle Group study sponsored by LightSquared entitled GPS Interference:  Implicit Subsidy to the GPS Industry and Cost to LightSquared of Accommodation, said that LightSquared’s plan would “create approximately $12 billion in value to the economy and potentially 10 times that amount or $120 billion in benefits to consumers.”

That estimate was based on the value of spectrum for AWS (advanced wireless services), according to the study’s footnotes. Even so, the PNT community found itself at a significant disadvantage due to the diverse and widely dispersed nature of GPS applications that have emerged, and the fact that GPS receivers don’t have to be registered, made it nearly impossible to track the scope and value of GPS applications.

Although tests later showed that LightSquared’s proposed system would overload the vast majority of the nation’s GPS receivers, and the project is currently on hold, the firm has proposed an alternative plan and the issue is likely to reemerge.

But That’s Not All
The time and scope allotted for the first phase of the GPS study made it necessary to base it on previously conducted research. Although Leveson sourced some 70 different market studies, he stressed that the new estimates do not capture the full economic import of the GPS signals.

“In spite of the selection [of available studies], and in some ways because of it, the benefits were underestimated,” he said.

Those categories that did not have robust benefit numbers were not included in the estimate of annual GPS-based revenues, he said. Moreover, the categories of potential applications kept expanding as his work progressed, said Leveson, “both the number of them and what can be done in them.”

Among the applications left out were geographic information services and mapping other than nautical charts, asset tracking, land and coastal management, and construction. The benefits of GPS for agriculture were not counted for non-grain farmers such as fruit growers. GPS benefits were counted for positive train control but not other rail applications. Also excluded were the benefits from improved emergency response and as well as the reduction in the number of accidents due to GPS.

“There’s reason to believe the health benefits and safety benefits can quite large,” Leveson told the board.

Perhaps most importantly the study does not fully reflect the economic benefit of GPS timing applications, which are the foundation of the Internet and essential to financial transactions, telecommunications, and other critical infrastructure including the nation’s electrical power grid.

“This is just the first of a multi-layered study,” said Jason Kim, who coordinated the effort for the Department of Commerce. Kim is a senior policy analyst at the agency who serves as a senior advisor to the National Coordination Office for Space-Based Positioning, Navigation, and Timing. Commerce took the government lead on the study in consultation with the advisory board at the request of the ExCom, the federal government’s multi-agency coordinating body for GPS and related systems.

A high-powered team of some two dozen government economists plus half a dozen engineers and subject matter specialists oversaw the study’s methodology and results. Represented on the team, in addition to the chief economist of the Department of Commerce, were representatives from the Departments of Defense, Homeland Security, Transportation, Interior, Treasury and Agriculture as well as NASA, the National Oceanic and Atmospheric Administration, the White House’s Council of Economic Advisers, and the National Institute of Standards, which is coordinating the nation’s cyber security efforts.

Kim told Inside GNSS he expected the research to go well beyond this initial effort into another two or three phases and that potential funding already had been identified.

Besides filling in the data gaps, said Leveson, future research will try to quantify the international economic benefits of the GPS constellation and the broader economic implications of GPS signals in the United States, such as the system’s effect on jobs and its market prospects going forward.

Despite the shortcomings, the preliminary numbers are important as a foundation for studying future developments, Leveson said, “Things are changing so fast and interacting with each other so fast . . . we need some kind of baseline.”