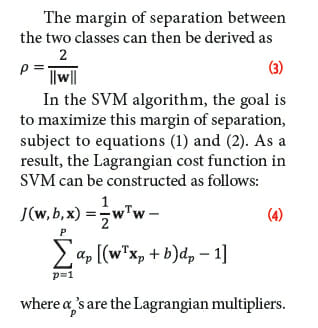 Most previous scintillation monitoring and detection methods were based on commonly used indicators such as the amplitude and carrier phase scintillation indices (e.g. S4 and σϕ), and their probability density functions (PDFs) (see W. Fu et alia (1999), S. Taylor et alia (2012) and D.V. Ratnam et alia (2015), Additional Resources). These indicators are the so-called lower-order moments of the scintillation statistics derived from standard deviations of signal parameters around their nominal trends. Abnormalities in these lower-order moments due to scintillation are often indistinguishable from other effects such as multipath and interference. In addition, these previous scintillation detection methods are usually based on traditional Neyman-Pearson detection theory (S.M. Kay (1998), Additional Resources) in which certain PDFs (e.g. Gaussian) under different hypotheses have to be assumed before training and detection. For these reasons, it is difficult for these previous detectors to have reasonable false alarm rates and missed event detection rates.

While missing event detection will clearly lead to missed opportunities to study potential interesting cases, a high false alarm rate will result in the data collection system capturing events that are not of interest to the researcher and lead to wasted storage space and analysis time.

To overcome the above problems, we have developed a new automatic scintillation detection technique using a machine learning algorithm, called support vector machine (SVM) (see articles from Y. Jiao et alia (2017, 2016 and 2017), Additional Resources). The SVM algorithm is based on the Structural Risk Minimization (SRM) principle, which seeks the boundary with the greatest separation of the two classes in the data samples (see S. Haykin, (2009), Additional Resources). The data samples are transformed into high-dimensional space, where the data will reveal features that could not be captured by lower-order moments of the signal statistics. Moreover, unlike algorithms based on the traditional Empirical Risk Minimization (ERM) (e.g. minimum square error, least squares, and least mean squares), which uses empirical PDFs of the signals to minimize the error between the desired output and the actual output (see again S. Haykin, (2009), the SVM algorithm does not have to assume the PDFs for signals under different hypotheses. Finally, the SVM algorithm can further transfer the data samples that are not originally linearly separable into even higher dimensional space where they may be linearly separable.

The basic concept of SVM is shown in Figure 2 (see figure at the top of this article). Given a training data set

where xp ∈ ℝN is the pth input sample, dp = ±1 represents the desired label for two classes. If the classes are linearly separable in ℝN, then the discriminant function g(x) = wTx + b exists such that


In the SVM algorithm, the goal is to maximize this margin of separation, subject to equations (1) and (2). As a result, the Lagrangian cost function in SVM can be constructed as follows:

where αp’s are the Lagrangian multipliers.

The further development of SVM techniques is mainly established on the solution of equation (4). For detailed mathematical descriptions and derivations, the readers are referred to Y. Jiao et alia (2017) and S. Haykin, (2009).

In this article, we summarize the findings reported in Y. Jiao et alia (2017, 2016 and 2017), Additional Resources, which used a large volume of real scintillation data collected from stations in the northern auroral and equatorial areas to train and test the SVM-based amplitude and phase scintillation detectors. The performance of the detectors will be mainly reviewed, including validation accuracy, testing performance on novel data, and concurrent amplitude and phase scintillation detection performance using similar SVM techniques using data from equatorial regions.

The content of the training vector for a three-minute data block is listed in Table 1. The first entry in a column training vector is the class label assigned manually. The second and third entries are the maximum and the average S4/σϕ index values within the block. To test the impact of the index values on the performance of the SVM detectors, the second and third entries can be turned on or off in the training. The rest of the entries in the training vector are power spectrum densities (PSD) for different frequencies obtained from performing short-time Fourier Transform (STFT) on raw signal intensity and detrended phase measurements for amplitude and phase scintillation detection, respectively.

The performance of the amplitude and phase scintillation detectors is evaluated in terms of the overall accuracy, and the true positive rate (TPR) and the false positive rate (FPR) of the operating point as listed in Table 2. TPR and FPR are also commonly referred to as “hit rate” and “false alarm rate”, respectively.

They describe the probability of categorizing a target (e.g., a scintillation event) as present when it is truly present or truly absent. In general, the higher the TPR or the lower the FPR is, the better the performance of the detector is. In this study, there are four variations of the detector implementation: the S/σ4ϕ  features (2nd and 3rd entries) are either included or excluded in the training vectors; and the SVM algorithm is either linear SVM or medium Gaussian kernel SVM with a kernel scale of 9.1.

Test Performance on Novel Data
To test the generalization capability of the SVM scintillation detectors, several segments of novel data from the training data sites and from other data sites are used. Figure 4 and Figure 5 show test results of the SVM amplitude and phase scintillation detectors using novel data from the training data sites (subplots (a)) and sites not involved in training (subplots (b)). Only the linear SVM technique is used for testing as it shows similar performance to the medium Gaussian SVM in the validation, and is easier to implement.

Results in Figure 4 and Figure 5 show that all the SVM detectors are able to capture strong scintillation events. However, for phase scintillation detection, the SVM detector trained with σϕ features show obvious miss-detection of medium to weak scintillation events, while the detector trained without σϕ features seem to have no problem in detecting weak to strong scintillation. This phenomenon shows that the absolute values of S4 and σϕ indices alone are not reliable indicators of scintillation activity. For phase scintillation, higher dimension features such as the spectral contents may offer a more reliable means to distinguish scintillation from other activities that impact phase measurements. This is the main reason why a machining learning-based approach that exploits the high-dimensional features can outperform traditional Neyman-Pearson detectors which are solely based on assumed models of low-order statistics such as scintillation indices.

In addition, Figure 4 and Figure 5 demonstrate that the linear SVM detectors trained without S4/σϕ features have good generalization capabilities, as they are effective on novel data taken at different locations from the training data sites.

Summary and Conclusions
This article introduces a SVM-based machine learning algorithm for autonomous ionospheric amplitude and phase scintillation detection on GPS signals. The input of the detectors is the PSD of the raw signal intensity and the detrended phase measurements. Instead of having to acquire knowledge of the PDFs of the signals, the machine learning algorithm learns the different high-dimensional features for non-scintillation and scintillation events from the training data, and automatically generates a discriminative hyperplane to optimally separate the two classes with the maximum separation space.

The trained SVM amplitude and phase scintillation detectors were evaluated in validation and testing, which demonstrate good validation performance and generalization capability in testing. A summary of the findings and conclusions in this work is recapitulated below:

Note: The methodologies and results presented in this article are based on materials presented in articles by Y. Jiao et alia (2017, 2016 and 2017), Additional Resources.