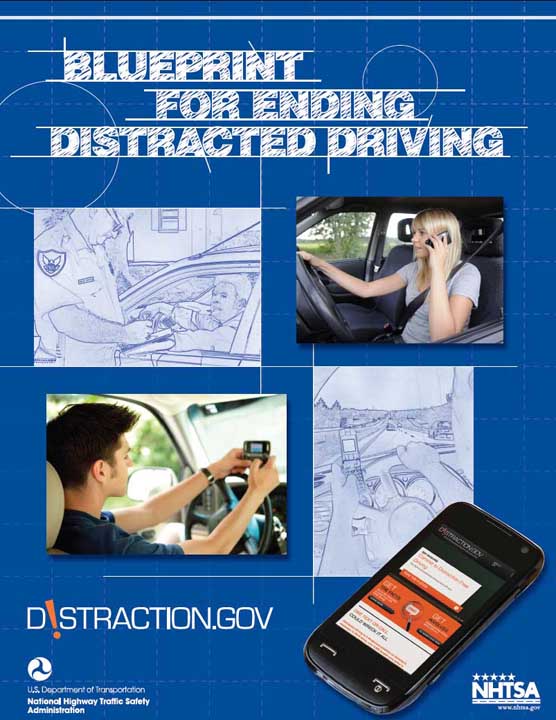 Highway safety officials are crafting guidelines aimed at pushing manufacturers to make portable electronic devices — including cell phones, hand-held navigation receivers, and navigation apps — less likely to distract drivers. They may face some push back, however, from members of Congress who are already questioning whether GNSS devices should be included under the proposed standards.

Highway safety officials are crafting guidelines aimed at pushing manufacturers to make portable electronic devices — including cell phones, hand-held navigation receivers, and navigation apps — less likely to distract drivers. They may face some push back, however, from members of Congress who are already questioning whether GNSS devices should be included under the proposed standards.

The new guidelines will be the second of a trio of technology-design rules suggested under the Blueprint for Ending Distracted Driving published by the National Highway Traffic Safety Administration (NHTSA) in 2009. Under Phase 1 NHTSA issued guidelines for equipment installed in vehicles by auto manufacturers. Their third group of guidelines “may address voice-activated controls to further minimize distractions in factory installed aftermarket and portable devices,” according to the Blueprint.

“Navigation functions, whether on cell phones or on other portable devices like Garmin’s, will fall within the scope of the Phase 2 Guidelines,” said Kathryn Henry, a spokesman for the U.S. Department of Transportation (DoT) of which NHTSA is a part. Garmin said it was not in a position to comment because the guidelines were not yet published. TomTom, another receiver manufacturer, did not respond to a request for comment.

The first round of guidelines, comprising some 281 pages issued April 23, included principles such as keeping a driver’s eyes on the road with at least one hand on the steering wheel, keeping tasks no more distracting than tuning the radio and preventing a driver from using some functions believed to be inherently distracting — like continuously displayed images — by preventing them from operating while the car is running.

Such “per se lock outs” include displays of video not related to driving and “certain graphical or photographic images” as well as displaying text for reading or the ability to type in a message.

The April vehicle-installed equipment guideline were voluntary, said Henry, and the portable device guidelines will be, too.

But just because manufacturers can choose to ignore the guidelines does not mean they lack teeth, suggested Justin Berkowitz, East Coast Bureau Chief at Car and Driver magazine.

“Should — or, perhaps, when — a group of people sue a company because their cars’ text-message readers distracted them enough to crash, compliance with NHTSA’s guidelines will very much be a part of the picture,” Berkowitz wrote about the Phase 1 guidelines. “Compliance (or lack of it) even with voluntary industry standards comes up all the time in product liability lawsuits.”

Pushback from Manufacturers
Changes that might be suggested in the portable-device guidelines remain uncertain, but manufacturers are already concerned, suggested Rep. Tom Petri, R-Wisconsin, the chairman of the House Highways and Transit Subcommittee. He wrote to NHTSA, asking about their authority to issue regulations covering portable devices and then publically queried the agency’s chief on the matter.

“Questions are being raised in the industry,” Petri told NHSTA Administrator David Strickland during a November 19 hearing on autonomous vehicles. “I understand [NHTSA] is considering guidelines regarding portable electronic devices such as GPS navigation systems and . . . smart phones and other mobile communication devices, which are not integrated into the vehicle but are used in the vehicle and out of the vehicle and all around. Do you have legislative authority to do that now or do we need to address that to figure out how that works within our congressional division of responsibility?”

“The core is through the [National Traffic and] Motor Vehicle Safety Act where we have the statutory authority to clearly regulate the full automobile on road,” replied Strickland. That mandate, he said, includes motor vehicle equipment and thereby things like smart phones with navigation apps.

“You’ll see the iPhone application has three tabs. One has a person walking for walking navigation. One has one for transit, for transit directions. But there is also one for a car — that is a piece of motor vehicle equipment,” Strickland continued. “I think we have very strong precedent to be able to make that extension. In addition to that, there are applications that may not be specifically designed or intended for use in the vehicle, but can reasonably be expected to be used in a driving environment. Those are also motor vehicle equipment.”

“While that authority is not limitless in that area, it is very broad,” Strickland added, “and we plan to work collaboratively not only with the manufacturers, which we already have, but with those device manufacturers and applications manufacturers through our work on guidelines to make sure all of these things are all working in a proper zone of safety.”

The ultimate goal, Strickland said, “is a technological breakthrough” that would make it possible to tell the difference between the driver and the passenger such that the driver would “have to interlock their device or pair their device with a vehicle with a good safe driving display that follows our inter-vehicle guidelines,” while allowing “the passenger to play as many games of angry birds as they want.”

Auto manufacturers, however, are concerned that, without new guidelines, consumers may just skip the step of linking their devices to their automobiles.

"Automakers commend the NHTSA Administrator for recognizing the importance of hands-free technology, and we also commend NHTSA for supporting the use of dynamic mapping for navigation screens. Drivers want that function in their dashboard systems, and we think it makes sense to provide it as a means of discouraging drivers from using hand-held phones as GPS systems,” the Alliance of Automobile Manufacturers (AAM) wrote in a statement issued just after the initial guidelines were published.

“NHTSA did limit collective task times,” the AAM statement continued. “Our concern is that limiting built-in systems without simultaneously addressing portable devices could result in drivers choosing not to connect their phones in order to access the functionality they want.”

At least one member of Congress appears ready to exclude navigation devices from new anti-distraction efforts. In the Distracted Driving Prevention Act of 2013, a bill introduced the same day the Phase 1 guidelines came out, Rep. Eliot Engle, D – New York, proposed banning the hand-held communications devices and boosting penalties for those caught on calls while driving.

Petri too, appears cautious about shape of the next round of guidelines.

“We want to obviously be sensitive to the requirement of safety of the vehicle but to have too broad a regulation where its inappropriate because something might be carried on a vehicle raises issues as well,” he said, “so I am glad you are taking an interagency approach and are doing a lot of consulting with industry and other experts to figure out how to prevent us from snarling things up.”