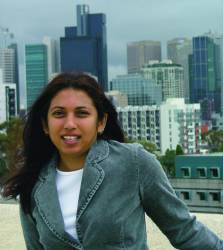 Allison Kealy caught the GNSS bug at age 18 while waiting beneath the starry skies of Trinidad for the moment when enough satellites would become available to allow an Ashtech receiver to compute her position. Up to that point, her training as a surveyor was limited to land-based equipment.

Allison Kealy caught the GNSS bug at age 18 while waiting beneath the starry skies of Trinidad for the moment when enough satellites would become available to allow an Ashtech receiver to compute her position. Up to that point, her training as a surveyor was limited to land-based equipment.

During that time Kealy’s interest in technology and GNSS propelled her from her birthplace in Trinidad, a village of approximately 10,000 called Penal, to the UK’s University of Newcastle for a doctoral degree in geodesy. Ultimately, the journey led her to the University of Melbourne in Australia where, in 1999, she was the first woman appointed to an academic position in the Department of Geomatics.

Her pioneering spirit is perhaps most evident in her contributions to an exceptional project cataloguing some 50 Aboriginal paintings at Australia’s iconic Uluru (Ayers Rock). In 1985 ownership of Ayers Rock was returned to the local Anangu people who consider it sacred and have called it Uluru (pronounced oo-luh ROO) for at least 40,000 years. In 1987, Uluru National Park was declared a World Heritage site.

At the request of the Anangu, a team of Melbourne scientists including Kealy was enlisted to create a digital record of the rock art. “To create a map that would allow us to establish a historical record, we needed to get the coordinates so it would be possible to revisit the sites in the future,” Kealy said. “Some of the art is located in places that GPS alone won’t reach. The team was keen to investigate the use of combined GPS and GLONASS receivers; so, I came along to run that part of it.”

Their task was complicated by the secrecy surrounding many Aboriginal sites and the need to minimize their movement on the massive landform out of respect for the Anangu, who do not climb Uluru because of its great spiritual significance. The team was granted a unique exception in order to gain access to paintings located within the walls of the enormous red sandstone monolith, which rises abruptly more than 300 meters above the Australian plains and stretches nine kilometers around its base. When viewed from a jet, Uluru resembles a colossal Paleolithic cutting tool pointing eastward.

The Melbourne team was nearly stymied by cross-cultural communication gaps.

“At one point our Anangu guides thought that the GPS was like satellite transmissions,” said Kealy, whose efforts to undo misunderstandings included scratching illustrations into the dirt to show how the technology worked. “They were afraid we were beaming the images elsewhere. It took a lot of work to convince them otherwise. You didn’t want to abuse the trust and you weren’t sure what the protocols were. An Aboriginal woman who worked for the parks service helped me become more aware of what was going on.”

Fostering a Tradition of Innovation

The Uluru project was done in 2000, the same year that Kealy received The University of Melbourne’s prestigious Universitas 21 Fellowship for Excellence in Teaching and Research. The following year she received the prize for the best research paper at the Institute of Navigation (ION) international conference in Salt Lake City. And she had yet to celebrate her 30th birthday.

Currently she is supervising the doctoral work of eight men and women. In less than six years her lab has published an impressive number of articles in international journals. At the same time, her work developing interactive multimedia environments for teaching satellite positioning and integrated systems in geomatics has won grants and accolades.

Kealy and one of her students, Stephen Scott-Young, were the first Australians to win a BMW Scientific Award for developing a driver’s aid capable of compensating for zero visibility due to whiteout conditions, pea soup fog, or the torrential rains common in tropical places like Kealy’s native Trinidad.

“This is an in-car navigation screen that gives you a graphical image of what is ahead so you can see the edge of the road, the center line, and where you are relative to the other the markers on the road,” she explained. “We also did some thinking about having other cars equipped to give information about their locations as well.” When Scott-Young finished his Ph.D. in 2005, he received an ION student award for his work on the project.

Kealy credits her mentor and Ph.D. advisor, Paul Cross, with igniting her own enthusiasm about teaching and research. Cross is department head and Leica Professor of Geomatic Engineering at University College in London.

“He was quite enthusiastic about what he was doing and was very patient and encouraging with me,” Kealy said. “He inspired me to look at situations where GPS didn’t work, and to think about ways of integrating of GPS with other technologies. He demonstrated that success wasn’t only about knowing your stuff, but that it was just as important to build relationships with people.”

The ability to imagine alternatives continues to guide Kealy’s reactions to requests for using GPS in new ways. Recently she became involved in a project for an Australian company that supplies drug addicts with clean needles.

“They want to do a documentary showing the life cycle of one of these packs of disposable syringes,” she said. “They were looking for a tracking technology for this application. GPS won’t work in the way that they originally envisioned, but we are coming up with combinations of technologies that can be used to track the packs.”

Kealy expects the future to bring applications that may seem extreme now – but then, she can remember wondering at the notion that satellites would soon render land-based surveying stations obsolete.

“It’s hard not to feel very humbled by the opportunities I’ve had,” she said. “Sometimes the research that you do when you’re in a more developed country seems like a luxury. I give my teachers in Trinidad a lot of credit for getting me started.”

“He is incredibly inspirational. He visited Trinidad the year that I finished my undergraduate degree. He was and still is quite visionary about satellite positioning.”

GNSS Event That Most Signified that GNSS has “Arrived”
“Geocaching”

Popular Notion About GNSS That Most Annoys
“That you don’t need to understand GNSS to use it – just switch on a receiver and off you go. Current generation GNSS still has its limitations.”

Influence of Engineering on Her Daily Non-Work Life
“I’m a big fan of ‘if you work with technology you must live it.’ I surround myself with technologies that are designed to make life easier.”

Favorite Non-GNSS Activities
“Spending time with my family and traveling.”

On Being a New Mother
“I’m treating it like another research project, going through the process of figuring it out as it goes along. With no instruction manual or 24-hour technical support line it’s a challenge. I’m back to work full time now and lucky to have a fantastic husband and very supportive colleagues and friends.”