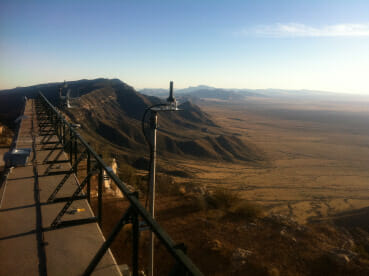 A pair of LocataLite transmit antennas overlook a section of the White Sands Missile Range blanketed by the Locata high-precision ground-based positioning system.

The Air force will field Locata’s new technology to supply them with extremely accurate “reference truth” positioning to cover 2,500 square miles of White Sands when GPS is being completely jammed during equipment tests by Department of Defense (DoD) and other authorized users on the range.  The Locata transmitters can be permanently positioned on the range or moved as needed.

Under ther new contract Locata will provide the Air Force with Locata receivers and LocataLite transmitters and also:
a)     deliver extended hardware warranty, along with ongoing Locata software and firmware upgrades, through to the year 2025
b)    supply multi-year support for the installation, fielding, and testing of Locata networks, and
c)     provide long-term consultation and expert technical advice to ensure optimal operational performance of the USAF’s fielded LocataNet systems.

Christopher Morin, technical director for the 746 TS, said that the LocataNet provided time and position truth, independent of GPS that was better than 18 centimeters (6 inches) per axis for aircraft flying at a distance of 30 miles (50 kilometers) with speeds up to 350 mph (550 km/hr) at elevations up to 25,000 feet. The system also provides independent nanosecond synchronization across the LocataNet.

“Further analysis has shown that if we optimize the LocataNet deployment, characterize its errors, and tightly couple its range and carrier-phase measurements with the other GPS and inertial components . . . into the [USAF’s next-generation Ultra High Accuracy Reference System] solution post-processing software, I am confident we will be able to meet our 5-centimeter (2-inch) per axis truth reference objective,” Morin said.

“I am very pleased with the LocataNet’s demonstrated ability to produce an accurate, dynamic truth reference from the relatively static implementation they had already deployed in the mining industry,” he added.
Leica Geosystems recently announced the availability that incorporate Locata’s technology into Leica’s Jps (the Jigsaw Positioning System) for the mining industry. <https://www.insidegnss.com/node/3318>

“The 746 Test Squadron leads the U.S. Department of Defense tri-service GPS Test Center of Expertise,” said Nunzio Gambale, Locata’s CEO, of the contract award. “This famous squadron is without doubt the best source on earth to validate Locata’s revolutionary technology advances. The 746 TS were not only instrumental in developing the original GPS system for the U.S. military, but they have a long history of pushing the limits of next-generation positioning. I cannot describe how proud the Locata team is to be awarded this contract.”