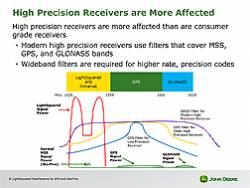 In what looks like a pre-emptive strike in the wake of extensive evidence that its proposed terrestrial wireless broadband transmissions will interfere with GPS receivers, LightSquared today (June 20, 2011) proposed to solve the problem by cut the power of its base stations in half and temporarily use a bandwidth further away from GPS.

In what looks like a pre-emptive strike in the wake of extensive evidence that its proposed terrestrial wireless broadband transmissions will interfere with GPS receivers, LightSquared today (June 20, 2011) proposed to solve the problem by cut the power of its base stations in half and temporarily use a bandwidth further away from GPS.

The action came only two working days after LightSquared’s last-minute plea to the Federal Communciations Commission (FCC) to postpone a report deadline for two weeks so that the Reston, Virginia–based company could analyze test results from a technical working group examining the situation. Presumably today’s proposal will be reflected in the FCC-mandated report now due July 1 on tests conducted in recent months and the company’s recommendations on how to proceed.

In a press release, LightSquared stated, “This solution will permit LightSquared to proceed with its business plan, protect the public’s stake in GPS, and lay the foundation for the future co-existence of a variety of wireless broadband services and GPS.”

Rather than a 10-megahertz swath of spectrum allocated to Mobile Satellite Services (MSS) space-to-Earth transmissions and adjacent to the lower end of the GPS L1 band, LightSquared now proposes to use a 10-megahertz section (unspecified in the press reloease) further away in the MSS band.

In what appears to be an effort to limit the damage caused by the adverse test results, divide the GPS user community, and lay the blame for the problem on GPS manufacturers, LightSquared’s press release continued, “Test results show this lower block of frequencies is largely free of interference issues with the exception of a limited number of high precision GPS receivers that are specifically designed to rely on LightSquared’s spectrum.

LightSquared said that, if the FCC allows it to move forward, it would “use this time to work closely with the FCC and the NTIA [National Telecommunciations and Information Administration), as well as the relevant U.S. government agencies and commercial GPS users, to explore mitigation possibilities and operational alternatives that will allow LightSquared to continue” to roll out its nationwide network of transmitters.

The proposal was immediately denounced by the Coalition to Save Our GPS, a group comprising nearly 200 GPS-related companies and organizations (including Inside GNSS), that has been critical of LightSquared’s plans.

In a press statement, the coalition said, “This latest gambit by LightSquared borders on the bizarre. Last week LightSquared unilaterally delayed filing of the study report that culminated months of intensive work to evaluate interference to GPS, because they purportedly needed two more weeks to analyze the results. Days later, well before the report is scheduled to be filed, LightSquared unilaterally announces that it has found a ‘solution.’”

The coalition’s statement continued, “LightSquared’s supposed solution is nothing but a ‘Hail Mary’ move. Confining its operation to the lower MSS band still interferes with many critical GPS receivers in addition to the precision receivers that even LightSquared concedes will be affected. The government results submitted to date already prove this, and the study group report will also confirm this.  It is time for LightSquared to move to out of the MSS band.”