Nearly a year later than expected, federal officials have published the final report of a study on the power levels GPS receivers can tolerate from activities in neighboring bands — a key factor in the kind of new applications that could be approved for those nearby frequencies.

The report may also inform the Federal Communications Commission’s pending decision on a proposal from Ligado Networks to add a potentially significant ground network to its system using frequencies zoned for satellites. The report and appendices can be found here.

Both the U.S. government and industry provided the GPS/GNSS receivers for this test. Though a list of the receivers and a great many details about the testing are included in the report some of the data is covered by nondisclosure agreements with industry — a fact that Ligado Networks has taken issue with in public forums.

The Department of Defense also conducted tests as part of the overall effort as did the Federal Aviation Administration (FAA). The FAA tested certified aviation receivers, the sort used in passenger and other types of aircraft. Civilian hobby drones and commercial unmanned aircraft, a huge prospective market for GPS receivers worldwide, typically use non-certified receivers.

The National Executive Committee for Space-based Position, Navigation and Timing (the ExCom) proposed the assessment in 2012 after tests showed a proposed broadband network would overload the vast majority of GPS receivers. That network was the idea of Virginia-based LightSquared, which needed the Federal Communications Commission (FCC) to allow frequencies adjacent to the GPS band — frequencies zoned to support satellites — be used for a high-powered terrestrial network. After the tests the FCC chose to set the proposal aside and LightSquared soon filed for bankruptcy, emerging a few years later with a modified plan and a new name, Ligado Networks.

“We propose to draft new GPS Spectrum interference standards,” wrote the ExCom co-chairs, “that will help inform future proposals for non-space, commercial uses in the bands adjacent to the GPS signals and ensure that any such proposals are implemented without affecting existing and evolving uses of space-based PNT services vital to economic, public safety, scientific, and national security needs.”

The report gathers together results and adds details on how the study team arrived at interference tolerance masks (ITMs) — that is the maximum level of power a GPS receiver can tolerate from a device in an adjacent band at different frequencies. The tests focused on an LTE signal (i.e. 4G mobile telecommunications) with researchers assessing the impacts of signals from large (macro) and small (micro) LTE cells in the urban areas. Macro cells comprise of a cell tower about 25 meters high with a cell radius of 0.25 to 1 kilometer. Urban micro cells were assumed to have 6-meter antennas and there could be one to three per macro cell. They also looked at macro cells in rural areas. 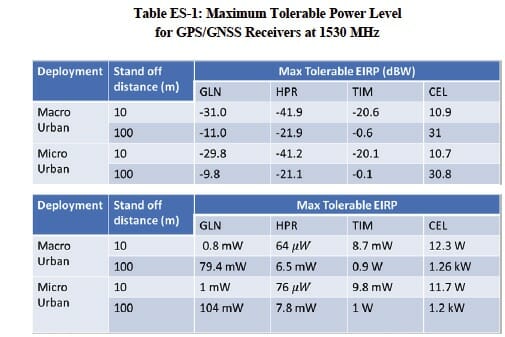 The yardstick for determining interference used in the Assessment is a greater than a 1 dB reduction in carrier-to-noise density ratio (CNR). Ligado has opposed the internationally accepted 1 dB standard, pushing instead for a degradation of user position information.

As was found in previous studies the impact of the signals was the greatest on high precision receivers (HPRs). The maximum power tolerable by an HPR was -41.9 EIRP (dBW) in the macro urban environment at a distance of 10 meters. The finding was very similar (-41.2 dBW) for the 10-meter micro urban environment. (See chart ES-1 above).

The Assessment also found that the impacts of interference could, in some cases, be felt for miles.

“The high precision category of receiver exceeds a 1 dB signal-to-noise density (C/N0) interference protection criteria at a distance beyond 14 km from the transmitter,” the study team wrote. “When this occurs, the behavior of the GPS/GNSS receiver can become unpredictable in its ability to meet the accuracy, availability, and integrity requirements of its intended application and a receiver in a mobile application may not be able to reacquire GPS positioning as the mobile application encounters multiple, closely-spaced emitters in an urban scenario. Furthermore, this category of receiver experiences loss of lock for low elevation GPS/GNSS satellites at distances up to 3 km with loss of lock on all satellites at approximately 1 km from the transmitter.

“It is unclear how the results would relate to the current plans of LightSquared’s successor as the firm is still working out its business model. Ligado has said it will  forgo the original LightSquared plan of offering wholesale broadband services across the country and instead has proposed to provide private custom networks and connectivity for the Internet of Things.