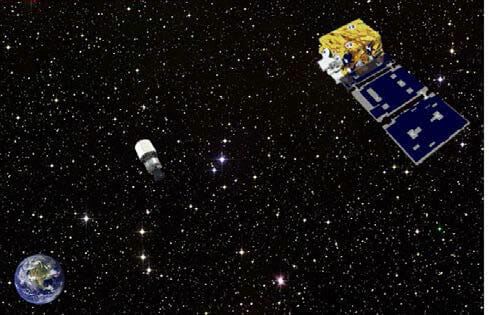 As part of AFRL’s research in advanced space situational awareness (SSA), the ANGELS program will examine techniques for providing a clearer picture of the environment around vital U.S. space assets. During its planned one-year mission life, ANGELS will test several new spacecraft technologies and operations methodologies.

The spacecraft hosts an SSA sensor payload to evaluate techniques for detection, tracking, and characterization of space objects as well as attribution of actions in space. ANGELS will evaluate these SSA techniques in a limited region around the second stage of the Delta IV rocket that carried the satellites into space, testing maneuvering concepts several hundred kilometers above geosynchronous Earth orbit (GEO).

The GPS system uses advanced algorithms from NASA to receive GPS side lobe signals and generate near-continuous navigation solutions, according to the Air Force. High-performance accelerometers are also on board to precisely measure small spacecraft accelerations for enhanced guidance and navigation. An experimental vehicle safety system will explore methods for reducing the probability of collision with other space objects in an increasingly congested space environment

The GSSAP spacecraft will offer a clear, unobstructed, and distinct vantage point for viewing resident space objects orbiting earth in a near-geosynchronous orbit without the disruption of weather or atmosphere that can limit ground-based systems.

According to the Air Force, data from GSSAP is expected to contribute to timely and accurate orbital predictions, enhancing knowledge of the geosynchronous orbit environment, and further enabling space flight safety to include satellite collision avoidance.