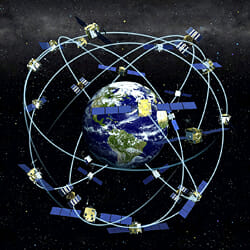 The fully operational GPS constellation has 24 satellites. In 2007, 30 are actually in orbit.


The Global Positioning System (GPS) is the first and only fully functional Global Navigation Satellite System. Developed and operated by the U.S. Air Force for the Department of Defense (DoD), GPS is designated by executive and congressional action as a dual-use system available without user fees for civil and military use.

The Global Positioning System (GPS) is the first and only fully functional Global Navigation Satellite System. Developed and operated by the U.S. Air Force for the Department of Defense (DoD), GPS is designated by executive and congressional action as a dual-use system available without user fees for civil and military use.

Although the constellation of 31 transmitting satellites and multiple on-orbit spares is populated well beyond its 24+3 baseline, the program is still experiencing bumps in the road.

As of 2016, the Next Generation Operational Control System (OCX), a new ground system that involves a rebuilding nearly from scratch of the
infrastructure that monitors and controls the GPS satellite
constellation, has undergone multiple delays with an estimate of operational readiness in 2023.

FIRST LAUNCH IN 1978
The first production-grade GPS satellite was launched February 22, 1978, although an earlier spacecraft — the second Navigation Technology Satellite (NTS-2) placed into middle earth orbit (MEO) the preceding year — is sometimes referred to as the original GPS space vehicle (SV). Up to 31 operational GPS satellites have been in orbit at one time, but the official specification for a fully operational capability (FOC) constellation calls for only 24 SVs.

SIGNALS
GPS spacecraft transmit navigation messages on several L-band frequencies, with military signals able to be encrypted and civil signals broadcast in the open. All signals are spread spectrum and use code division multiple access (CDMA) technology in which different SVs are distinguished by unique pseudorandom noise (PRN) codes. The so-called coarse acquisition (C/A) code — broadcast at the Link-1 (or L1) band centered at1575.42 MHz and employing bi-phase skip keying (BPSK) modulation — is the original civil signal, but modernized civil signals are being introduced at the L2 (1227.60) and L5 (1176.45 MHz) bands. The military precision (or P-code) and its encrypted form (Y-code) is broadcast at L1 and L2 frequencies; a modernized M-code signal for DoD and allied users is currently being implemented.

OVERSIGHT
Design, development, and acquisition of the GPS space, ground, and military user-equipment segments is handled by the GPS Directorate (formerly NAVSTAR GPS Joint Program Office), which is part of the Space and Missile Systems Center at Los Angeles Air Force Base, California. A thorough documentation of the signals, which can be used as the basis for designing civil GPS receivers and related products, resides in the GPS Interface Specifications (formerly called Interface Control Documents or ICDs) maintained by the GPS Wing. The current GPS documentation, including IS-GPS-200 and the draft IS-GPS-800 for the new L1 civil signal (L1C), can be found and downloaded here.

Operational control of the satellites and ground facilities is maintained by the 2nd Space Operations Squadron, 50th Space Wing, at the GPS Master Control Station at Schriever AFB, Colorado. Policy and management oversight resides with the National Space-Based Positioning, Navigation, and Timing Executive Committee cochaired by deputy secretaries of defense and transportation.