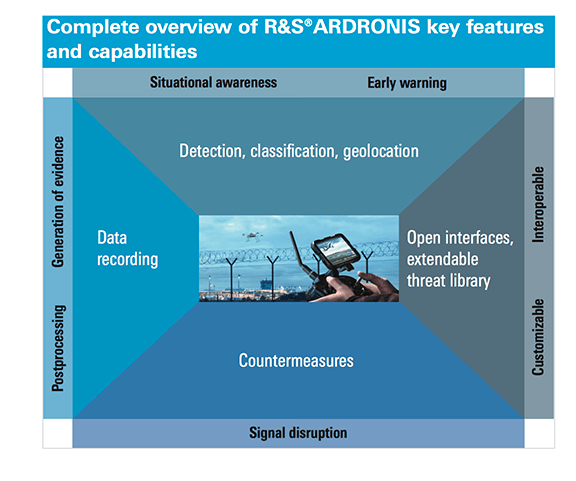 The Federal Criminal Police Office (Bundeskriminalamt/BKA) commissioned ESG Elektroniksystem- und Logistik-GmbH to ensure the reliable and effective protection of the G20 Summit in Hamburg, Germany (July 7-8 2017) against the unauthorized use of drones with components of their modular Counter-UAS System GUARDION.

The Federal Criminal Police Office (Bundeskriminalamt/BKA) commissioned ESG Elektroniksystem- und Logistik-GmbH to ensure the reliable and effective protection of the G20 Summit in Hamburg, Germany (July 7-8 2017) against the unauthorized use of drones with components of their modular Counter-UAS System GUARDION.

GUARDION once again proved an integral part of the security infrastructure of a large scale political event with heads of states and governments. Part of the solution for reliably detecting and defending against drones is the R&S Ardronis from Rohde &
Schwarz. This radiomonitoring solution enables users to identify drone control signals early on, to locate and even stop the drone.

In general, GUARDION combines customer specific, scalable solutions to the problem of detecting and defending against commercially available drones thus protecting the customer from the dangers emanating from their unauthorized use. GUARDION is a cooperation of ESG, Rohde & Schwarz and Diehl Defence, benefiting from expertise in the fields of radar, radio detection and electro-magnetic countermeasures as well as sophisticated command and control systems.

Modular Drone Defense System
Commercial drones represent a serious security risk to major public
events, but also to sensitive infrastructures and facilities such as industrial
testing grounds, large industrial plants, German Armed Forces properties
and correctional facilities. A particular risk is the unauthorized use
of such drones for espionage, provocation or even criminal and terrorist
purposes, according to ESG.

Since early 2015, ESG Elektroniksystem- und Logistik-GmbH, Rohde &
Schwarz and Diehl Defence GmbH have been cooperating
and working intensively on a joint solution to counter these threats.
The resulting solution includes different sensors and appropriate effectors
as well as a command and control system. The modular drone countering
solution consists of the following components:
• ESG’s TARANIS command and control system
• R&S Ardronis radio-controlled drone identification and
countering system
• Diehl HPEMcounterUAS electromagnetic pulse sources
• Other optional sensors such as cameras and radars

The cooperation ensured effective protection against the unauthorized
use of commercial drones and thus against an omnipresent security risk
during the 2015 G7 summit in Germany. Following its successful debut,
the solution ensured the safety of other major events such as a visit from
the U.S. President to the Hanover Fair.

The solution addresses the complexity of drone threats with a hierarchal
approach, offering a modular solution that is scalable and customizable
using equipment relevant to the given scenario. In the context of protection against drones, ESG’s state-of-the-art
TARANIS command and control system can be connected to various numbers
of sensors that detect drones and/or their remote control as well as to
effectors that counter the immanent drone threat.

Due to the flexible, mobile data connections, sensors and effectors can be
placed anywhere and the situational picture can be distributed to stationary
or mobile operators.

R&S Ardronis focuses on the remote control radio link of commercial
drones. The subsystem can detect and identify the drone and take bearings
on the remote controller, even before the drones take off, according to Rohde & Schwarz. Its ability to distinguish
the remote control signals from other emissions within the same
frequency band makes it highly reliable. Also, it alerts security
personnel early on so they can respond to the potential threat in a timely
manner.

R&S Ardronis is designed also to disrupt the drones’ remote control radio links. It
exactly matches the transmissions on the remote control signal and does
not interfere with other radio links. No longer controllable by their pilots,
the drones are forced into failsafe mode.