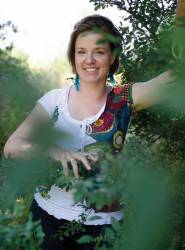 But she came face to face with her true calling in the remote cornfields of Shandong Province, China, in 1998. That summer, in collaboration with the Chinese Hydraulic Institute, she was mapping the hydraulic systems built by local farmers in the Yellow River catchment area. Except for an interpreter with no technical expertise, she was working alone in the fields, her differential GPS antenna peeking up from the corn.

“Very quickly, word spread among the villagers that a young white woman was surveying the fields using satellites signals,” she says.

The survey required that she anchor herself to an available geographical system. She knew there were ground markings somewhere, but it wasn’t easy for anyone, least of all a stranger, to find out where they were. There was no one to ask about it, and no one who could or would answer.

“So there I was, out there in a field one morning, when a group of elderly gentlemen came looking for me and asked me to follow them,” she says, “I had to trust them — I had no coordinates!”

The procession ended up in a small village, standing over a deep and recently dug hole in the ground.

In the middle of the hole was something that looked like an upturned porcelain cup, blue and white, with a dot in the center. It was a very old ground reference point, part of an ancient Chinese mapping system, Renaudin says.

Renaudin’s guides, it seemed, had understood what she was looking for and had wanted to help. Someone among them had known about this mapping point, and they’d dug down to find it.

“I didn’t have the coordinates of where we were standing; so, I couldn’t really make any use of the point,” she says, “but it was nevertheless a magical moment for me — first being here in this distant place, and then finding myself standing all in a circle with these strange and wonderful people and feeling somehow linked to the long history of human navigation.”

Renaudin has since gone on to achieve a brilliant career in GNSS, but the memory of her brief encounter with history has stayed with her, and continues to inspire her even to this day.

Fast forward to 2013 when Renaudin was awarded the prestigious Marie Curie Career Integration Grant to develop a fully autonomous personal navigation system, independent of locally deployed sensor networks or surveys, and on to February of this year when she became head of the GEOLAB (geolocation laboratory) of the French Institute of Science and Technology for Transport (IFSTTAR).

Obviously, a lot happened in between.

French Roots in German Soil
The daughter of French nationals, Valerie Renaudin grew up in Germany’s Baden-Württemberg region, where her roots still lie. But at home she spoke French.

Her father was a mathematics professor and her mother an elementary school teacher, both working with the children of French Forces stationed in Germany.

Renaudin added German to her native French and came to love German culture, especially Carnival, the pre-Lenten festival known elsewhere in Germany as Fasching, which takes place each year in February or March.

“Kids and adults would dress up and have fun, living for a while outside of the daily routine and rules. It was so much fun! It made you feel creative, and this feeling always seemed to stay with us when we went back to school, she recalls.

But her parents had grown up in France during less fun-loving times after World War II; so, Renaudin was raised in a hard-working family with a taste for mathematics and engineering and whose parents encouraged her to continue with higher education.

As a child, Renaudin had good spatial orientation skills and enjoyed drawing exercises in perspective, try-ing to mentally change their focal point. When it was time for university, she earned her first degree in geomatics engineering at L’École supérieure des géomètres et topographes in Le Mans, France.

Later, she took a class in geodesy during her Master of Science program, and that sparked her interest in GNSS.

“I discovered how GNSS involves all geometrical aspects of Earth modeling, but it also enables you to navigate around the world,” she says. “That added a new dimension to geomatics surveying, and very soon GNSS became my favorite topic.”

Swissat
During 1999–2000, she carried out research for her M.S. degree under geomatics engineering firm GeoAstor Ltd. in Zurich, Switzerland. There she worked on the design of a real-time differential positioning service, based on a permanent network of GPS and GLONASS dual-frequency receivers. Her final project was essentially the pilot phase of what would become the Swissat permanent GNSS network.

With the pilot project completed and her engineering degree in hand, Renaudin wanted to implement her research results on a larger scale — the rollout of a permanent GNSS reference network throughout Switzerland. GeoAstor went all in, hiring Renaudin and helping find financial investors for the enterprise.

Swissat launched with GeoAstor Ltd. and Swissphone Ltd. as co-investors, and after two years of driving around the country looking for the best base station sites, Renaudin had set up 24 sites connected by a virtual private network.

Based in a German-speaking canton near Lake Zurich, Swissat AG continuously tracks GNSS signals, computes differential corrections, and transmits these for use in the field. It was the first nationwide GPS and GLONASS permanent reference network for real-time, kinematic, centimeter-level positioning.

But technology was only part of her job at Swissat. From 2000 to 2004, Renaudin undertook the bilingual management of technical and sales teams, operational marketing of the company, planning, administration, negotiation with suppliers and subcontractors, and devising a strategy for international development.

Not to mention conception and installation of the first GNSS station connected in real time to a network by a full duplex radio.

“Ten years ago,” she says, “the community did not believe in using GLONASS signals, because the space segment was on the decline, but we proved that combining satellite signals from different constellations was essential for addressing the challenges of urban surroundings.”

“Being a young, female engineer leading technical teams and negotiating with GNSS receiver manufacturers was a real challenge, but it was an experience that definitely shaped my professional path,” she says.

Among the lessons encountered on that professional path: Bringing research results to market isn’t for the fainthearted. “Technical success does not necessarily mean an economic success, not without hard work, strong marketing, and some serious number crunching,” says Renaudin.

Another Tour of Academia
By 2004, Renaudin was ready for bigger things, starting with a stint back at school for a doctoral degree at the École Polytechnique Fédérale de Lausanne (EPFL) focused on pedestrian navigation.

There she joined civil and environmental engineer Bertrand Merminod’s team at EPFL’s Geodetic Engineering Laboratory (TOPO) where they worked on a €19-million, multi-year project funded by the European Union’s research and technological development initiative.

Renaudin designed navigation algorithms based on ultra-wideband (UWB) signals, assisted-GPS data, and inertial MEMS, and she invented an nearly self-deployable navigation solution for improving the safety of fire fighters on the job. For this she received an award at the 2007 European Navigation Conference.

By this time, Renaudin had married a fellow geomatics engineer, Erwan Renaudin, she met at school before her graduate studies. The couple had a son and daughter while she worked on her doctorate.

From 2009 to 2012, not skipping a beat, Renaudin worked with Gérard Lachapelle at the University of Calgary as a senior research associate and principal investigator on a $1.3-million project co-financed by Research In Motion (RIM) for enhancing localization performance in diverse environments, such as city streets and inside commercial buildings and malls.

WALKing in Privacy
In 2012, Renaudin returned to Europe and took up a position as senior researcher for IFSTTAR. At the institute’s center near Nantes, she launched a new team to work on a novel line of research into personal mobility, using innovative positioning and navigation methods.

Central to Renaudin’s autonomous personal navigation concept is the right to privacy. GEOLAB’s approach does not rely on wireless location methods, as do many of the “hybrid” navigation concepts currently being explored.

Smartphone and human sensor networks with new navigation functionalities have created a new paradigm for pedestrian mobility, she says, with wi-fi or cell phone networks used for positioning. But at the cost of potentially losing privacy.

“When you use these kinds of signals, you leave a trace,” she points out, adding, “Privacy issues, including protecting your ‘digital identity,’ are now a big concern in Europe, and [one’s own location] is a main feature of digital identity.”

The research Renaudin is doing falls under Europe’s smartWALK (smart Walk with Autonomous Localization Knowhow) project, which led to her Marie Curie Career Integration Grant . “The calculation principles of existing autonomous inertial and GNSS-based algorithms, developed for motorized vehicles, do not address the human dimension of pedestrian navigation,” she says.

“Our system relies on GPS signals only,” Renaudin explains, “along with inertial sensors, responding to physical forces. So, there is no recourse to installed terrestrial infrastructures. The point is that GPS only broadcasts; there is no return link. So, GPS plus inertial gives you all the benefits without leaving tracks.”

“What if our research on navigation could meet the requirement of ‘privacy by default’?” Renaudin asks. “This is what we expect to achieve, while still maximizing the efficiency of individual navigation.”

Renaudin’s engineering creativity is still so powerful that she may, indeed, finally succeed as one of the innovators who solve the thorny issue of technology versus privacy.

And yet engineering represents only a part of the elements that comprise Renaudin’s life. Among these is Irish dance, which she performs and teaches. “I have been dancing since the age of four and I hope never to stop.”

She remains close to her parents, who spend much of their time globetrotting and volunteering for humanitarian associations, and to her younger brother, who works in France as a specialized educator for immigrants. But through it all, Renaudin remains a wife and mother.

“We try very hard to keep a good balance between our professional and family lives,” she says of her husband. “One very important rule we have is that we will always live under the same roof, even if it involves professional sacrifice.”

Whether in domestic or professional life, Renaudin constantly strives to understand how things work, the underlying hypotheses and their limits.

“Only in imaginary and fantastic worlds do I stop breaking down systems,” she says. “This is sometimes most annoying to my children. But I’m their mom; so, what can they do?”

Thank their lucky stars, we say.