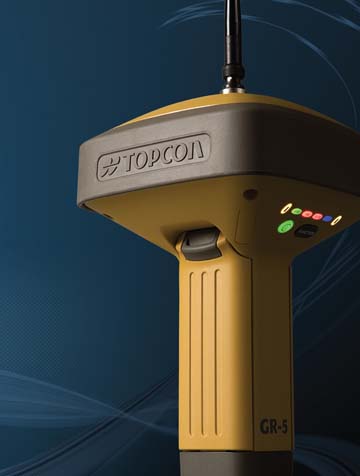 The receiver/antenna unit also comes with an integrated GSM/GPRS or CDMA cellular and Bluetooth 2.0-compliant wireless communications, plus optional integrated UHF TX/RX or 915 MHz spread spectrum radio. The GR-5 is targeted at the survey, engineering, and construction application market segments.

Arranging pins in a sort of array – or “fence” — along patch edges supports an increase in the effective frequency bandwidth of the antenna and at the same time allows for use of stamping technology in manufacturing.

The Fence technology features a vertical two-patch stack that obtains a deep null in backward (down) direction of the resultant pattern, Tatarnikov said. The top patch antenna is an actual (active) antenna and the bottom antenna is a driven (anti-antenna), being excited by the top one by means of electromagnetic coupling.

For dual-frequency functionality, two sets of the two-patch stacks are combined, with the bottom set inverted and attached to the top. According to the company, the antenna design improves the tracking of signals from low-elevation satellites while enhancing multipath rejection.

The GR-5 can be combined with a variety of Topcon field controllers and controller software.