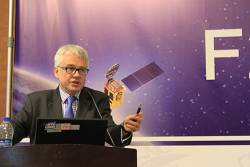 Stuart Riley was born and raised in Nottingham, England, where some of the crucial crossroads in his career appeared quite early.

One such inflection point came when he was just 10 or 11, and it involved a birthday present from his sister, Alison.

Stuart Riley was born and raised in Nottingham, England, where some of the crucial crossroads in his career appeared quite early.

One such inflection point came when he was just 10 or 11, and it involved a birthday present from his sister, Alison.

“She’s two and a half years younger than me,” says Riley. “And, as I was the older sibling, she didn’t necessarily have the same influence on me that an older brother or sister might have, but she was the one that gave me a book about electronics in my pre-teen years, and by doing so she made a real difference in my life and eventual career.”

He had always had an interest in mathematics and science, but the electronics book from little Alison sent Riley over the edge into a full-blown fascination with the subject. He soon started building small circuits and learned how to program a few years later.

Riley cruised through grade school and finished high school in good stead, and then came the insurance detour.

Riley remembers excellent teachers in science and mathematics, but at 18 he still wasn’t sure what he wanted to do. His parents and extended family were supportive, but none of them had been to university, and “I didn’t think it was for me,” Riley recalls.

He thought he might like working in electronics, but instead, as things go, he ended up getting a job working on commercial insurance policies.

So he went ‑ that is to say he ran back ‑ to his old school, got some references from former teachers and, with all the right grades on his record, applied to university.

Riley says working in an insurance office was probably the best thing that had ever happened to him. “I had effectively taken a year out of education when I started at Leeds University, and was highly motivated to succeed so I’d be able to have a career I wanted.”

Growing up, he had never expected to leave Nottingham and was very happy there.

His father, William Riley, worked in a factory for his whole career, operating wood-working machinery to make parts for cars and furniture. His mother, Patricia, had a variety of jobs, along with taking many years out to raise Stuart and Alison.

While university was an unknown within the family, Riley’s parents were happy to see their son getting a good education.

“They very much encouraged me through my university and professional careers,” he says, “although I think they would have been supportive whatever industry or occupation I had gone into.”

Satellite navigation entered his life in 1989, during his final year as an undergraduate when he worked on a project to develop a TRANSIT receiver under Professor Peter Daly. (TRANSIT was the U.S. Navy Navigation Satellite System implemented in the 1960s.) Riley was interested in digital communications and realized that satnav made for a good fit.

After receiving a first class honors degree in electrical engineering, he started a doctoral program, working for Daly. In Daly’s group, Riley, along with other graduate students, worked on multi-frequency/multi-system GNSS receivers, with the focus squarely on GPS and GLONASS. The group was very small but well known in the industry.

“Working with Professor Daly, my specific project was to develop a receiver capable of tracking the L1 and L2 P-code from GLONASS,” Riley recalls. “At the time there were no commercially available receivers capable of doing this.”

Around the time Riley was graduating from the doctoral program, the group won a contract from the European Space Agency (ESA) to develop a proof-of-concept receiver for space applications. Riley stayed on to manage the project as a postdoctoral researcher, focusing on the architecture and firmware.

After about 18 months he decided it was time to go into industry. He was offered a job with Trimble Navigation Ltd. in California and has worked there every since.

Trimble Navigation was founded by Hewlett Packard engineers in 1978, initially focusing on designing and building Loran receivers. However, that same year the first GPS satellite went up, and Trimble turned its attention to the emerging satellite-based technology, drawing on immature GPS receiver designs that the company had purchased from H-P. By the time Riley joined the company, Trimble had gone public and was innovating rapidly.

The Big Step
Joining Trimble thrust Riley into the midst of these activities. His first project was working on the Everest multipath mitigation technique. Patented in the mid-1990s Everest technology enhanced surveying accuracy near buildings, mine walls, vehicles, trees, water, or other reflective surfaces.

When that was finished, Trimble’s application-specific integrated circuit (ASIC) design engineer left for another opportunity. Riley had helped develop the digital baseband of a receiver at Leeds and was asked to lead the design of the new digital ASIC.

It was probably his most challenging project at Trimble.

Riley started out as a team of one, and he had no experience with an ASIC flow. Also, this was the first ASIC for Trimble in which Verilog, a high-level hardware description language, would be used rather than a schematic-capture approach.

He built on his earlier hardware experience with field-programmable gate arrays (FPGAs) and an overall understanding of GNSS baseband architectures, he extended the older architecture to add the new features.

“As I had spent a significant percentage of my short career developing software, I brought some of the best practices along. For example, source control had not been used previously for ASIC design at the company,” he says.

It was Riley’s first ASIC and he really wanted it to be a success; so, he built a rigorous test bench in “C” programming language — at least as rigorous as was possible with reasonable run time on early 1990s computer hardware — to model the ASIC and automate the testing. Trimble still uses a much-extended version of this today, he says.

“Since the first ASIC I was involved in, Maxwell 3, I have either been directly involved in the design of or have managed all subsequent high-precision devices [Trimble has] built.” After that, Riley and a member of the marketing team, identified a gap in the company’s survey portfolio and they suggested a project that became the GPS Total Station 4700 in 1998.

“I was allowed to develop this myself and designed the hardware, leveraged from other designs, and ported our existing code base to the new platform,” he says. “Once I had a proof of concept and the capabilities of the platform were understood, it became a fully staffed project and a larger team helped to complete it and bring it to market.”

With successful projects now stacking up, Riley was made a manager while still spending most of his time as a hands-on engineer. Over the years he took on additional responsibilities, starting with the ASICs, then adding the digital electronics, signal processing, application firmware, RF engineering, and finally the overall product responsibility, including mechanical, project management, and quality assurance teams.

On more recent projects, Riley has been less involved with the hands-on engineering. For example, the 5800 survey system, where he was more heavily involved in the engineering, has morphed into the R4, R6, R8 and more recent evolutions. He was also responsible for the overall development team of the R10, the Infrastructure NetR9, and OEM boards and modules.

On the construction side, Riley oversaw development of the Site Positioning Systems series of GNSS receivers. Although he has no responsibility for Trimble’s agricultural product line, Riley-led engineers do supply the signal-processing library along with key ASICs.

While still mostly responsible for the overall management, Riley has been involved in some engineering aspects of the development of the Trimble’s integrated multi-GNSS/ inertial boards and modules, including products used for unmanned aerial vehicles, with Trimble’s Terrasat team providing the precision engine and Trimble’s Applanix group providing an inertial engine.

Who He Is
Despite his Silicon Valley success, Riley has never lost touch with his roots. His parents still live in Nottingham, and he returns home to see them whenever he can. There is certainly plenty for him to miss about the East Midlands, especially seeing his family, but Riley really likes the California Bay Area where he now lives and has managed to start a new branch of the Riley clan.

Married for 11 years to his wife, Katie, a Maine native who he met in San Francisco, the couple has a son, Ben, just turned nine. “It’s too early to know what he will do when he grows up,” Riley says of the boy. “Like me, he’s interested in science and how things work. So, if he should decide to become an engineer, I’ll certainly be very supportive, but all I want is that he applies himself and tries at whatever he decides to do.”

Balancing parenthood and a demanding job with a heavy travel schedule is an ongoing challenge to find time to be with his family. “I try to make sure I am as connected as possible to Ben and his school, and I think I’ve gotten better over time.”

The Rileys like to get away when possible for long weekends in nearby venues, longer vacations together, and visits to their extended family on the East Coast of the United States and in the UK. “

So there you have it. A child gives her big brother a book. A boy takes the wrong job, and it leads him apply to university. He finds his place in digital design and engineering and an innovative company thousands of miles from home. All of this happens as GNSS technology and applications explode.

GNSS positioning, navigation, and timing says it all.