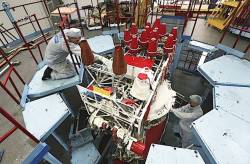 Working on a GLONASS-M satellite at Reshetnev ISS

The Russian GLONASS system, which had appeared to be recovering from a series of organizational and technical problems in recent years, suffered two major disruptions during April.

The Russian GLONASS system, which had appeared to be recovering from a series of organizational and technical problems in recent years, suffered two major disruptions during April.

Beginning just past 1 a.m. Moscow time on April 2 (UTC+4) — 6 p.m. EDT on April 1 — a systemwide failure occurred. Outages continued for more than 10 hours, with the Russian GLONASS monitoring center showing satellites in unhealthy statuses: “failure” and “illegal ephemeris.” The event was attributed to an incorrect uploading of corrections to satellite ephermerides (orbital positions).

A staggered restoration of satellite health in the hours following the outage reflected the need for GLONASS system operators to wait until each satellite passed within range of ground stations on Russian territory to be reset.

Another disruption occurred on April 15, with eight satellites malfunctioning for about 30 minutes and another going off the air entirely. Russia’s Izvestia news quoted Nikolai Testoyedov, general director at JSC Reshetnev Information Satellite Systems, which manufactures the satellites, as saying that the glitches occurred while work was being carried out to update the system.

The problem marks another setback for the Russian GNSS program, which saw the system rebuilt and modernized over the past decade but has stumbled in recent years due to launch failures (including triple-satellite losses in July 2013 and December 2010) and organizational problems, including dismissal of high-ranking space officials in the wake of the launch failures and for charges of corruption.

In one case, the Proton rocket failure was blamed on a premature launch and in another on overfilling of the launcher’s fuel tanks. Successful launch of a GLONASS-M satellite on March 23 had seemed to indicate that the program had regained its footing.

Testoyedov has also announced that the long-awaited launch of the second next-generation satellite — GLONASS-K — would occur at the end of this year.

Meanwhile, Russian lawmakers have endorsed draft legislation to allow the country to set up a GLONASS monitoring facility in Nicaragua. This would add to the handful of monitoring stations, including sites in Brazil and Antarctica, outside the Russian territory, that are essential to managing a constellation in such situations. The U.S. Congress recently rebuffed a proposal to establish GLONASS monitoring stations in the United States.