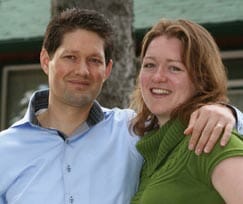 Sandy Kennedy grew up in Miami. Miami, Manitoba, Canada, that is — a town of 150 people with a school, a café, a defunct railroad station, and an ice skating rink.

Now she’s director and chief engineer in charge of receiver core cards at NovAtel Inc., a developer and manufacturer of high-precision GNSS products headquartered in Calgary, Alberta. It’s a long way from where she started, but then again, maybe not.

Sandy Kennedy grew up in Miami. Miami, Manitoba, Canada, that is — a town of 150 people with a school, a café, a defunct railroad station, and an ice skating rink.

Now she’s director and chief engineer in charge of receiver core cards at NovAtel Inc., a developer and manufacturer of high-precision GNSS products headquartered in Calgary, Alberta. It’s a long way from where she started, but then again, maybe not.

“I am the first generation in my family off the farm since time immemorial,” Kennedy said. Her parents are retired farmers, who were born and raised on farms near the same town where they live in today. Until she was 18 she was part of the family business — raising cattle, but mostly growing corn that ended up as alcohol.

“Ours was a mixed farm,” she says. “At that time it was the most northern point in North America growing distillery-grade corn. We just barely had enough heat units. And we had about 50 head of Black Angus cattle. Memories of the farm are my entire childhood.”

Among Kennedy’s most enduring memories are the sunsets.

“Our lane looked due west; so, you could watch the sunset track from south to north every year. When I learned the scientific meaning of the equinox, it was reinforced by the memory of the sun setting exactly at the end of the lane every March and September.”

An astute observation for a youngster, but agriculture isn’t for dummies, and science of a different sort turned out to be her career. Kennedy grew up to become a top engineer in a field that has made life much easier for farmers everywhere.

As the much younger sibling of two older sisters, Kennedy spent a lot of time exploring on her own with a pony or a dog as company.

She remembers building rafts to float on the pond and constructing “tree structures,” as “tree-houses” would have been “too grand a description,” she says.

Outlandish Fortune
It might seem strange for a funny little girl from a farm in rural Manitoba to end up at the apex of 21st-century technology. But are the two worlds — farm and laboratory — really so far apart?

“The farm is a great laboratory! A spectacularly unsafe laboratory!” Kennedy says. “There was plenty of room to experiment and make mistakes, and lots of phenomena to observe.”

She burned things up, cut down trees, built stuff, did engine repair, and learned welding. Watched her dad in the shop and her mother in the house. Farm life taught her how to troubleshoot and gave her the confidence to make something from scratch

Asked whom she would name as an early engineering mentor, Kennedy points to her father, Alan Kennedy. He was not a trained engineer, but a “fix-it-yourself farmer,” says Kennedy. “I sat and passed wrenches from toddlerhood onwards, and I watched him draw up designs for various farm implements in the notebook he always carried in his front pocket.”

“Dad is a tinkerer. He probably should have been a mechanical engineer, but he decided to stay on the farm where he was provided all sorts of opportunities to invent, and he did.”

Her mother, Dulcie Kennedy, was also very good with her hands. She had a home economics degree — one of the few degrees available to women in the early 1960s. “She was an active farm wife, but she and Dad had a traditional division of labor,” says Kennedy. “But she would have made an excellent quality auditor; she’s a stickler for details.”

Kennedy says the “traditional” division of labor only applied to her parents’ working relationship with each other. With three daughters in the house, there was no girls’ work and boys’ work as in many other farm families. “There was just ‘work,’” Kennedy said.

When Sandy was born, her 46-yearold father gave up waiting for a son, she said, and treated her like a boy instead.

When the time came, “Mom and Dad were very supportive of me going into engineering,” she recalls. “I was a top student and engineering is a good career.”

Pivotal Moments
As part of a working farm, Kennedy first heard of GPS in the mid-1990s, about the same time as the early precision agriculture systems were being introduced. However, she learned about the new technology, not on the farm but as a career option when her high school guidance counselor went to a PD Day — a Professional Development in-service for Canadian teachers — and heard University of Calgary Professor Gérard Lachapelle talk about geomatics engineering.

Figuring apart, Kennedy says her love affair with GNSS really gained momentum during her undergraduate years at the University of Calgary. As she learned more about it, she saw more of its potential. “I used to joke that if there was going to be a ‘big brother,’ I at least wanted to know how big brother worked,” she says. I read a lot of science fiction back then!”

On her very first day at university, Kennedy met Arlin Amundrud, another future geomatics engineer and now a commissioned land surveyor. The university sponsored an informal program in which new students were paired with older ones for orientation and advice, Kennedy says. “The older student got a beer ticket for each frosh they took on, and I was beer ticket number five for my future beloved.”

They married during the summer she graduated. Her 16-year-old self would have been appalled, Kennedy says, because she had been a “rage-against-the-patriarchal-norms type of girl. It sounds corny, but I always found him calming and we decided to get married after about six months of dating. There was never any question.”

From Corn Field to Oil Field and Beyond
With the first round of fun out of the way, the real exertion could now begin. Kennedy started working with GNSS in 2000, as a graduate student in the Geomatics Engineering Department at the University of Calgary, under Professor Klaus-Peter Schwarz, an expert in inertial navigation and gravimetry and a former head of the department.

Her research area was airborne gravimetry, and the GPS problem — and, yes, it really was just GPS then as GLONASS was not a factor at that time — was how to derive vehicle accelerations with the lowest noise possible by combining with the accelerometer measurements and a normal gravity model, to derive the gravity anomalies/disturbances in a local area.

It was a very specific niche use of GPS, but it exposed Kennedy to the fine details of GPS carrier phase measurements. Instead of differentiating the time series of positions, she differentiated in the phase domain. “It made a slight improvement in overall vehicle acceleration accuracy,” she says, “and had some operational advantages because at that time ambiguity resolution at long baselines (100km+) was not reliable.”

In 2004, she was hired as a research engineer by NovAtel, Inc. At the time, the company was looking for a way to position seismic geophones — sensors that may remain stationary under heavy tree canopies for days — to better than 50 centimeters using GPS L1 only.

In order to achieve the accuracy goal, she modified the float ambiguity routines to take advantage of the stationary aspect and to handle the poor measurement quality. The field campaign took place in a research forest in British Columbia, where the team completed a conventional total station survey to provide reference coordinates for verifying the GPS achieved accuracy.

This project resulted in a patent that served as proof of concept for an eventual product. Kennedy says, “That was extremely lucky for my first assignment at a new job.”

Kennedy continued her activities as research engineer at NovAtel, working on carrier phase-based positioning in difficult environments, and GPS/INS integration. She then served as a product engineer, working on GPS/inertial integration, algorithm development, and embedded firmware. Until 2010, she was functional manager and technical lead for the Synchronous Position, Attitude, and Navigation (SPAN) product group, which worked on combining GNSS and inertial technologies.

It was during this stretch that NovAtel launched some of its most iconic GNSS/INS products, including the first non-export–controlled, high-accuracy GNSS/INS system in 2006 (a version of SPAN that incorporated iMAR’s FSAS inertial measurement unit) and 2008 (SPAN-CPT with KVH Industries’ fiberoptic gyro and micro-electromechanical accelerometer inertial components).

In 2010, Kennedy was made advanced development manager for integrated navigation systems, working with a small group of senior engineers on applied research projects. Finally, in 2013, she achieved her current position of chief engineer of core receiver cards.

“In 2013, we launched the OEM625S, the first hybrid civilian GNSS (GPS+GLO) and SAASM [Selective Availability/anti-spoofing module] receiver, developed in partnership with L3-IEC,” she says. This product offers centimeter-level real-time kinematic (RTK) positioning using SAASM measurements, falling back to the civilian solution should the SAASM be un-keyed. “It services the military UAV market, which was an early adopter of commercial RTK.”

Life as an Engineer, and an Engineer for Life
Since her husband, his father, and his brother are also engineers, an engineering mindset tends to be the norm in her non-working life as well.

“Building a fence or deck turns into a whole decision matrix of design trade-offs,” Kennedy says. “One is always looking for efficiencies in how the household is set up — minimizing the number trips to the grocery store and food waste. Or, on vacation, you’re enjoying a beautiful seaside view, and the second thought after ‘wow, that’s pretty’ is ‘I wonder what they do for sewage treatment and where it’s located?’”.

It’s not all engineering, though. Kennedy enjoys the great outdoors, with downhill skiing readily at hand in western Canada, as well as scuba diving and travel. “I took a gap year between high school and university and worked as a ‘lifty’ to learn how to ski in the mountains,” she says.

When two intrepid engineers set up house, no one should be surprised at what happened next: intrepid baby engineers.

“My son Anson is four,” Kennedy says. “He definitely shows some early engineering tendencies — like watching how the carnival ride hydraulics work rather than the view. As for my daughter Erica, at six months, she’s too young to tell.”

Indeed, getting the home/worklife balance right can be tricky, Kennedy admits.

“Arlin and I both like our work, and there isn’t really one dominant career. Talking shop at supper is pretty common because we both know enough about the other’s job to discuss things in detail.”

And combining parenthood and a career is particularly tough.

“I can’t work the long hours that I used to because I’m a mom and kids are only young once,” she says. “I am now much more focused on making every minute of my office day count. After all, I’m really only smart for about four to five hours a day anyway.”

And it only works, she says, because husband Arlin is a true partner. “For both kids, I returned to work at halftime after around six months, and Arlin scaled back to half-time for six months to allow me to do that. We switch at noon.”

They both had to negotiate the halftime arrangement with their employers because only full-time parental leave is covered under Canadian law.

“NovAtel has been very supportive, and I do things at odd hours when necessary,” she says.

Half-time, odd-time, all the time, Sandy Kennedy is a great example of where the human side of life meets engineering.