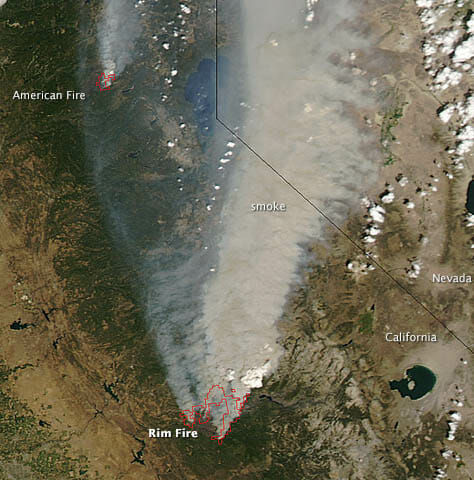 Flying from the Southern California Logistics Airport in Victorville for up to 22 hours without landing, the Predator is capturing and delivering real-time information on remote portions of the wildfire. The UAV is equipped with infrared heat sensors and a rotating camera operated by a remote pilot.

“The impact of this will be significant,” Keegan said. “It will identify where fire activity is located and how it is moving, as well as where it has been controlled.”

The aircraft also will identify safe routes of retreat for firefighters on the scene and verify new fire created by lightning strikes or floating embers. Perhaps sensitive to privacy concerns raised recently over domestic drone operations, Keegan emphasized that the images will be used only to support firefighting operations.

The aircraft’s pilots, located at March Air Reserve Base in Riverside, Calif., will remain in constant contact with Federal Aviation Administration (FAA) air traffic controllers from takeoff to landing and fly over unpopulated areas whenever possible, he said. The flight path generally will be limited to 30 nautical miles of the Rim Fire area, and whenever it flies outside the restricted airspace for the fire, a manned plane will escort it.

The FAA is responsible for issuing permits for domestic use of UAVs on a case-by-case basis, including for the California fire operations. Meanwhile, the agency is leading a congressionally mandated initiative designed to allow expanded civil use of UAVs in the domestic air space.

Meanwhile, nearly a dozen aircraft and crews from the California Air and Army National Guard are battling wildfires across Northern California.

In addition, Air National Guard crews are using two C-130J Hercules air tankers to fight the Rim Fire. Both aircraft are equipped with the Modular Airborne Firefighting Systems II and are capable of discharging 3,000 gallons of water or retardant in less than five seconds. Since their activation Aug. 13, the air tankers have completed 122 drops, releasing more than 333,000 gallons of retardant, Keegan said.

The Rim Fire is not the first in which California has used remotely piloted aircraft technology to support firefighting. In 2007, NASA piloted a similar unmanned aircraft in response to a request from the California Office of Emergency Services and the National Interagency Fire Center.

Those flights were conducted during daytime hours, complemented by nighttime imaging flights from NIFC’s Cessna Citation and an Air Force Global Hawk, both equipped with an earlier-generation infrared camera. Pilots in a ground control station at NASA Dryden controlled the flights via satellite links.

NASA conducted additional remotely piloted aircraft missions in 2008, to monitor wildfires in Southern California, and in 2009, to assess fire damage in Angeles National Forest. The current mission, officials said, is the longest sustained mission by an unmanned aircraft in California in support of firefighters.