This is a very exciting and anxious time of year for boys and girls as they await the arrival of Santa Claus and his bag of toys. Fortunately, for those who need to know exactly when to expect this wonderful arrival, the North American Aerospace Defense Command (NORAD) tracks Santa each year during the holiday season, using satellite systems and high-powered radars to deliver the Santa Tracker.

Families can follow along on the NORAD Tracks Santa https://www.noradsanta.org/ website as jolly ole St. Nick takes his annual journey. Visitors to the website will see a Santa Tracker Countdown and can watch a video featuring “Santa Claus is Coming to Town” performed by the U.S. Air Force Academy Band. The website also features games and other fun activities leading up to Christmas Eve.

According to NORAD, this annual event has a long history dating back to the 1950s. As the story goes:
On Dec. 24, 1955, a call was made to the Continental Air Defense Command (CONAD) Operations Center in Colorado Springs, Colo. However, this call was not from the president or a general. It was from a young child in Colorado Springs who was following the directions in an advertisement printed in the local paper – the youngster wanted to know the whereabouts of Santa Claus.

The ad said “Hey, Kiddies! Call me direct and be sure and dial the correct number.” However, the number was printed incorrectly in the advertisement and rang into the CONAD operations center.

On duty that night was Colonel Harry Shoup, who has come to be known as the “Santa Colonel.” Colonel Shoup received numerous calls that night and rather than hanging up, he had his operators find the location of Santa Claus and reported it to every child who phoned in that night. 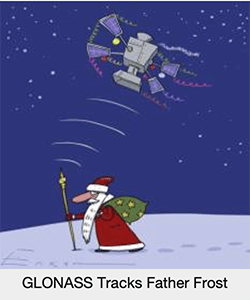 Thus began a tradition carried on by NORAD when it was formed in 1958. Today, through satellite systems, high-powered radars and jet fighters, NORAD tracks Santa Claus as he makes his Yuletide journey around the world.

Every year on Christmas Eve, 1,500 volunteers staff telephones and computers to answer calls and e-mails from children (and adults) from around the world. Live updates are provided through the NORAD Tracks Santa Web site (in seven languages), over telephone lines, and by e-mail to keep curious children and their families informed about Santa’s whereabouts and if it’s time to get to bed.

This year, children and the young-at-heart are able to track Santa through Facebook, Twitter and YouTube. NORAD Tracks Santa has become a magical and global phenomenon, delighting generations of families everywhere.

Santa’s journey begins at 2 a.m. ET, on Dec. 24. He flies down from the North Pole beginning at the International Date Line, then heads west through Asia, down through Africa then back up through Europe before flying across the Atlantic to visit North and South America.

Back in 2010, as Russia’s counterpart to GPS was in development, Inside GNSS reported that GLONASS too was involved in the Santa tracking.

On November 18, 2010, the more secular Russian gift-giver, Ded Moroz or Father Frost, got into the act (on the traditional date of his birthday) with the backing of a commercial firm, Russian Navigation Technologies. The company presented Father Frost with staff bearing an integrated GLONASS receiver.

According to the company, the system was to transmit Father Frost’s coordinates to a special center, which would then publish them on the Internet so that everyone could follow his progress on his traditional New Year voyage.

According to an RIA:Novosti article on the subject, November 18 is considered to be Father Frost’s birthday, and the city of Velikiy Ustyug in Russia’s north, his birthplace. But despite being some thousands of years old, Ded Moroz appears to be an early adapter of Russian technology.
“Technical innovations have become an essential part of modern life,” said Ivan Nechayev, executive director of the Russian Navigation Technologies at the time. “Therefore, Father Frost has mastered computer skills, receives e-mails from children, has blogs in social networks and uses a cell phone to communicate with other magicians.” The GLONASS module installed in the crystal-shaped top of Father Frost’s staff, which is reportedly 180 centimeters long and weighs some kilograms.

According to the NORAD Tracks Santa Twitter account, NORAD’s satellite system is so powerful it can even detect the red glow from Rudolph’s nose. So if you want to track Santa’s journey this week, make sure to check out the NORAD website.