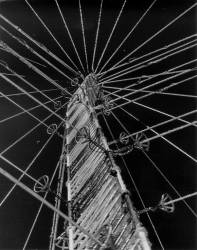 Ice on the tower at Loran Station Dana (Indiana). Photo by Charles Schaaf

President Obama had a big day on October 28, signing 2010 bills for the departments of defense (DoD) and homeland security (DHS) that cut significant programs — eLoran, HIGPS, OCX — connected with the Global Positioning System.

President Obama had a big day on October 28, signing 2010 bills for the departments of defense (DoD) and homeland security (DHS) that cut significant programs — eLoran, HIGPS, OCX — connected with the Global Positioning System.

That may mark the end to a long-running battle by advocates of enhanced Loran (eLoran) to consolidate modernization of the system to improve its timing and positioning capabilities and offer GPS users a ground-based recourse in case of difficulties with the space-based system.

The conference agreement includes and modifies a general provision (in section 559) proposed by the Senate continuing LORAN-C operations through January 4, 2010. Operations will continue beyond that date unless the Commandant of the Coast Guard certifies that the termination of the LORAN-C signal will not adversely impact the safety of maritime navigation and the DHS secretary certifies that the LORAN-C system infrastructure is not needed as a backup to GPS or to meet any other Federal navigation requirement.

If the Commandant and Secretary make such certifications, the Coast Guard is directed to begin a phased decommissioning of the LORAN-C infrastructure and provide a detailed termination plan for the system to the congressional committees within 30 days of certification.

If the required certifications are met, section 559 also permits the Secretary to sell LORAN-C property to offset the costs of environmental compliance and restoration, including costs of securing and maintaining equipment that may be used as a backup to GPS.

Meanwhile, the president also signed the National Defense Authorization Act for Fiscal Year (FY) 2010, which does not include the $59.1 million he requested for the High-Integrity Global Positioning System (HIGPS, also known as iGPS), a demonstration of the capability to use Iridium satellites to enhance current GPS navigation and timing capabilities. The bill also authorizes the GPS III/OCX program at $97.4 million below the amount sought by the White House.

This bill authorizes DoD spending to continue spending for various parts of the GPS program but does not actually appropriate funds from the Treasury. That comes with the defense appropriations bill, which is currently under discussion in a House-Senate conference committee.

The House version of the DoD appropriations also would strike the HIGPS funds, although at last report the Senate version expressed strong support for HIGPS. Both bills, however, also would cut the $97.4 million from GPS III/OCX.