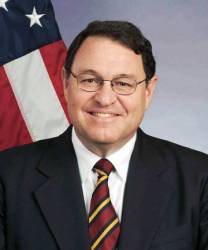 [Updated July 9, 2011] The National Telecommunications and Information Administration (NTIA) on July 6 asked the Federal Communications Commission (FCC) to hold off on allowing LightSquared to begin commercial operations, pending further evaluation of the cellular broadband system’s interference to GPS.
In making the recommendation, Lawrence Strickling, NTIA administrator and assistant secretary for communications and information at the Department of Commerce, cited results from tests conducted in recent months by the National Space-Based Positioning, Navigation, and Timing Systems Engineering Forum (NPEF) to assess the effects on GPS of LightSquared’s deployment plan for high-powered ground transmitters as originally filed.  The NPEF test program was separate from that conducted by a Technical Working Group (TWG) under the FCC’s January order and waiver of limitations on LightSquared’s terrestrial network.

In responding to a question on the subject at a July 6 hearing on federal use of spectrum by the House Committee on Energy and Commerce’s Subcommittee on Communications and Technology, Strickling said, "I think the one conclusion everyone, including LightSquared, has reached so far is that their original operational plan is not going to be one that they can pursue because of the interference it will cause to GPS receivers. And we are in the process now of evaluating the test data to determine what are the options for a different form of operation by LightSquared."

Following an interagency review of the NPEF findings, officials from the U.S. departments of transportation (DoT) and defense (DoD), sent Strickling a letter on June 14, asking him to advise the FCC to continue to withhold authorization for LightSquared to commence commercial service through its proposed deployment of a terrestrial service within the 1525–1559 MHz bands adjacent to the GPS L1 frequency. LightSquared’s proposal is to deploy a network of 40,000 base stations along with some satellite coverage over 139 major markets in the United States.

The June 14 letter, signed by Teri Takai (DoD and Joel Szabat (DoT) as cochairs of the National Executive Committee for Space-Based Positioning, Navigation, and Timing (PNT EXCOM) Executive Steering Group (ESG), noted that the NPEF test results demonstrated “harmful interference to GPS operations.” The ESG letter noted the need “to test and evaluate the feasibility of alternative signal configurations.” In its final report to the FCC on the TWG tests, LightSquared proposed to temporarily transmit only at a lower 10-megahertz frequency — while the TWG evaluation had focused on the company’s initial plan to begin broadcasts in a band nearer to GPS.

A Thursday (July 7, 2011) news release from the National Coordination Office for Space-Based PNT said  departments continue to support the National Broadband Plan, "but  cannot do so at the expense of a global, ubiquitous utility such as the  Global Positioning System."

NTIA represents the interests of federal agencies in spectrum matters, and the FCC is obligated to coordinate its decisions with NTIA.