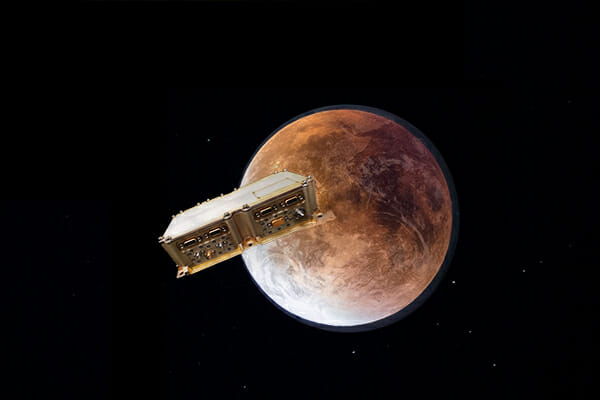 The European Space Agency (ESA) selected SpacePNT of Neuchatel, Switzerland to develop an advanced spaceborne GPS/Galileo receiver for agency’s the Lunar Pathfinder Spacecraft in orbit around the Moon. The receiver is intended to demonstrate, for the first time, the use of terrestrial GNSS signals for real-time and autonomous orbit determination and positioning, navigation and timing (PNT). The contract includes the development, qualification, and delivery of one proto-flight model (PFM) and two engineering models of the NAVIMOON receiver, SpacePNT’s very high-sensitivity version of its NAVILEO high-performance GNSS spaceborne receiver.

The NAVIMOON receiver implements very high-sensitivity algorithms able to receive and process signals extremely attenuated coming from the spillover around the Earth of the signals transmitted by GNSSs. It will combine these signals’ measurements with advanced on-board orbital forces filters to achieve directly onboard the spacecraft and in real time an unprecedented target orbit determination accuracy of 100 m rms at Moon altitude. This is is well below the typical accuracy that can be achieved today with terrestrial radio ranging that involves the use of costly deep space station ground infrastructures.

As explained in a March 26 news story, GNSS constellations already deliver usable signals as far away as the moon, even though they were not purposed to do so. Most of the energy of their navigation antennas radiates directly towards Earth, which blocks its use further away in space. However, explains Javier Ventura-Traveset, ESA GNSS Senior Advisor, “navigation signal patterns also radiate sideways, like light from a flashlight, and past testing shows these antenna side lobes can be employed for positioning, provided adequate receivers are implemented.”

Given the high interest in Moon exploration and colonization (over 50 commercial and governmental missions have been announced between now and 2024), it is expected this NAVIMOON receiver technology will play a significant role in the next decade not only on Earth-Moon transfer orbits, but also to provide enhanced PNT services for the Moon users with the deployment of a lunar constellation that will allow the provision of lunar navigation in Moon-obstructed areas.

Due for launch by the end of 2023 into lunar orbit, the public-private Lunar Pathfinder comsat will offer commercial data relay services to lunar missions – while also stretching the operational limits of satnav signals.

SpacePNT will partner with European Engineering & Consultancy (EECL) from Kingston-upon-Thames, UK as a sub-contractor for the electronics design, manufacturing, and qualification.