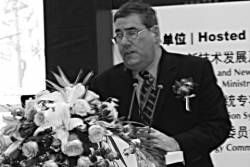 The United States brought a strong message that it is pursuing a new direction in GNSS relations with China in presentations at the 2010 NaviForum in Shanghai last week.

The United States brought a strong message that it is pursuing a new direction in GNSS relations with China in presentations at the 2010 NaviForum in Shanghai last week.

Until now, discussions of the subject between the two countries has taken place almost exclusively in multilateral forums, such as the United Nations-supported International Committee on GNSS (ICG), the Asia Pacific Economic Cooperation GNSS Implementation Team (APEC-GIT), and the operator-to-operator frequency coordination under the auspices of the International Telecommunications Union (ITU).

U.S. space policy has “new language and a new direction,” Russo said, adding that “international cooperation . . . is a priority for the United States government” through both bilateral and multilateral agreements. Russo also underlined elements of President Obama’s recent National Space Policy that “foreign PNT systems may be able to strengthen the resiliency” of civil GPS services.

Russo had foreshadowed his remarks at NaviForum in an interview with NAVIBIZ, a Chinese electronic newsletter focused on the telematics industry.

“President Obama’s new National Space Policy, signed this summer, explicitly directs us to engage with foreign GNSS providers to encourage not only compatibility, but also interoperability,” Russo told NAVIBIZ in response to the question: Will the U.S. consider close cooperation with the Compass, in terms of civil and even military use?

“[The policy] also permits us to use foreign PNT [positioning, navigation, and timing] services to augment and strengthen the already robust performance of GPS,” Russo said. “The Compass system wasn’t specifically mentioned, but it wasn’t excluded either; so, the door is open to discussion on this point. Obviously there are many issues — both technical and political — to work out among the key representatives of both countries.”

Russo’s message was reinforced by another U.S. keynoter, Jeff Auerbach, an advisor on GNSS affairs for the State Department’s Office of Space and Advanced Technology. “The U.S. is interested in engaging in further bilateral discussions with China on civil GNSS services and applications,” Auerbach said.

Auerbach also underlined U.S. satisfaction with progress made at ICG-4 at St. Petersburg, Russia, particularly adoption of new principle on transparency for open services:  “Every provider should publish documentation that describes signal and system information, policies of provision and minimum levels of performance for its open services.”

Organized by the Shanghai International Exhibition Co., Ltd., the event was hosted by the China Second Generation [Compass/Beidou-2] Satellite Navigation System Project Management Center, which oversees development of the Compass system.
Ran Chengqi, deputy director of the Compass center, welcomed the conference attendees and later presented a keynote address on the Compass program development. Ran offered little new insight into plans for Compass, other than to mention that another satellite would be launched later this year. China has already launched three Beidou-2 spacecraft in 2010.

Other host organizations included the Department of High and New Technology Development and Industrialization, for China’s Ministry of Science and Technology (MOST), and the Science & Technology Commission of Shanghai Municipality. Inside GNSS served as the “global media sponsor” for the event.

No Compass ICD Yet
Hope for an early release of the draft interface control document (ICD) for Compass — a fourth revised version of the interface specification reportedly has been complete for nearly a year —remains unfulfilled, frustrating some companies’ efforts to design Beidou-compatible user equipment.

Gengsheng Zhang, an engineer from Qualcomm Inc., asked members of a panel discussing development of the Beidou civil application market, “Does the Chinese government have a clear timeline for releasing the ICD? What hasn’t it announced the codes?”

Yang Qiangwen, a senior Compass engineer, acknowledged that the national government has still not reach resolution on the issue. “I have attended many meetings” on the subject, Yang said. “One view is that the earlier, the better; another view is to create a buffer” before release of an ICD, he said.

In earlier remarks during the panel discussion, Yang admitted that the task of designing and developing a GNSS system is not trivial. "Whether we can build a good system that can provide a . . . stable service — this is a big challenge,” he said. “The Beidou system has come along very quickly . . . and has come a long way. But we are still facing many technical problems. [The Compass program] needs more participation by many experts.”

What may have been lacking in new information from the Beidou program and Chinese government was compensated in good measure by the strong participation of Chinese industrial leaders, who expressed broad support for the program.

In his keynote presentation, Ran Chengqi emphasized the government’s desire to promote Compass and its applications. The Compass project management center would encourage Chinese entrepreneurs and provide technical support as well as support for the drafting of appropriate policies and regulations to create a stable framework for Compass development.

Ran predicted that with completion of a regional Beidou-2 constellation by 2010, that Compass would see applications in intelligent transportation systems, such as monitoring marine and land navigation and providing real-time traffic information to vehicles.