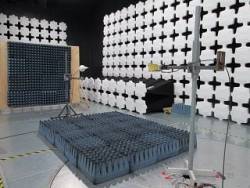 The National Institute of Standards and Technology (NIST) announced that National Advanced Spectrum and Communications Test Network (NASCTN) will hold a public meeting on May 4, 2017 to inform the public about the NASCTN project “Impact of Long Term Evolution (LTE) signals on Global Positioning System (GPS) Devices”.

The National Institute of Standards and Technology (NIST) announced that National Advanced Spectrum and Communications Test Network (NASCTN) will hold a public meeting on May 4, 2017 to inform the public about the NASCTN project “Impact of Long Term Evolution (LTE) signals on Global Positioning System (GPS) Devices”.

At this meeting, the public will learn about this project, as described in the report released to the public on February 15, 2017, available at: http://nvlpubs.nist.gov/​nistpubs/​TechnicalNotes/​NIST.TN.1952.pdf. A summary of NASCTN’s test methodology and an overview of the test results will be provided as well.

The meeting will be held at MITRE Campus, Building 1, 7525 Colshire Drive, McLean VA, 22102. Directions to the MITRE McLean Campus are available at: https://www.mitre.org/​sites/​default/​files/​pdf/​mclean-campus-map.pdf. The meeting will also be accessible via WebEx.

NASCTN provides a forum for addressing spectrum-sharing challenges to accelerate the deployment of wireless technologies among commercial and federal users. NASCTN was created in 2015 and is a joint effort among NIST, the National Telecommunications and Information Administration, and the United States Department of Defense. NASCTN’s mission is to provide robust test processes and validated measurement data necessary to develop, evaluate and deploy spectrum sharing technologies that can increase access to the spectrum by both federal agencies and non-federal spectrum users. NASCTN conducts projects with private sector entities via Cooperative Research and Development Agreements (CRADA). NASCTN has completed the “Impacts of LTE Signals on GPS Receivers” project and released the NASCTN report “LTE Impacts on GPS” in February.

The focus of this NASCTN project, proposed by Ligado Networks in 2016 and conducted under a CRADA between NIST and Ligado Networks, was the development of a test methodology to: (1) Investigate the impact of LTE signals on GPS devices that operate in the GPS L1 frequency band; and (2) perform radiated radio-frequency measurements on a representative set of GPS devices to validate the test methodology.

In the March/April 2017 issue of Inside GNSS, columnist Dee Ann Divis reported on Ligado test results. Additionally, for more on Ligado’s plans on a GPS augmentation service, click here.

At the start of the project, NASCTN convened a panel of technical experts to develop a test plan with the following objectives: Develop a test plan that is transparent, reproducible, and well-calibrated; develop sound, statistically-valid data retrieval and processing techniques; provide a clear path from measurement setup, to data collection, to processed results; and provide data to inform discussions between different interested parties on proper measurement requirements. The goal was to make reproducible measurements under clearly-defined test conditions to isolate impacts of radiated LTE signals on GPS receivers, and to allow others to make comparable measurements if desired. To accomplish this, the approach aimed to measure the response of selected GPS devices given well-controlled GPS and LTE power levels under fixed, stable thermal noise conditions, while limiting the number of other extraneous variables.

In May of 2016, the NASCTN team completed the draft test plan and distributed it to a cross-section of GPS manufacturers, federal agencies, and spectrum regulators and released it publicly for comments to obtain technical feedback on the proposed method. Over a two-month period, NASCTN received 159 comments from 10 different organizations. The NASCTN test team reviewed the comments and developed a revised test plan in July of 2016 that addressed the technical issues raised in the comments. The draft test plan, the revised test plan, and the adjudicated comments from the review process are all publicly available on the NASCTN Web site at: https://www.nist.gov/​programs-projects/​impact-lte-signals-gps-receivers.
Over a three-month period, from August through October 2016, NASCTN performed the radiated measurements associated with this project at two facilities—a semi-anechoic chamber at National Technical Systems in Longmont, Colorado and at a fully-anechoic chamber at the NIST Broadband Interoperability Testbed facility in Boulder, Colorado, using the revised test plan.

NASCTN relied on technical staff from NIST and the U.S. Army’s Electronic Proving Grounds to perform and validate the measurements and collect the data. The team was multi-disciplinary, including expertise in GPS devices and simulation, radiated radio-frequency measurements, timing measurements, microwave metrology, statistical analysis and data processing.

In total, NASCTN performed 1,476 hours of testing and collected more than 19,000 data files for a variety of measurands, including carrier-to-noise-density ratio (C/N0), 3D position error, timing error, number of satellites in view, time to first fix, and time to first reacquisition, that were collected from a number of GPS devices at a baseline condition (no LTE signals present) and over a large range of LTE signal power levels. Subsequent data processing yielded a set of 3,859 anonymized data files (780 MB) that may be requested here: https://www.nist.gov/system/files/documents/2017/02/15/impact_of_lte_on_gps_-_measurement_data_request_form.pdf.

Due to significant interest in these measurements by regulators for assessing LTE signals on performance of GPS devices, federal agencies, and the GPS community, NASCTN is hosting a public meeting to provide an overview of the project, the test methodology and the test results. NASCTN will also answer questions on the project, the testing methodology and the test results. The final agenda for the public meeting will be posted on the NASCTN Web page.