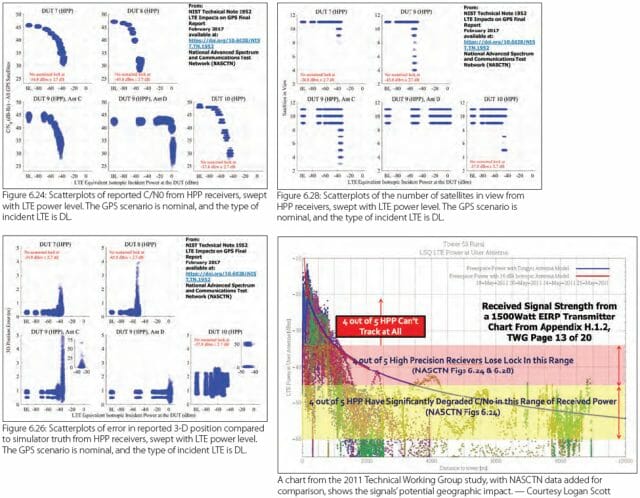 The GPS community and Virginia-based Ligado are weighing new and upcoming test results as the standoff over interference with satellite navigation services enters its seventh year.

The dispute centers on the company’s now modified proposal to build a terrestrial wireless network supported by frequencies originally allocated for satellites. Though there had been a move some years earlier to augment the satellite services with ground stations the company’s first plan envisioned some 30,000 high-powered ground terminals.

The GPS community and Virginia-based Ligado are weighing new and upcoming test results as the standoff over interference with satellite navigation services enters its seventh year.

The dispute centers on the company’s now modified proposal to build a terrestrial wireless network supported by frequencies originally allocated for satellites. Though there had been a move some years earlier to augment the satellite services with ground stations the company’s first plan envisioned some 30,000 high-powered ground terminals.

Ligado’s frequencies neighbor the band relied upon by GPS and tests in 2011 showed the proposed network would overload the vast majority of GPS receivers. The Federal Communications Commission (FCC) put the project on hold early in 2012 and the company filed bankruptcy not long thereafter. It reorganized, emerging from Chapter 11 late in 2015 and soon changed its name from LightSquared to Ligado. It modified its network plan, but deep concerns over GPS interference continued.

Since exiting bankruptcy Ligado has been pressing the FCC for approval to build its network. Last year it poured more than $1.5 million into lobbying, according to filings with the Lobbying Disclosure Act database, and it funded studies of its own aimed at convincing the FCC to pull the broadband plan off the back burner.

Roberson released a study in May 2016 that, despite efforts to put the outcome in the best light, showed that Ligado’s broadband signals would impact several different GPS receivers. In December 2016, a summary of another Roberson test on signal reacquisition times, posted on the FCC docket by Ligado without comment, also showed impacts to some receivers.

Ligado used Roberson’s research to press for a change in the way interference is assessed. They had the firm measure position error as well as the carrier-to-noise-density ratio (C/N0). Changes in the signal-to-noise ratio are the internationally accepted metric for determining levels of interference. Ligado asserted that position error was a better choice — a proposal that has, so far, failed to gain traction.

“Roberson’s use of measures of harmful interference other than the established standard of a 1 dB increase in the noise floor is not appropriate, as the record before the FCC amply demonstrates,” said Jim Kirkland, general counsel and vice-president of Trimble in a statement issued in response to the May 2016 Roberson test results. “Precision GNSS products like Trimble’s control important processes such as construction machine guidance at a level of precision that cannot be reliably observed by Roberson’s tests.” See here.


Using position error would favor Ligado’s signals and allow damaging levels of interference to GPS receivers, said Logan Scott, a GPS signal expert and a consultant specializing in radio frequency signal processing and waveform design for communications, navigation, and other systems. GPS receivers can give accurate position information even when experiencing serious interference, he explained in an interview last year. As long as they are tracking satellites they can provide fairly accurate positioning information right up to the point where the interference causes them to lose their lock on the satellite.

Though Ligado continues to press for a position error standard at least one expert thinks the matter is settled.

Tim Farrar, a technology consultant specializing in the satellite industry who has followed the Ligado saga closely, believes the firm has failed to persuade decision makers that position error is the better metric.

NASCTN Reports
Ligado’s project with the NASCTN also incorporated position error. NASCTN is a national network of federal, academic, and commercial test facilities formed by the National Institute of Standards and Technology (NIST), the Department of Defense (DoD) and the National Telecommunications and Information Administration (NTIA).

NASCTN’s self-described mission to accelerate deployment of wireless technologies raised doubts about its impartiality when the tests were announced — doubts that sharpened when it became clear Ligado, and not NASCTN, was crafting the research questions. Among the issues the project was designed to examine was the “preference” for using changes in C/N0 over other measures, including position error, to evaluate interference.

The work got off to a controversial start with a test plan that was developed with limited input and then sprung on the GPS community — which then had just a few days over a weekend to provide feedback. NASCTN said at the time, however, that “to preserve its neutrality,” it would provide robust test methodologies and validated measurement data but “not make policy recommendations based on this data.” Moreover, NASCTN told Inside GNSS that it would “not make any policy-related interpretations associated with the test data,” although it “will likely make recommendations about testing methods.” See here.

The group released a 428-page report in February, describing its work and the tests it developed. As promised they are also making the data available. A request form for the data CD and a link to the report are here.

“They did a very competent job,” said Scott, who noted that their conclusions, as promised, were focused on the tests themselves. “Their conclusion was that you needed a high level of automation to conduct these tests.”

Damages
Scott reviewed the report and found the data in its charts was “pretty much consistent” with the Roberson tests, the tests done by the Technical Working Group (TWG) in 2011 that first clarified the levels of interference and the initial results of the Adjacent-Band Compatibility (ABC) Assessment now being conducted by the Department of Transportation (DoT).

“Basically what they’re showing is, you start transmitting high-power next to GPS, you’re going to damage national infrastructure,” Scott told Inside GNSS.

Scott’s perspective is in stark contrast to the interpretation put forth by Ligado, in a February 24 letter to the FCC. (Interestingly, the letter described the NASCTN project simply as a “Government study” and did not mention the firm’s sponsorship.)

“This comprehensive 428-page study that involved 1,476 hours of testing,” they wrote, validates the conclusion reached by the major GPS companies over the last 14 months: An LTE network operating within the specifications proposed in Ligado’s pending FCC applications will not harm the performance of GPS devices.”

Scott vehemently disagrees with the interpretation. “The report does not say that and the report actually provides quite a bit of evidence that (the network) will cause harm. How they reached this conclusion from this report is just beyond me because the data in the report very clearly shows damage.”

The difference in views appears to hinge on Ligado’s continued assertion that position error is the appropriate yardstick for interference.

“The government study found no impact on the position and timing accuracy of many GPS devices when exposed to mid-band LTE signals at significantly higher power than they would be under Ligado’s proposal,” the Feb. 24 letter said. The charts in the study, they continued, “illustrate that the study confirms Ligado’s prior submission in the record that a 1 dB-Hz decrease in the carrier-to-noise-density ratio (C/N0) is not the appropriate standard for assessing harm to GPS receivers.”

Charts 6.24 and 6.28 from the study, however, show several of the receivers losing satellite lock as the signal power increases though it is not possible to determine which devices those are. The study lists the receivers tested, but it does so in such a way that specific results cannot be attributed to a specific piece of equipment.

Scott pointed out that the geographic impact of the network’s signals, based on the study’s data in Figure 6.24, could be substantial.

“So what kind of range is associated with that at the powers you’re talking about?” said Scott. “You’re talking about something of the order of 5 kilometers. So, you turn on a Ligado base station and 5 kilometers away there are high-precision receivers that are dying. And I don’t just mean degrading, I mean dying. Dead. Unable to operate.”

Scott explained that his conclusion is not based on NASCTN data, as NASCTN did not measure for such impacts, but on data from the TWG — the cadre of researchers who first looked at the LightSquared/GPS interference issue in 2011. Those researchers conducted tests at the same signal power that Ligado is now proposing, he said. To compare the two sets of data he annotated a chart based on TWG part 4 measured signal strength with boxes based on data from the NASCTN report. High-precision “receivers could experience total failure at ranges > 4 kilometers,” he said.

Scott noted also that there are reference receivers among the devices tested and that position error measurements would not reflect damaging interference to those receivers.

The Adjacent-Band Assessment
The results from what, potentially, could be the most impactful study, however, are yet to come.

The ABC Assessment is a two-phase effort to determine the power limits by frequency, that is the interference tolerance masks (ITM) needed to protect both existing and future GPS receivers. The ABC Assessment is looking at a range of receivers and was developed with significant community input, including input from Ligado, which has been unhappy with the fact that it relies on C/N0.

The first round of results, released in October, confirmed that cell phone receivers were the least sensitive and high-precision receivers the most sensitive, which tracks with earlier tests. Interestingly the masks developed for certified aviation receivers, which would seem likely to be restrictive, were not enough to protect other kinds of receivers. See here.

The ABC Assessment is “very conservative and therefore going to be pretty difficult [for Ligado] in terms of the power limits that are going to be imposed on the transmitters,” said Farrar. “…Obviously Ligado would, presumably, hope the FCC would just agree to the limits that Ligado proposed previously. But [Ligado’s proposed limits] are not likely to be viewed particularly positively [if the DoT is much more conservative].”

As of press time, the second round of data from the ABC Assessment was set to be released March 30. More details on the Global Positioning System Adjacent Band Compatibility Assessment can be found online here.