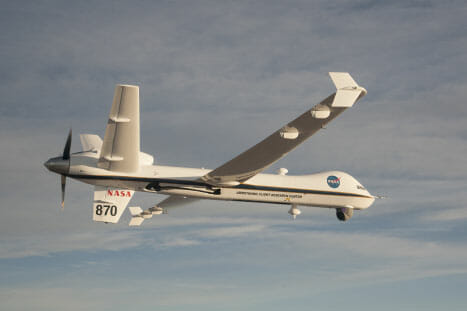 As NASA’s new exploration spacecraft Orion made its way back to Earth from its first test mission, the Ikhana unmanned aircraft system captured its return—making it possible for NASA to stream the parachute deployment and splashdown footage on live television.

As NASA’s new exploration spacecraft Orion made its way back to Earth from its first test mission, the Ikhana unmanned aircraft system captured its return—making it possible for NASA to stream the parachute deployment and splashdown footage on live television.

Designed to carry astronauts to destinations in deep space, including an asteroid and Mars, Orion was launched from Cape Canaveral Air Force Station in Florida on December 5, a day after the initial launch was postponed. The uncrewed Exploration Flight Test 1 (EFT-1) sent Orion through the Van Allen Belt twice, where it experienced high periods of radiation, reached an altitude of 3,600 miles above the Earth and hit speeds of 20,000 mph. Eventually, Orion will travel to Mars with astronauts on board.

As it returned from its mission and prepared for splashdown in the Pacific Ocean 4.5 hours after takeoff, the GPS/inertial-guided Ikhana was on hand to capture the historic moment on video.

Herman Posada, a UAS research pilot, helped ensure the Ikhana UAS was properly positioned and ready to capture the splashdown. As the launch pilot, Posada arrived at the NASA Armstrong Flight Research Center on Edwards Air Force Base at 10 p.m. the night before to prepare the Ikhana for a 2 a.m. departure. The Air Force base is about 984 miles away from the splashdown location, and the Ikhana was equipped with 24 hours of fuel for what was expected to be an 18 to 24 hour mission.

Most missions only take four or five hours, Posada said, and this mission required two pilots for a much longer time span. Four pilots, two from Armstrong and two from Nevada Air National Guard, worked the mission over two shifts.

When the Ikhana arrived at the recovery site, the San Antonio-class amphibious transport dock ship USS Anchorage was already in position to retrieve the Orion after splashdown, another successful part of the test flight, while a P-3B Earth Science Aircraft was stationed at a higher altitude to collect data on the heat shield and any anomalies that occurred during re-entry.

“We got to the recovery zone about an hour and a half before Orion was expected to return so we could position the plane and look at other assets in the area,” Posada said. “We needed to get the right angle, see the cloud cover and prepare to get a good picture of the moment of truth.”

NASA first acquired the Ikhana in 2006 to support Earth science missions and advanced aeronautical technology development. It is 36 feet long with a wingspan of 66 feet, and can fly for more than 20 hours and reach altitudes above 40,000 feet. For this mission, Ikhana came equipped with an infrared camera and day cameras, housed in the skyball mounted on the aircraft’s underside.

This equipment captured the Orion capsule as it re-entered the Earth’s atmosphere, through parachute deployment and splashdown. The infrared camera detected the capsule and a sensor operator pointed the optical camera for visual sighting of the module. The Ikhana was positioned at a 27,000 feet altitude as the Orion made its descent.

“We knew the trajectory of the capsule, we knew to look west and that it would be 4,000 degrees and coming from space,” Posada said, noting pilots from the Nevada Air National Guard operated the skyball over the course of the mission. “We knew it would be moving through the air very fast and very hot. The skyball identified the capsule as it re-entered then we toggled back and forth from infrared camera to day camera.”

The video Ikhana captured was sent in real time via satellite to NASA TV, where Orion’s descent and recovery was broadcast live.

The idea to show the splashdown in real time came from NASA TV, Posada said, and it took them about two months to prepare Ikhana’s flight plans and to obtain all the necessary permissions for the mission. The Ikhana stayed onsite for about 2.5 hours, returning to the air base around 4 p.m. The mission took about 14 hours.

“This was pretty historic. A home run. We’ll do more of this if the weather’s good,” Posada said. “Weather is a big thing. The plane needs to be in clear weather. The cameras can’t see through the clouds.

NASA’s Broader UAS Role
Ikhana’s video capture of the Orion splashdown was a huge success, but it certainly isn’t where NASA’s involvement with UASs ends. NASA’s Armstrong Flight Research Center is also leading a project designed to help integrate UASs into the airspace.

The Unmanned Aircraft Systems Integration in the National Airspace System project, or UAS in the NAS, is designed to find ways to reduce technical safety and operational challenges with incorporating UAS into the airspace.

In 2012, NASA used the Ikhana to test an Automatic Dependent Surveillance-Broadcast device. ADS-B is an aircraft tracking technology that determines a plane’s position using satellite navigation.

Ikhana is now using ADS-B and other technologies in flight tests of Autonomous Collision Avoidance System for UAS (ACAS-Xu). These tests will provide information about safe approaches that will advance autonomous collision avoidance and self-separation of aircraft.

Posada recently piloted two unmanned flights to test detect and avoid capabilities. In one test they used an unmanned aircraft vs a manned aircraft, and one involved self-separation.

“There’s a big push to get these airplanes to fly around like any other airplanes. “We’re trying to improve the technology to detect other aircraft,” Posada said. “There’s been a big effort on NASA’s part to help improve this technology.”